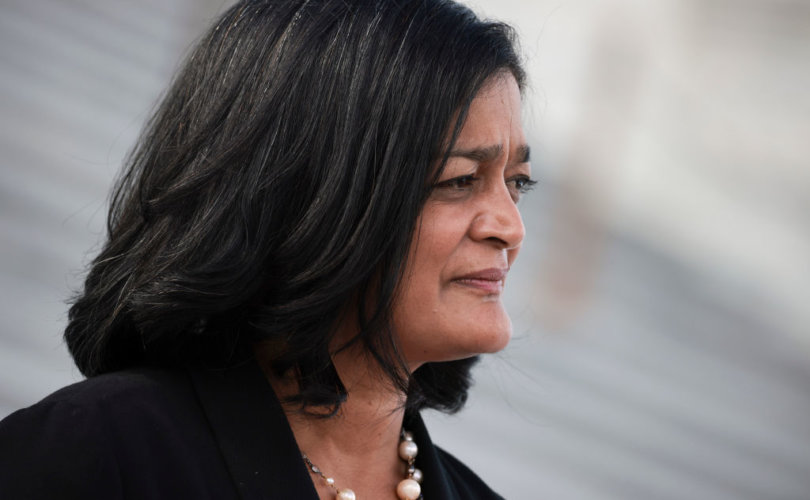 (LifeSiteNews) — Democratic Rep. Pramila Jayapal talked in a recent interview about the premature birth of her first child Janak, and the abortion of her second pregnancy.

Jayapal’s failure to work through the emotional and spiritual aftermath of these traumatic events is likely contributing to her fervent pro-abortion activism.

Rep. Jayapal told NBC News some of the challenges she faced with the pregnancy and premature birth of her daughter Janak, and her own struggle to manage the stress, leading to postpartum depression. Things got so dark that Jayapal contemplated suicide for a time.

In the aftermath of this difficult period, despite being on contraceptives, she faced an unplanned pregnancy. Jayapal said about the decision to abort her second child, “I just realized that there was no way I could have another baby at that time and that I could not go through what I had gone through.”

Sadly, her partner at the time, and future husband, did not fight for the life of his child. The couple aborted their tiny baby, daughter Janaks’ sibling.

Any couple who has faced a challenging pregnancy and premature birth can sympathize with the extreme levels of stress, anxiety and grief that accompany such times. In the darkness and desperation of a crisis, abortion can seem a reasonable and compassionate solution. This is especially true for those without the life-affirming religious and moral support to process their decision.

Jayapal’s sharing of her story in this public context on NBC News, and to a House Committee on Oversight and Reform, likely points to an unconscious need for deeper healing. But without such healing, she went on to exploit her personal trauma to advance a pro-abortion agenda.

No doubt Jayapal is sincerely convicted of the righteousness of her cause. Many women and men will listen to Jayapal’s story, have great sympathy with their situation, and agree with their decision to end the pregnancy.

Tragically, while abortion seems an attractive solution in the darkness of a crisis, there are serious consequences when we assume God’s providence over human life.

It is essential to work through experiences of traumatic loss and abuse in an integrated spiritual and emotional healing program. Failure to do this healing work, can have destructive consequences, like invisible shockwaves emanating from a powerful explosion.

Rep. Jayapal’s failure to work through her trauma and find life-affirming support in her second pregnancy is likely channeling her emotional energy related to trauma and grief into pro-abortion activism.

This is not a new phenomenon.

We see this dynamic powerfully displayed at ground zero of the abortion shockwave, the 1973 Roe v. Wade decision to legalize the procedure.

But years before this landmark case, in the fall of 1967, Sarah and her partner faced an unplanned pregnancy. Abortion was still illegal in Texas, so Weddington traveled to Mexico to end the life of the child in her womb.

Norma McCorvey talked in a radio interview about her lunch meeting with Sarah Weddington in 1970. Sarah was trying to convince Norma to be a plaintiff in the case. Norma already had 2 children and a failed marriage, with a family history of abuse and addiction.

Norma said in that interview that their meeting was held on the anniversary date of Sarah’s abortion in Mexico.

After her personal abortion in 1967, Weddington repressed her abortion-related pain and the natural need to reconcile and heal this loss. In addition, Weddington sought to master her own traumatic loss by focusing this intense emotional energy into a movement to empower other women with the same “reproductive choice.”

The lunch meeting with Norma McCorvey was a powerful episode of traumatic re-enactment that contributed to the death of roughly 65 million children in the womb.

Other pioneers of “reproductive rights,” such as Kate Michelman, who served for many years as the director of the National Abortion Rights Action League (NARAL), and feminist Gloria Steinem zealously promoted “reproductive rights” after their personal experience of abortion.

Leslie Blackwell of the Silent No More Awareness Campaign says about her pro-choice activism after an abortion:

I discovered I was pregnant and I had just landed my dream job as a TV Talk Show Host. A roommate drove me to an abortion clinic in Greensboro, N.C. After graduation, I threw myself into the new job creating a façade of the perfect young career girl who had it all together … drinking, drugging and sleeping around … self-destructing. Trying to validate my choices, I became a strong pro-abortion supporter and at times militant with anyone who didn’t agree with my opinion.

As we see with every abortion, the shockwaves of that choice reach far beyond the individual and their personal life and relationships.

As outlined in our book Rivers of Blood/Oceans of Mercy, once the unresolved emotional trauma and spiritual wounds of abortion and other abuse are aligned with political power, you can be sure that over time the fruits will be increased moral blindness, social division, and death.

Today I have given you the choice between life and death, between blessings and curses. Now I call on heaven and earth to witness the choice you make. Oh, that you would choose life, so that you and your descendants might live! (Deuteronomy 30:19)

There is way that leads to life, light, and truth. Read and view the stories of the women and men of the Silent No More Awareness Campaign. Learn from them as they share about their lives in the after-math of abortion, and the journey to discover the great blessing of God’s merciful healing.

Kevin Burke, LSW, is a pastoral associate of Priests for Life and co-founder of Rachel’s Vineyard. An expert on men and abortion loss, he is the author of Tears of the Fisherman and co-author of Rivers of Blood/Oceans of Mercy.