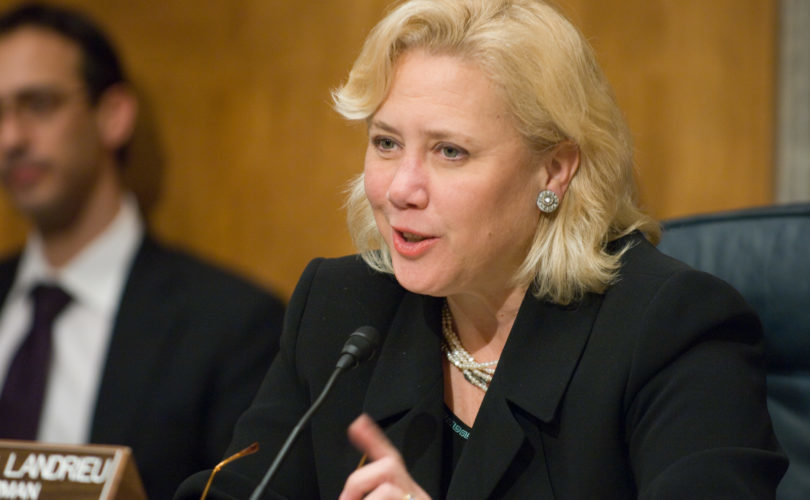 Last week, Louisiana Gov. Bobby Jindal signed a bill that would, like its sister law in Texas that became law in 2013, increase the quality of care for women seeking abortions. The law passed with enormous bipartisan support.

Even bipartisan support for the unborn and their mothers, however, didn't stop one prominent Louisiana politician from speaking out against the bill. Last week, Sen. Mary Landrieu, D-LA, told Politico, “Although I personally believe that life begins at conception, I believe the last place the government needs to be is in the church, in the doctor’s office or in the bedroom.”

Landrieu's comments, which rely heavily on hypocrisy and misdirection, come as the three-term senator fights for her political life against Republican Bill Cassidy. Landrieu also said, “Some of the bills being passed around the country are just very intrusive to personal decisions and very harmful to women and girls, you know, to their physical health and life. It’s a shame.”

“20 weeks is not the norm for being able to live outside of a hospital,” according to the senator.

As noted above, these comments rely heavily on misdirection and an attempt to shut one's eyes to the realities of abortion.

Democrat Sen. Mary Landrieu: “Although I personally believe that life begins at conception, I believe the last place the government needs to be is in the church, in the doctor’s office or in the bedroom.”

First, despite saying that she agrees with the indisputable science of when life begins, Landrieu states that she believes abortion is just fine. While this is a common position in modern American politics, consider her comments in another light, from another time in American history: “I believe black people are human beings, but it's okay to enslave them some of the time.”

Or: “I believe that a child born yesterday is a human being. But government should not be involved in protecting the life of that child — parents should have flexibility.”

Landrieu's inconsistent logic doesn't end there. As Republican National Committee spokesman Ben Voelkel noted last week to Louisiana press, Landrieu's statement about opposing a government presence in the bedroom flies in contrast to her consistent support for the Affordable Care Act. The Affordable Care Act involves itself in everything from businesses to bedrooms to wallets, purses, churches, and even thought-crime vis-a-vis the individual mandate.

Likewise, Landrieu's comments about how pro-life laws are “very harmful to women and girls…to their physical health and life” ignores the reality on a) the unborn women slaughtered in the womb, and b) how the Louisiana and Texas laws, which are virtually identical, rely on providing greater standards of care for abortion clinics, so that women who go for abortions in those states will be treated better by the often sub-standard medical professional at abortion clinics.

Finally, Landrieu said “20 weeks is not the norm for being able to live outside of a hospital,” but the reality is that babies live outside of a hospital at 20 weeks' gestation all the time — inside of a mother's womb. Her statement is understandable — admitting to life at 20 weeks' gestation would practically require Sen. Landrieu to cosponsor the 20-week abortion ban bill languishing in the Senate, and that would go against the goals of her party.

Alas, Landrieu's inconsistent statements on abortion are hardly unusual in American politics. Perhaps that's why she thinks she can get away with them.