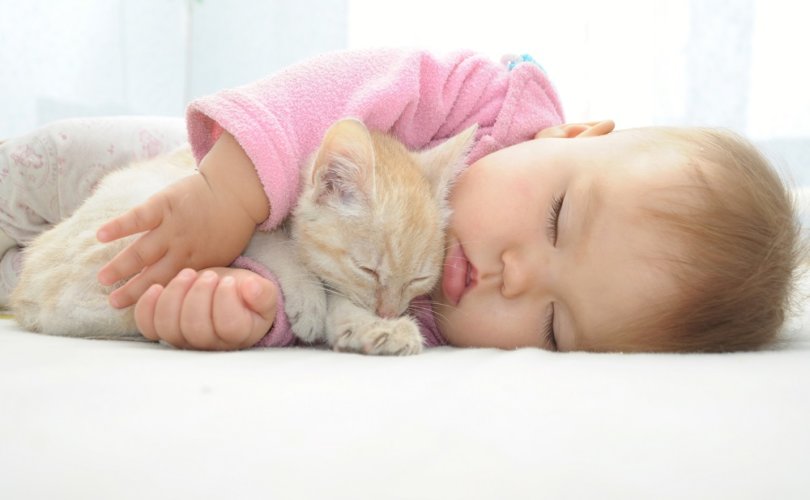 March 14, 2019 (Family Research Council) — What do cats have that newborn babies don't? Democrats' support. In one of the sickest ironies no one is talking about, Senate liberals picked this moment — 17 days after they voted to kill America's perfectly healthy infants — to fight for the humane treatment of kittens. Maybe the DNC's strategists are out to lunch, or maybe the Left really is this shameless, but I can't wait to see some of these politicians standing on debate platforms next year telling the American people that when it comes to protecting living things: We chose cats over kids.

For sponsors like Senator Jeff Merkley (D-Ore.), the optics are nauseating. Here he is, arguing that America “must stop killing kittens,” when, three weeks ago, he stood in the U.S. Capitol and agreed with 43 Democrats that human beings should be put down. “The USDA's decision to slaughter kittens after they are used in research is an archaic practice and horrific treatment, and we need to end it,” Merkley said with a passion that he and his colleagues couldn't muster for a generation of perfectly healthy newborns. His Kittens in Traumatic Testing Ends Now — or KITTEN — Act wouldn't stop the research, but it would keep the animals from being destroyed.

“The KITTEN Act will protect these innocent animals from being needlessly euthanized in government testing,” Merkley told reporters, “and make sure that they can be adopted by loving families instead.” Does he even hear himself? They should be treated and adopted? That's exactly what Americans have requested for living, breathing babies. Democrats said no. Killing a child is a “personal decision,” they said, and Congress shouldn't get in the way. What a comfort for abortion survivors like Melissa Ohden to know that, given the choice, Democrats would save a stray cat over her.

“The fact that we need a piece of legislation to tell the federal government to stop killing kittens is ridiculous on its face,” Congressman Brian Mast (R-Fla.) argued. But “ridiculous” doesn't begin to describe a party that tells America to back away from the tables of crying newborns while it rushes to the rescue of kittens instead. I suppose we should also tell firefighters when they run into burning houses to look for the pets first? After all, on the Democrats' sliding scale of “wantedness,” shouldn't we find out how loved someone is before we decide if they're worth saving?

Meanwhile, as if legal infanticide isn't revolting enough, House Democrats have decided Americans should pay for it. In what's turning out to be a test for the most unpopular majority in history, Speaker Nancy Pelosi's (D-Calif.) chamber is pushing a bill that would force a country who overwhelmingly opposes late-term abortion to bankroll it — along with abortions in any trimester. Rep. Diana DeGette (D-Colo.), another liberal who can't seem to take taxpayers' “No!” for an answer, is trying to overturn the Hyde amendment. “It's just important as we move forward that we pass legislation that honors women's reproductive health and their decisions,” she said.

But what about honoring taxpayers — two-thirds of whom fiercely oppose the idea of financing the Left's killing machine? And that includes “pro-choicers.” Although the bill doesn't stand a chance in the Senate, it could still make history. If Pelosi keeps up with the Left's tone-deafness and brings DeGette's bill up for the vote, it would be the first time the House has voted to overturn Hyde in history.

While House and Senate Democrats seem obsessed with taking lives, at least one court is helping states protect them. In what may turn out to be the ruling that turned the Supreme Court tide, the Sixth Circuit Court sided with Ohio in defunding Planned Parenthood. For three years, the Buckeyes have been fighting to redirect the $1.5 million for abortion providers to real health clinics. Buckeye leaders, including former Governor John Kasich, were sick of “using abortion providers as the face of state health care programs.” A lower court said too bad. But 11 judges on the Sixth Circuit disagreed, insisting that Ohio's law doesn't violate the Constitution “because the affiliates do not have a due process right to perform abortions.”

And while President Trump didn't have anything to do with the ruling, he had plenty to do with the people who made it. Four of the 11 judges who defended Ohio's law were appointed by this White House. If you're wondering how much this administration's commitment to nominations matters, this is proof. There are men and women on benches across America today who are literally saving lives because this president made the courts a priority. Thanks to Donald Trump, pro-lifers know better than anyone: you don't need Congress to win on life.