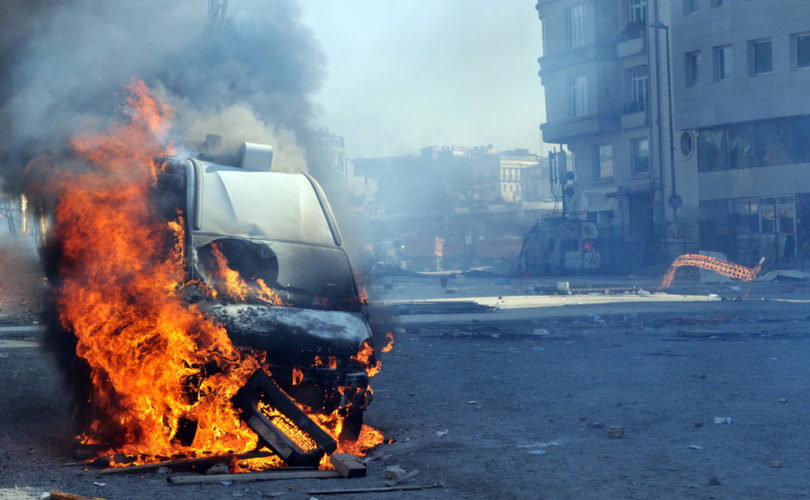 May 29, 2018 (American Thinker) – The Trump era has exposed the dark, vindictive, and oppressive side of liberalism, but that side has always existed. “Progressives,” as they prefer to be known, have a long history of extremism going back to Woodrow Wilson's Sedition Act of 1918 and FDR's many power-grabbing activities, including the 1937 attempt to pack the Supreme Court. Progressive thinking, because it attempts to impose an extreme vision of society on a public that resists its measures, is by its very nature authoritarian, antidemocratic, and elitist. Liberalism is not the “party of the people,” as it has long claimed to be: it is, rather, a despotic philosophy that because of its intention of imposing “advanced” thinking on the masses can govern only through deceit and force.

Because President Trump is reversing many Obama-era initiatives, the left's hostility toward him is unprecedented. Progressives are becoming increasingly rigid in their thinking – and increasingly aggressive toward any who disagree with them. The left's opinion of the president, echoed in every left-leaning corner of the media, is that he is illegitimate; incompetent; racist; sexist; and, in some vague and inchoate sense, “fascist.”

Because they view President Trump in these extreme terms, progressives view themselves not as violent extremists, but as “the resistance.” But resistance implies that there exists something worthy of resisting. The progressive resistance began just seconds after Trump was declared the victor on election night. The resistance was not engendered by anything Trump had actually done. It was just a refusal to accept any candidate who varied from the left's own line of thinking.

That sort of reaction, reminiscent of what happened with the election of George W. Bush, is a dangerous turn in American politics. It implies that the left refuses to accept any political action that does not accord with their own ideology. The left now demands the right to govern permanently and without opposition, regardless of the outcome of elections. This is evidence that the left today has lost respect for democratic institutions and that, if they were ever to find themselves firmly in control of government, leftists would not willingly relinquish power, even if voted out in a fair election.

The behavior of Obama partisans within the FBI and Justice Department, and of the Mueller probe that grew out of it, is precisely what one might expect of a radicalized opposition. It appears that under President Obama, high officials undertook to spy on the Trump campaign with the intent to throw the election to Hillary Clinton. In other words, the left sought to ensure that it retained control regardless of the will of the people. When Clinton lost, it appears that the left sought, through the unwarranted appointment of a special prosecutor, to discover grounds for impeachment. That probe is still underway, and it has employed unprecedented means such as the seizure of communication records between the president and his personal attorney. If it is willing to raid the office and home of one's personal attorney, place spies within an opponent's campaign, and file false documents in support of a FISA request, as alleged, how far is the left willing to go to retain power? It is not a large step from these actions to other, more forceful sorts of intimidation and outright election-rigging.

President Trump has responded to these attacks with admirable restraint. Wisely, he has refrained from firing Mueller or Rosenstein, despite apparent cause, even as he has seen one individual after another “retire” from FBI and Justice just as incriminating evidence was about to be revealed. Now the most serious revelations are about to come out.

As Gregg Jarrett reports, there is “strong circumstantial evidence” to suspect that high officials colluded to undermine the Trump campaign and the presidency, and that they employed criminal means to do so. If true, this amounts to nothing less than “an insidious plot unprecedented in American history” – one that would, if successful, have destroyed American democracy and replaced it with what would amount to the beginnings of a permanent leftist dictatorship.

No American, regardless of party preference, should fail to see the seriousness of these events. The Watergate break-in and the cover-up that followed made for a serious crime, but it was nothing compared to what is now alleged on the part of members of the Obama administration or on the part of Obama himself. Disclosures are at last moving forward, with House committees pressing for FBI and Justice documents and Sen. Grassley, chairman of the Senate Judiciary Committee, requesting communications among Bruce Ohr, Christopher Steele, and others relating to the anti-Trump dossier.

If it is true that President Obama ordered Attorney General Lynch and Director Comey to avoid bringing charges against candidate Clinton and to spy on the Trump campaign with the intention of throwing the election to Clinton, and if high officials at the FBI knowingly requested a FISA warrant on the basis of evidence known to be false, these actions will represent the most serious political crimes in the history of the country.

The present-day atmosphere of political division does not excuse criminal behavior on the part of members of either party. Yet the Democratic Party has been radicalized to the extent that illegal behavior now seems to be an everyday reality. Hopefully, leaders within that party will realize the dangerous ground they are on and pull back before further crimes take place. If not, America will suffer even more division – in effect, a political civil war – with great damage to our republic.

As the extent of criminal activities of progressives within the FBI and Justice Department becomes known, the American people must understand the seriousness of what has taken place. It's possible that the result will be a massive “red wave” in the fall elections with the Democratic Party marginalized for years to come, or until it returns to civil political discourse. That would be a positive outcome and a just one, considering the seriousness of the alleged crimes.

It's also possible, and more likely, that progressives will dismiss the seriousness of whatever crimes have been committed and engage in even more desperate measures. If that happens, only the political will of the American people will stand in their way.