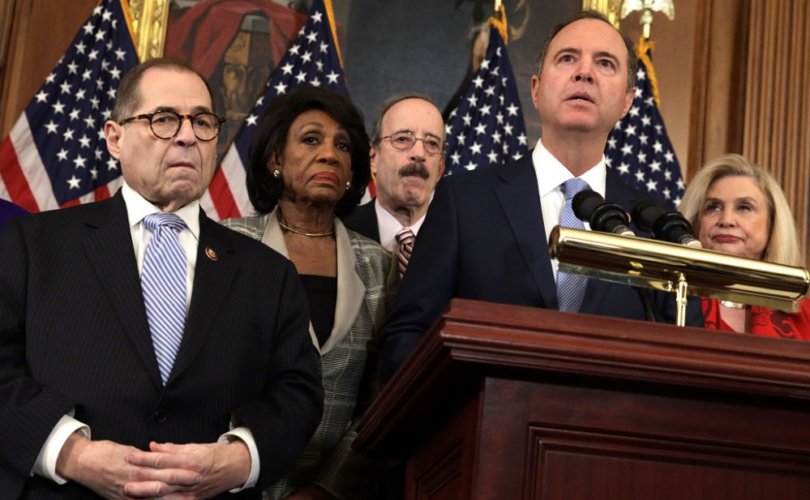 December 10, 2019 (American Thinker) — The Democrats' obsession with impeaching President Trump by hook or by crook has devolved into a burlesque. It is as absurd as it is deadly serious.

We are watching the deterioration of the Democrat party as it tosses aside the Constitution and all rules of fairness and decency. Adam Schiff appears to believe he is a monarch who has the power to destroy any person who ruffles his feathers. He began constructing this Ukraine nonsense the minute the Mueller Report failed to find Trump guilty of the Russia hoax.

He is likely close to Eric Ciaramella, who likely agreed to play the role of whistleblower when in fact he is just another anti-Trump member of the coup cabal. Thanks to a stealthy change of regulations, no longer was first-hand knowledge of a “crime” required to be a whistleblower.

Schiff held hearings in secret and prevented the Republicans from calling their own witnesses. He refused to release transcripts of any witness who undermined his narrative that Trump is guilty of something, anything. During the public hearings his committee held, he refused to let witnesses answer certain questions.

In short, the entire enterprise has been corrupt. That the Democrats let Schiff, Nadler, and Pelosi abuse their power so egregiously is the crime. No one but their die-hard Trump-hating base to whom they owe fealty will take them seriously for years and years.

The pundits who claim special knowledge say Pelosi is a shrewd strategist! She may have been once upon a time, but now she is caving to the worst instincts of her deranged base. Like Joe Biden, she seems to be failing mentally and physically. With this impeachment claptrap that she, Schiff, and Nadler are foisting upon the public, they are destroying their party.

All the participants in this nightmare must all have their fingers in their ears, so impervious to bad news are they. Chuck Todd's voice squeaked into the stratosphere on Meet the Press, so hysterical was he when Ted Cruz said that yes, Ukraine did interfere in the 2016 election to damage Trump and help Hillary Clinton. How can Todd not know this? Politico wrote about it in 2017. Marie Yovanovich admitted as much in her testimony (during which she lied about other things). Todd has apparently not read a word of the numerous books or the hundreds of articles by actual investigative journalists who have been on top of this attempted coup for nearly three years.

How is it that a news anchor on a major network knows so little about the treasonous activities of John Brennan, James Clapper, James Comey, or Andrew McCabe? Is it possible that, like the Trump-deranged Left among our citizenry, they simply refuse to read or hear a word that does not support their set-in-stone narrative that the Clinton-conceived Russia collusion lie was not a hoax?

They have invested every fiber of their beings in it so deeply that they cannot let it go, no matter how much evidence there is that it was Hillary and her co-conspirators who colluded with Russia. She paid for the Steele dossier that was the only basis for the FISA warrants and the Mueller investigation, as the I.G. report released on Monday asserted. The perpetrators of this coup all knew the dossier was nonsense but lied to the FISA court, over and over again, in order to spy on the Trump campaign. They all abused the power of their un-elected, taxpayer funded offices.

That the Russia hoax was invented by Hillary and her fellow money-laundering collaborators in the FBI, DOJ, and CIA is a well researched, undisputed fact, and yet to watch Schiff's or Nadler's little show trials, in which a witness can also be an interrogator, because they are sufficiently anti-Trump, one has to marvel at their willful blindness. So convinced are they that the public is as mind-numbed as they are that they continue on their completely phony drive to impeach the president, who they know is guilty of nothing but winning the election.

CNN, MSNBC, ABC, NBC, and CBS dutifully attempt to prevent any truths from seeping out to their viewers. They cut away from the hearings on Monday, when the video of Joe Biden bragging about his quid pro quo to Ukraine was aired. God forbid their audience learn a thing or two about what really went down.

The left media apparently still think we have no other sources for our news. One would think CNN might be wondering why it has barely half a million viewers. No American who cares about the truth is paying attention to the left media. Five minutes after the I.G. report was released, they were all announcing that the FBI was exonerated, that its FISA warrants were justified. That is not what the report says at all. But of course, they had not yet read it. They are still convinced that we will buy their lies. They can't give up on their conviction that we are all really, stupidly gullible. That is how seriously in denial about the American people our America-hating Left is. These people's contempt for the Constitution and for President Trump is all we need to grasp the depth of their contempt for us.

No matter how much leftists try to spin the I.G. report as some kind of exoneration, as they did all day long on Monday, they will fail to convince those outside their knowledge bubble. No matter how much Schiff, Pelosi and Nadler try to convince the public that Trump committed a crime on a phone conversation, the public knows better. The people are getting to see the Left's unscrupulousness live on TV thanks to Schiff, Pelosi, and Nadler, and they are an ugly, specious band of hired guns.

President Trump was elected to drain the swamp. What we have seen these past few weeks is these vicious swamp-dwellers being exposed to the light of day, but they still think they are in charge. Their parade of pompous lefty lawyers, hubristic members of the diplomatic corps, and radical academics has done the rest of us a great service. These are the people who truly believe they are so superior to the rest of us that they must be entitled to govern us, to tell us what to think, what to eat, drive, see, read, and exactly what form our indoctrination should be and how it will be administered. We are nothing to them but subjects, an annoying fact of their posh lives.

Can anyone name a Democrat who does not mean to control every aspect of our lives? Not Bloomberg, not Warren, not Bernie Sanders, not Ocasio-Cortez and her squad. They are all control freaks opposed to individual liberty. And they think we don't know this about them. They are seriously in denial.

Americans want no part of the socialism Bernie promotes, or the fascism heralded by Warren, Bloomberg, et al. And Biden? Well, he's just over and done. They are all in denial about how Americans think about their country and how much they love it as founded. “We can either walk the high road of brotherhood or the low road of man's inhumanity to man” (MLK).

Pelosi, Schiff, Nadler, and all the Democrats who are too afraid to yell Stop! are on the lowest of roads, in denial of the damage they are doing to their party and their country.