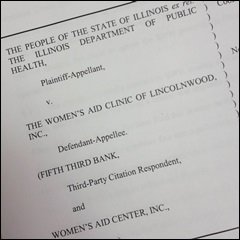 Earlier this year, the Pro-Life Action League reported that the Forest View abortion facility, located in the Chicago suburb of Des Plaines, had closed. But the owners of the building, Vinod and Vijay Goyal, have recently opened another facility—Apollo Surgical Center—in the location that formerly housed Forest View.

Apollo bills itself as specializing in gastroenterology, urology, pain management—and, of course, gynecology.

Why the move to diversify away from all abortions, all the time? It seems that the motive is increased profit during times when the clinic lies unused. When Forest View was open, it was only used two days per week. By renting out the space in the clinic on non-abortion days, there is an increase in profits, and the veneer of respectability.

Clearly, utilizing this clinic for legitimate surgery only increases profits for the Goyal empire and subsidizes their abortion business. (The Goyals own more abortion clinics—five—than anyone else in Illinois.)

So, how is this diversification working out? Recently, a pro-life volunteer asked that question of some of the employees who were standing outside on a smoke break. Shrugging their shoulders, they gave the impression that not much was happening.

Asked if they were doing abortions, they quickly denied it, saying, “Not us!”

One hopes that as the reality of where they are working sets in, these other physicians will decide to offer their legitimate services elsewhere.

Another Goyal-owned facility, Advantage Health Care, located in the Chicago suburb of Wood Dale, seems to be taking the same route.

All of the above are usually performed by a gastroenterologist.

All of these are usually performed by an ophthalmologist.

Addtionally, Advantage lists the following among its newly “approved procedures”:

These are all usually performed by and orthopedist.

These are normally done by an ENT (ear, nose, and throat) physician.

With all these new procedures, you might expect to find that the list of specialty physicians would match up.

But you would be wrong.

Added to the previous year’s list of physicians/abortionists were three (3) new physicians.

The first is James Threatte, an experienced OB/GYN who, according to his physician profile with the Illinois Department of Professional and Financial Regulation, is not currently certified in his specialty.

The second is Vanessa Villacorta-Sierra, a rather young and inexperienced physician who finished her Family Practice residency in 2010 and a fellowship in OB and Pediatrics in 2011.

The third physician will be dealt with in a future article. He has recently received his Illinois license back, on probation, after a 10-year revocation related to a multi-million dollar Medicaid fraud conviction. But to the point of specialties, he is an anesthesiologist.

So who is to perform all these newly added procedures? These three possibilities exist:

This certainly wouldn’t be the first time that #3 has been tried. (For but one example, the Albany Medical/Surgical Center abortion facility, located just a mile from the Pro-Life Action League’s office on Chicago’s Northwest Side, at one time called itself “Albany Foot and Ankle Clinic” but continued to be a regular abortion clinic.)

So perhaps diversification is just another smokescreen to hide the fact that abortionists generally work alone because no one really wants to work with them.