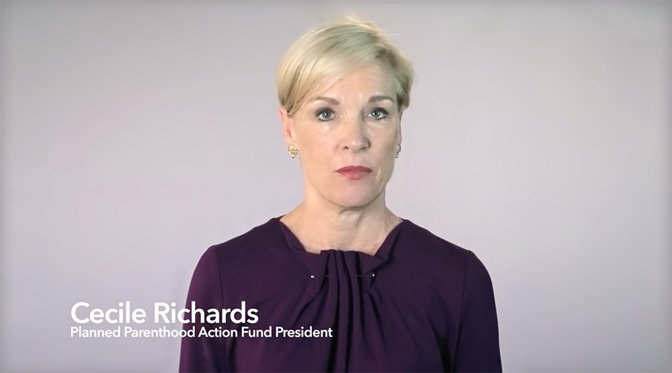 May 4, 2017 (LiveActionNews) — Planned Parenthood claims to provide a number of health services…but what they don’t tell the public is that these services have been decreasing significantly for years, despite the fact that over several years, Congress has nearly doubled the abortion giant’s taxpayer funding. As Congress is considering defunding Planned Parenthood’s half a billion dollars annually, Live Action has highlighted a select number of these declining services in a newly released video, which focuses on services reported from a ten-year period (2004 to 2014), as well as on Planned Parenthood’s website and official spokespersons’ statements:

The data speaks for itself and paints a clear picture of how undeserving Planned Parenthood is of those dollars. While politicians and abortion advocates tout a variety of Planned Parenthood’s health services in an attempt to justify federal funding for the organization, many of those same services are drastically declining.

So what isn’t declining at Planned Parenthood? Two things: abortion and taxpayer funding.

The following report includes links to documentation where the information originated. While Planned Parenthood may have adjusted service totals for a specific year in a later report, the statistics used here and in the video are from the most current reports available. While the Live Action video focuses on cancer screening services, this article includes additional statistics on declining services.

In 2011, Planned Parenthood’s president, Cecile Richards, boasted of the organization’s three million patients. Now, as of early 2017, that amount is half a million less.

One can only speculate why Planned Parenthood’s patient numbers are falling, but investigative footage by Live Action (as well as the Center for Medical Progress) exposing distasteful and potentially illegal activities by the abortion giant could hold a clue.

In addition to patients, facility numbers are also taking a hit.

Although Planned Parenthood once operated 900 facilities, today, the abortion profiteer states on its website that it operates “nearly 650 health centers throughout the United States.”

Why is Congress giving hundreds of millions of tax dollars to an organization whose numbers are falling year to year? The truth is that there are more worthy health care providers — Federally Qualified Health Centers and community health centers — and they outnumber Planned Parenthood facilities by the thousands. In fact, while Planned Parenthood patients declined nearly 17 percent from 2011 (3 million) to only 2.5 million patients today, federally funded health centers, as identified by the federal Health Resources and Services Administration, served more than 24 million patients in 2015 alone.

Some claim that if Planned Parenthood is defunded, these health centers could not handle the patient influx; however, The Radiance Foundation founder Ryan Bomberger correctly pointed out that in just two years, federally funded health centers increased their patient load by over 2 million.

Another area of embarrassing decline for the organization — which claims to be one of the “nation’s leading providers of high-quality, affordable health care for women, men, and young people” — is breast exam services.

As Live Action has previously documented, Planned Parenthood CEO Cecile Richards admitted before Congress that her organization performs no mammograms at all. HRSA health centers, on the other hand, recorded serving more than 470,000 patients for mammograms in 2014, and 521,000 in 2015.

But what about Pap smears, which test for cervical cancer? Those are also on the decline at Planned Parenthood.

In contrast, federal health centers provided more than 1.7 million Pap tests to their patients in2014, and more than 1.8 million in 2015.

Then, by 2014, despite adding HPV vaccinations to this category, cancer screenings declined to only 682,208.

The abortion giant has insisted that prenatal care is one of its core services that women will lose if its taxpayer funding is cut off. But an investigation conducted by Live Action proves those services are virtually nonexistent at the abortion chain.

This is in stark contrast to what Planned Parenthood used to say about prenatal services. As Live Action News previously reported, at one time (see 1996-1997 annual report), prenatal care appeared to be Planned Parenthood’s “fastest growing area.”

This is no longer the case, nor has it been for quite some time. The truth is that abortion has always been Planned Parenthood’s focus, which might explain why this once “fastest growing service” dropped nearly 44 percent between 2010 (31,098) and 2014 (17,419).

While services such as Pap tests, breast exams and cancer screenings are plummeting at Planned Parenthood, surprisingly (or perhaps not so surprisingly) abortions have been on the increase.

The latest Planned Parenthood report shows that the organization committed 323,999 abortions, a significant increase of 27 percent from 2004 numbers.

If Congress wants to hand over half a billion in taxpayer dollars, shouldn’t the American people expect their money to go someplace better than an abortion-focused, less-than-trustworthy organization?

After all, Planned Parenthood has been caught haggling over prices for aborted baby parts, has been cited for overbilling abuses and Medicaid fraud, violating patient privacy, and failing to report child sexual abuse (a violation that alone should result in the organization losing millions of taxpayer dollars granted to it under the federal Title X Family Planning Program).

In summary, while the Live Action video focused primarily on cancer screening services over the past ten years, using statements by Planned Parenthood spokespersons to demonstrate how they deceptively tout declining service numbers, additional declines outlined here add to the overwhelming argument that Planned Parenthood is undeserving of taxpayer funding.

It is past time for Congress to admit the undeniable fact that, despite doubling taxpayer dollars to Planned Parenthood over a decade ($272.7 million in 2004 to $553.7 million in 2014), these declining health services prove that their focus is not health care; it is abortion. And this organization tragically commits one abortion every 97 seconds.