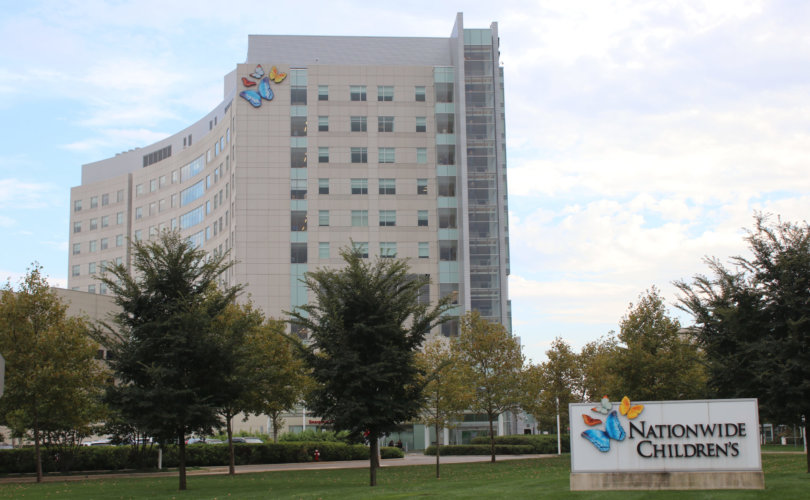 That same hospital operates a very profitable “gender clinic” for minors to push them toward medical mutilation in the vain hope of becoming the opposite sex.

Promoting “gender change” is a big part of the chosen curriculum — “Get Real,” a Planned Parenthood-developed comprehensive sex education tool that is not abstinence-focused but just the opposite.

And that is a violation of Ohio’s existing abstinence-until-marriage sex education law.

The $2.5 million grant, announced in September, is funding three years of alleged “teen pregnancy prevention” for seventh- and eighth-graders through the U.S. Department of Health and Human Services in 12 Columbus-area middle schools.

And the Columbus superintendent emphasized that such a program is especially important for “black girls” right now because of “health disparities.”

So, wait — it’s now going to be more important for minority adolescent girls to be corrupted early, to be encouraged to begin sexual activity, to block parental knowledge and possibly have an abortion? That seems like the opposite of sound health, but actually would make eugenicist and hard-core racist Margaret Sanger, founder of Planned Parenthood, proud.

And in Columbus schools, this is just one tool of life-destroying intervention in the lives of 12-year-olds. There are already school-based health clinics throughout the district, enabling contraception and referrals for abortion. This program plans to add another one.

In other words, these are school health centers that students can access during the school day to bypass parental oversight.

Ohio has a law (Ohio Revised Code 3313.6011) that school sex education shall emphasize abstinence until marriage as the “expected standard.” Even a cursory look at “Get Real,” as well as learning its close ties with Planned Parenthood, reveals that abstinence will not be the principal takeaway from its lessons.

The Protect Child Health Coalition has done a complete analysis of “Get Real.” For instance, in seventh grade, the “Get Real” teacher’s manual encourages a class discussion of sexual terms and welcomes student questions in an open forum, a common but exploitative way to destroy innocence and normalize sex practices of all types. Seventh graders will also be taught that there is no right age to have sex, that the only requirement is “consent,” and that people of apparently any age have a right to decide their own sexual boundaries.

There can be no question this curriculum fails to emphasize abstinence, but just the opposite. What it does emphasize is approved initiation of high-risk, deviant sexual conduct and the sudden termination of childhood dreams and ideals.

A lot of time in “Get Real” is spent selling acceptance of homosexuality and gender confusion. The manual instructs teachers to “discuss LGBTQ issues respectfully” and implies inaccurately that homosexuality is inborn: “Homosexuality exists in almost every species. Fact. Scientists have found that homosexuality is as much a part of nature as heterosexuality. They have observed homosexual relationships among many kinds of animals.”

Animals also kill for sport. Are we humans to take that as a cue for worthy human behavior?

One homosexually-identifying boy gives a “testimony” where he hopes for the acceptance of “children who are gay.”

Yes, abstinence is mentioned, because students must apparently be given a new concept of abstinence, that it’s “up to each person” (at age 12 and 13) to define what they believe is “abstinence,” including any act short of vaginal intercourse. And that may qualify if “protection” is used and one is successful in preventing pregnancy or sexually transmitted infections. The clear implication is left that abortion can also be the solution at times as well. A Planned Parenthood affiliate developed the curriculum, so of course abortion will not be criticized in “Get Real.”

Gender “change” is pushed as totally normal. Yet surveys have indicated that most voters oppose this medically-unnecessary child disfigurement and an Ohio bill was introduced in November to prevent such abusive gender treatments of minor children.

“Get Real” also presents elements that are sure to divide children and parents by asking adolescents to reflect on the “pros and cons” of what parents and other influences have taught them.

The mother lode of harmful material is what kids learn at the end. They are urged to consult a variety of anti-family, pro-abortion resources like, of course, Planned Parenthood. Should any minor children be taught to trust Planned Parenthood, with clinics that would have gladly put them to death in utero had their mothers dropped in? Seventh graders are also referred to the anti-child Human Rights Campaign, the leading homosexual/“transgender” group in the nation, whose platform and activities viciously oppose faithful Christian values.

So if you would like to respectfully express your opinion to the Columbus City Schools superintendent Dr. Talisa Dixon, her phone number is 614-365-5000.