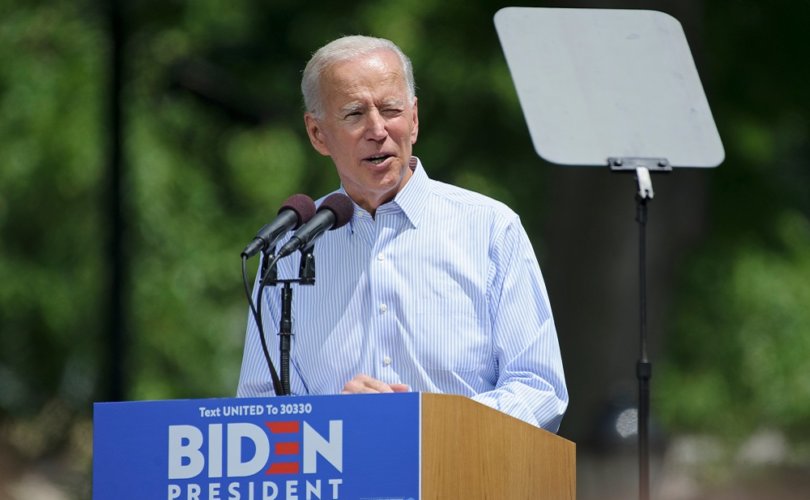 September 6, 2019 (American Thinker) — On April 25, 2019, Joe Biden declared his candidacy for the Democratic presidential nomination. Seven days later, on May 3, 2019, the Chinese sent a diplomatic cable to the Trump administration blowing up a 150-page draft agreement that had taken many months to negotiate. The cable was riddled with reversals by China that undermined core U.S. demands. In each of the seven chapters of the trade deal, China had deleted its commitments to change laws to resolve core complaints that caused the United States to launch a trade war: theft of intellectual property and trade secrets, forced technology transfers, competition policy, access to financial services, and currency manipulation.

A coincidence or a premeditated scenario?

Joe Biden, in his days in the Senate, was very partial to China, as he voted against revoking China's “most favored nation” status and in 2007 opposed the idea of applying any tariffs to China despite its obvious unfair trade practices. It was as vice president that he became wholly enamored of the country and its leadership.

For example, while in China, Biden, in August of 2011, defended and approved of China's one-child policy, which brutally used forced abortions to implement the law. In the same year, Biden was given the assignment, by Barack Obama, to be the point man on China due to his close personal relationship with Xi Jinping, then vice president and heir apparent to the presidency. (Xi Jinping is currently president and general secretary of the Chinese Communist Party, the most powerful figure in China's political system.)

Due solely to Joe Biden's influence, in 2011, less than a year after starting Rosemont Seneca Partners, essentially a three-man investment firm with Chris Heinz (stepson of John Kerry), Biden's son Hunter, who had no previous experience in private equity, was in China to explore business opportunities with Chinese state-owned enterprises. These meetings occurred just hours before Joe Biden met with the Chinese president in Washington. Later in the same year, Hunter had a second meeting with many of the same Chinese financial powerhouses — just two weeks after his father, the vice president, conducted U.S.-China strategic talks in Washington with Chinese officials.

Meanwhile, Joe Biden never missed an opportunity to downplay China's threat to the United States. In May of 2013, during a commencement speech, he assured those concerned THAT the Chinese were “going to eat our lunch” that they had nothing to be alarmed about, as China had immense problems and an inability to think differently. In May of 2014, Biden described China as a nation incapable of producing innovative products and ideas. (Two weeks after declaring his 2020 candidacy, Biden, in Iowa, said, “China is going to eat our lunch? Come on, man…they can't even figure out how to deal with the corruption that exists within the system. I mean, you know, they're not bad folks, folks. But guess what: they're not competition for us.” After a massive backlash, he walked back some of those comments a few days later by saying, “I don't suggest China is not a problem.”)

In December 2013, Biden flew to Beijing on Air Force Two with his son Hunter on an official trip, ostensibly to discuss tensions over disputed territories in the East China Sea. Joe and Hunter were ushered into a red-carpet meeting with a delegation of various Chinese officials. Hunter remained with the delegation while his father met with President Xi Jinping. During these meetings, Joe Biden struck an extremely conciliatory and friendly tone with the Chinese leadership — much to the dismay of America's allies in the region.

Ten day later, Hunter's company, Rosemont Seneca, signed an exclusive $1-billion (later expanded to $1.5-billion) deal with the state-owned Bank of China, creating an investment fund called Bohai Harvest, with money guaranteed by the Chinese government. As Peter Schweizer, who was the first to unveil these conflicts of interest, wrote in his book Secret Empires, “the Chinese Government was literally funding a business that it co-owned along with the sons of two of America's most powerful decision makers.” Rarely has there been a more stark illustration of being “compromised by a foreign power.”

And in 2014, another arm of Hunter's budding business empire, Rosemont Realty, began negotiating multi-billion-dollar deals with Gemini Investments, a Chinese firm with ties to the China Ocean Shipping Company Ltd., which reportedly operates as an extension of the Chinese military and who eventually acquired 75% of Rosemont Realty in order to purchase commercial real estate in the United States.

Anyone who has dealt with the Chinese government or the myriad of entities controlled by the government can attest: any foreign business transaction with China always has a requisite or implied quid pro quo that oftentimes does not involve monetary considerations. Once entangled in this web, it is nearly impossible to escape. It would be naïve to believe that the Biden family, particularly Joe, are not embroiled in this labyrinth of expectations and demands.

In the years and months before he decided to throw his hat in the ring, it had to be obvious to Joe Biden and in particular those close to him that his mental acuity is rapidly failing, not to mention that his and Hunter's questionable business activities in China and Ukraine would be exposed on a grand scale. Why, then, would he willingly take on a grueling 18-month marathon of running for president? As the timing of Biden's announcement and the Chinese abrupt volte face on the trade agreement implies, one must assume he was coerced into declaring his candidacy as a pawn in the chess game the Chinese are playing in order to defeat Donald Trump in 2020.

If Xi Jinping coerced his old friend Joe Biden into running, then he placed his prestige and fate on the line that China would be able to hold out in the ongoing trade war and achieve a favorable outcome in any negotiations with Biden at the helm. While Xi Jinping is powerful, he still is one of seven members of a standing committee of the Politburo (25 members) who can oust him. At this point, Xi Jinping cannot be perceived as losing face by caving to Donald Trump and reinstituting the agreement made in the spring of 2019.

Therefore, while the threat of further escalation in the trade war will recede, there is little chance of anything substantive happening, as intransigence will be the rule the day between now and November 2020. However, China's growing internal problems and failing economy will dramatically escalate, which could force the Politburo to either remove Xi Jinping or accept, with clinched teeth and a renewed determination to defeat Donald Trump, the basic terms of the May 2019 trade agreement.

Joe Biden's everyday performance on the campaign trail reinforces the reality that he will not be the Democratic Party presidential nominee. Thus, whoever is nominated by the Democratic Party will, by default, be backed by the Chinese — who will do whatever is legal, illegal, or unethical to defeat Donald Trump. The actions the Russians were falsely accused of in the 2016 election will be child's play by comparison.

It appears that the Chinese may have made a major blunder in April and May of 2019 — a blunder with potential major ramifications for China and, if Donald Trump is defeated in 2020, the United States.