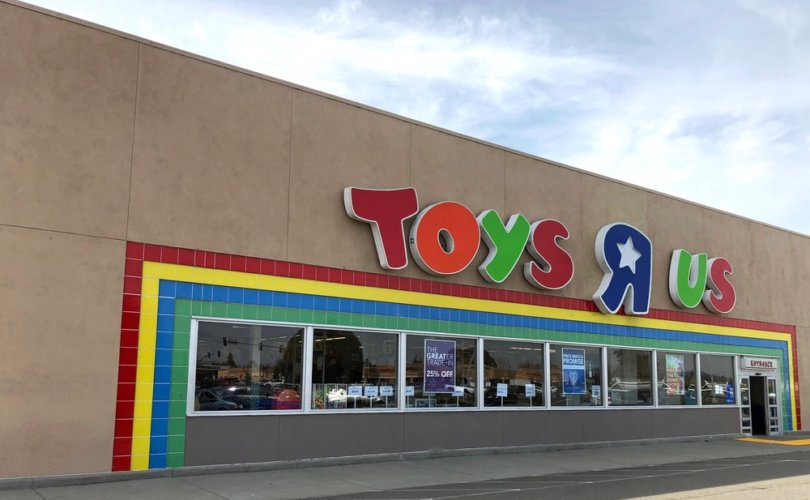 March 19, 2018 (LifeSiteNews) – The decline of birth rates in the United States and around the world has been cited as one of the factors behind the collapse of retail giant Toys R Us, but the company’s own contribution to that decline, particularly by donating money to Planned Parenthood, has gone largely overlooked.

For years, many have expressed concerns over the cultural and economic implications of women in western countries either putting off parenthood or rejecting it entirely. In 2016, the American fertility rate dropped to a record low of 62 births per 1,000 women aged 15 to 44, according to the Centers for Disease Control and Prevention.

Toys R Us announced last week that it will close its 735 American stores, following its filing for bankruptcy last fall. Business Insider notes that in its annual 2017 filing with the U.S. Securities and Exchange Commission, the company cited declining birth rates as one of the reasons it failed to remain sufficiently profitable.

“Most of our end-customers are newborns and children and, as a result, our revenues are dependent on the birth rates in countries where we operate,” the document explains. “A continued and significant decline in the number of newborns and children in these countries could have a material adverse effect on our operating results.”

However, Toys R Us was also one of many American companies that donated to Planned Parenthood, America’s most prolific committer of abortions.

In August 2010, Life Decisions International (LDI) identified Toys R Us as a boycott target for its contributions to the abortion giant. In December of that year, LDI removed Toys R Us and several other companies from the list, a development it credited to pro-life activists who pressured the companies to reverse course.

According to LDI, a company can get itself removed from the list by either ceasing Planned Parenthood donations for at least five years, or pledging to disqualify the abortion giant from future contributions.

2ndVote, an organization that monitors corporate giving from a conservative perspective, reports that as of February 2017, the Susan G. Komen Foundation’s Greater New York City and Minnesota affiliates listed Toys R Us as among the companies that match employee contributions.

As LifeSiteNews has previously covered, the Komen breast cancer charity was the subject of a 2012 controversy in which it attempted to cut ties with Planned Parenthood, but then backed down in the face of pressure from the abortion giant.

According to its most recent annual report, Planned Parenthood received $543.7 million in taxpayer funding and $532.7 in private contributions.

Its revenue allegedly earmarked for non-abortion purposes ultimately helps free funds from its other sources to be spent on abortions. The Susan B. Anthony List notes that the $326,400,000 rise in Planned Parenthood’s federal funding from 2000 to 2013 “resulted in a 66 percent increase in the number of abortions and a 61 percent decrease in the number of adoption referrals.”

Planned Parenthood commits roughly a third of America’s estimated annual abortion rate. More than 60 million preborn babies have been aborted since Roe v. Wade. Pro-life political consultant Mark Olson estimated in 2012 that when one factors in the children and grandchildren those aborted babies would have grown up to have, America’s true population loss due to abortion is at least 117 million, or roughly a third of the U.S. population – and a considerable number of lost Toys R Us customers.