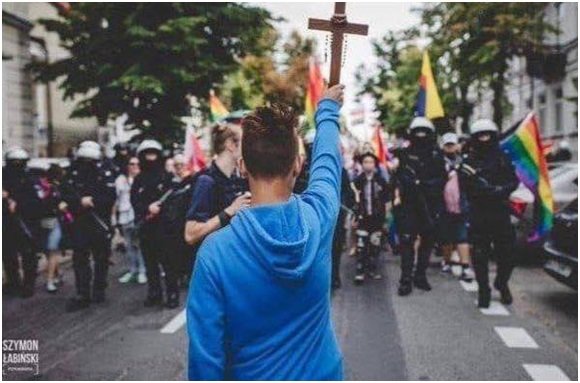 NAPLES, Florida (LifeSiteNews) —The Widow’s Mite is one of those Gospel stories with a deeper meaning we tend to miss.

As told in the twelfth chapter of Mark, Jesus draws the attention of his disciples to a poor widow who’s just given all the money she has (which isn’t much) as a gift to the Temple. Our Lord notes the relative value which her two small coins had to her, compared with the much larger gifts offered by worshippers with far greater personal wealth.

The point we usually take from this tale is how generous the widow is. That’s true, of course, and certainly to her credit. But the real lesson — one which we should contemplate more fully — is that her generosity is a reflection of her trust in God.

This is one courageous lady. By giving away the contents of her purse, meager as it might be, she is truly stepping out on faith, trusting that God will provide.

Courage is a gift of the Holy Spirit. It’s the ability to live in trust that our lives are in God’s hands. It’s the confidence that, whether we face good or ill, we are safe in His love.

God-inspired courage is becoming an increasingly relevant personal asset. The changes that have taken place in our country during the pandemic make it imperative that we be prepared to act on that confidence when conditions demand.

What we’ve always assumed to be basic rights have been seriously eroded. The issue of vaccine mandates is only the most visible area in which the assault on personal autonomy is taking place. At any time we could be called upon to defend ourselves, our families, or our beliefs.

Challenges can come from unexpected sources and under the most mundane circumstances. One situation laid before me just last week illustrates.

A man I know who holds an executive position with an insurance firm received instructions from his management about client relations. The company memo listed certain restaurants at which clients could be entertained. All the eateries included had been recognized specifically as LGBT-friendly.

That any company would insist on such a qualification seems almost laughable. What exactly makes a restaurant LGBT-friendly? Are the steaks on the menu from gender-fluid cattle?

But silly as the requirement might be, the man shared with me that it put him in something of a dilemma.

In our socially-networked age, when your every move is observed and can be posted online, did he wish people to question why he would frequent restaurants known as LGBT-friendly? More importantly, what right did his employer have to insist he patronize establishments that make it a point to publicly endorse sexual identities and behaviors to which he objects?

This was a serious intrusion upon his personal reputation and sense of morality.

How he resolves his problem remains to be seen. But it was worrisome to him that he might be facing a situation that will require the courage to take a serious stand (and possibly make a major life change).

There’s good reason for him to worry. Stories of people having to walk away from seemingly secure jobs are becoming all too common.

The Church faces similar pressures as an institution. Having to suspend Masses, limit attendance, cancel parish events, and all the other intrusions we’ve endured over the last 19 months bring into sharp focus the need for taking certain stands, for speaking out, for drawing moral lines.

One small recent incident got my dander up. Our local newspaper gave significant play to a national release about what some people probably consider an issue of great “progressive” importance: DC Comics has introduced a new story line that has the son of Clark Kent (AKA Superman) coming out as bisexual.

Displaying a rainbow banner with the declaration, “DC Pride,” the new comic book series has 17-year-old Jon Kent in a “relationship” with a young (male) reporter. The two have determined to carry on a fight for global social justice.

I realize that, by current pop-culture standards, a bisexual Superman is nothing special. Indeed, the idea is as stupid as requiring that insurance clients be entertained at LGBT-friendly restaurants.

But the moral assumption by which such a concept is given national publicity shows how far we’ve moved beyond Christian virtue. Besides that, it’s an assault on the children who will read about such tripe and then buy the comic books.

Will the Church raise objections? Will individual believers write in to their local news outlets that ran this story? Is there anything we feel compelled, as a community, to say about such harmful nonsense?

Would anything we say even matter these days?

Today we’re awash in stupid immorality. But we’re also confronted by serious challenges that diminish freedom, threaten livelihoods, and rob us of our human dignity.

Such a situation has befallen a Christian professor at Virginia’s Christopher Newport University, Sophia Nelson, who tweeted this simple question about the bisexual Superman: “What if Christian parents of children reading comic books don’t want their kids exposed to bisexual characters?” A petition circulated by students and protests from her faculty colleagues have put her job in jeopardy.

But she’s standing firm. This black scholar, who has now been called a “racist” because of her audacity in raising such a concern, told the Daily Signal:

“I’m going to fight for those founding principles that I believe in, and free thought, not free speech, but free thought is at the essence core of who we are. And I am not going to let this moment pass without me making sure that they know that they should never ever do this to anybody again and that I was the wrong one for them to do this to.”

Like Sophia Nelson, we must find the courage to trust in God — and in that trust to take what stands we’re called upon to take.

If we can’t do that, we’re failing in our discipleship. We’re phony Christians.

This essay is based on a homily delivered by Rev. Michael P. Orsi.  A priest of the Diocese of Camden, New Jersey, Father Orsi currently serves as parochial vicar at St. Agnes Parish in Naples, Florida. He is host of “Action for Life TV,” a weekly cable television series devoted to pro-life issues, and his writings appear in numerous publications and online journals. His TV show episodes can be viewed online here.