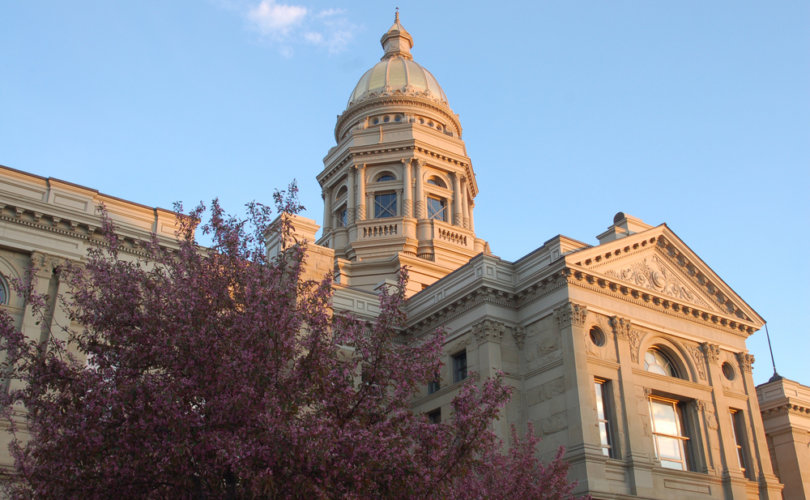 September 7, 2016 (ThePublicDiscourse) — On Wednesday, August 17, the Wyoming Supreme Court heard a case that has huge implications for each and every one of us.

The case involves Judge Ruth Neely, who has served with distinction for twenty-one years as the municipal judge in Pinedale, Wyoming. Since municipalities have no authority either to issue a license or solemnize a marriage, you would think that she’s unaffected by all the hoopla over same-sex marriage. But you would be mistaken. Because of her beliefs about marriage, the Wyoming Commission on Judicial Conduct and Ethics (CJCE) wants to remove her from her job and disqualify her for service anywhere in the Wyoming judiciary.

The story began on a cold Saturday morning in December 2014. Shortly after the Tenth Circuit Court of Appeals declared Wyoming marriage statutes unconstitutional, a reporter from the Sublette Examiner called Judge Neely to ask if she was “excited” to perform same-sex marriages. It was only because she had accepted a part-time job as a circuit court magistrate that this question had any relevance at all. In that unpaid position, she was authorized, but not obligated, to solemnize marriages. She gave a perfectly reasonable reply. She said that if she were ever asked, she would help the couple find someone to do the job. However, she would “not be able to do” it herself.

Based on this solitary exchange about a hypothetical scenario, the commission has been waging what they call a “holy war” against her for more than a year. They are not content to send her a letter clarifying what she should have done, nor even a letter of reprimand. Instead, they are leveling the greatest possible punishment allowable by law—and the implications of their arguments are chilling.

One central allegation against Judge Neely is the charge of bias. The commission claims that merely by publicly affirming biblical teaching on homosexual acts, she immediately and irrevocably rendered herself unfit to judge fairly or impartially in any matter whatsoever.

The commission makes much of a private letter in which she discussed a number of biblically named sins. The commission was so shocked that she would agree with the Bible that her church (Lutheran Church—Missouri Synod) was called “repugnant” in open court. Moreover, when the Alliance Defending Freedom asked to represent her, the commission filed additional charges against her for “affiliating with a discriminatory organization.”

Let’s think about this for a minute. Note, first, that the idea of “sin” is not a legal category. It is a theological category. Sins are committed against God. Crimes are committed against the state. For centuries Americans have accepted that something may be a sin without being a crime. Drunkenness, adultery, greed, and blasphemy immediately come to mind. This concept is at the heart of the distinction between church and state. For over two centuries, American judges have been applying the law equitably and fairly to people who engage in all kinds of sins without confusing sins with crimes. But now the CJCE wants Wyoming to believe that this particular sin can no longer be called “sin” without threatening the entire judicial system.

If this reasoning is true, then it should apply to every judge who thinks something is a sin that the government has declared legal. Do you believe that drunkenness is a sin? Well, since there’s no law against it, you’re fired! You think that adultery is a sin? You cannot be a judge anywhere in Wyoming. Who will be left to sit on the bench? Only those who have no moral compass beyond the letter of the law?

Is Only Private Speech Free?

A second major point that the commission makes is that Judge Neely, “by announcing her position against marriage equality,” openly spoke against the law of the land. Here is another curious position. Does the commission really mean to say that any public opposition to any law should immediately disqualify a judge from office? The commission might want to think that one through a bit more.

Prior to October 6, 2014, same-sex marriage was against the law in Wyoming. If the commission is right, every judge who spoke in favor of same-sex marriage prior to that date should have been immediately removed from the bench. This would be rather awkward, since Wendy Soto, executive director of the CJCE, was on the board of Wyoming Equality and agitating for same-sex marriage long before it was legal. Even leaving such awkwardness aside, the commission’s position has some rather staggering implications. Should we drive all pro-life judges from the bench because of Roe v. Wade? Should we remove all judges who speak in favor of gun control because of the Second Amendment? While NARAL might favor the first idea and the NRA the second, no person who understands the importance of free speech could seriously want either.

And this brings up a third point that we should consider carefully. The commission goes to great lengths to argue that Judge Neely’s remarks to Ned Donovan were a “public statement.” Presumably, she would not be in trouble if she had said the exact same words in private. Is the commission arguing that Judge Neely has the right to free speech—as long as not too many people hear it? If she had said these things in a Sunday school classroom, would she still be charged with judicial misconduct? What if she had said them in a restaurant while reporter Ned Donovan happened to be sitting in an adjacent booth? What if she had written these remarks down before same-sex marriage became legal and Mr. Donovan published them afterwards? Should she then be hauled before the commission and asked to publicly recant?

This may all seem farfetched, but it is not. In Atlanta, former Fire Chief Kelvin Cochrane was fired for a self-published booklet that he wrote for his men’s Bible study. Is Wyoming going to follow suit?

If all of this sounds like the abridgment of Judge Neely’s free speech, it is. But never fear. The commission confidently asserts that this is permissible under the United States Constitution because it applies only to judges. Judges are prohibited from speaking publicly about their most deeply held convictions, but no one else is. Of course some statements from judges really do call into question their impartiality—for that, see recent comments from Supreme Court Justice Ruth Bader Ginsburg—but as we saw above, Judge Neely’s comments do nothing to undermine her impartiality with respect to judging and enforcingthe law.

After a year and a half, this case finally came before the Wyoming Supreme Court on August 17. I traveled to Cheyenne to hear the oral arguments, and I was struck by the implications of what I heard.

Throughout the arguments, Pat Dixon, the counsel for the commission, strove to downplay constitutional questions. He told the justices, “I’m not a constitutional scholar,” and admitted that he had not actually read some of the cases cited in the Commission’s brief. Rather than the Constitution, the commission wanted to focus exclusively on the Code of Judicial Conduct. Judge Neely, by contrast, focused primarily on the US and Wyoming constitutions. So stark was this contrast, that Wyoming Supreme Court Justice Kate Fox prefaced one of her questions to the commission by saying: “I know you don’t want to talk about the Constitution, but we need to.”

Indeed, constitutional questions are at the heart of this case. In addition to the First Amendment’s protection of free speech, Article I of the Wyoming Constitution guarantees that “every person may freely speak, write and publish on all subjects.” Not only did the commission have to get around these prohibitions, it also had to deal with the religious dimension of the case. How can you sanction a judge for affirming scriptural doctrines that are central to Christian claims? The First Amendment guarantees not merely freedom of worship, but free exercise of religion. More than that, the Wyoming constitution is clear that “no person shall be rendered incompetent to hold any office . . . because of his opinion on any matter of religious belief whatever.”

The commission sought to get around both of these obstacles by insisting that Judge Neely’s “crime” is neither what she believes nor what she said, but “what she did.” And what did she do? According to Pat Dixon, “She expressed her unwillingness to follow the law, and she demonstrated her bias against certain groups.” But remember, Judge Neely isn’t required by state law to perform marriages. So one justice immediately asked where either Obergefell v. Hodges or Guzzo v. Mead required that any individual state official must perform a marriage ceremony. Dixon admitted that neither of those cases makes any such law.

Notice, also, that both of her alleged “actions” were done by speaking outside the courtroom, outside business hours, and not to anyone actually before the court. This prompted one justice to ask, “so, if she simply hadn’t performed any same-sex marriages, that’s not a problem. But when she told the world . . .?” To which the commission replied, “That’s right . . . Judges don’t give speeches. That’s what politicians do.”

This exchange caught my attention. What about the dozens of public addresses given by Ruth Bader Ginsburg and scores of judges throughout the years?

The commission cannot credibly deny that Judge Neely’s fundamental constitutional rights are being infringed. The burden is on them to prove that a judge cannot speak about marriage without “manifesting bias or prejudice” toward an individual. They must prove that a judge cannot be an orthodox Christian while still remaining fair and impartial toward those of a different faith. Then, they must prove that the judge has not only been compromised in one particular case from which she could recuse herself, but that she is entirely incompetent to serve on the bench at all.

If they manage to prove all of those things, that would mean that faithful Jews, Catholics, Protestants, Mormons, and Muslims must either cease practicing their faith or be removed from the bench. At the very least, such judges would be forbidden to speak their minds. If, on the other hand, the commission’s proposal fails to pass constitutional muster, the court would do well to reject its entire argument.

Soon the Wyoming Supreme Court will decide whether to keep Judge Neely on the bench or remove her—and everyone who shares her convictions—from Wyoming’s judiciary. They should protect our freedoms to think, speak, and act. If they don’t, it will not be the end of the matter. It will only open the floodgates to a million more questions—and a lot less freedom for all of us.

Jonathan G. Lange is a pastor of the Lutheran Church–Missouri Synod. He has raised his family in Wyoming for two decades, serving parishes in Evanston and Kemmerer. He is active in the public square as a leader of the Wyoming Pastors Network.