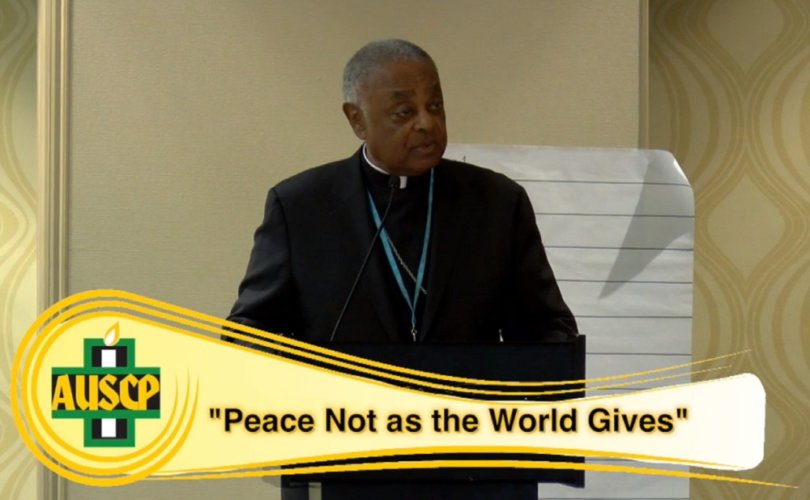 June 25, 2019 (Lepanto Institute) — The Association of US Catholic Priests (AUSCP), which claims a priestly membership of just over 1,300 priests, issued a white paper on May 8, 2019, titled “AUSCP Declaration on the Status of Women.” This white paper calls for the priestly ordination of women and utilizes condemned Modernist reasoning to reach its conclusions. According to the St. Louis Dispatch, AUSCP members will be asked to affirm this declaration at the ongoing AUSCP 2019 Assembly in St. Louis.

The Lepanto Institute has written extensively on the AUSCP's promotion of homosexuality, priestless parishes, female deacons, and more:

This year, Cardinal Blase Cupich is giving the AUSCP's keynote address and Abp. Robert Carlson of St. Louis, MO is celebrating the AUSCP's Mass on Wednesday. Currently, Abp. John Wester serves as the AUSCP's episcopal moderator to the USCCB, Bp. John Stowe is an active member, and Abp. Wilton Gregory, Bp. Gregory Hartmeyer and Bp. Robert McElroy have all participated in AUSCP events. Given what we are about to reveal, these prelates must immediately condemn the AUSCP in order to avoid being actively involved in what is clearly a declaration of heresy.

In the introduction of the white paper, the AUSCP makes abundantly clear that its call for the priestly ordination of women is an adopted and formal position of the AUSCP leadership team. It also encourages AUSCP priests to spread and promote this ideology to vulnerable members of their parishes. It says:

On May 28, 2019, the Leadership Team of the Association of US Catholic Priests (AUSCP) approved a Declaration on the Status of Women in the Church. We invite you to read the document and discuss it in your parish or community.

This 23-page screed goes to great lengths to discard 2,000 years of Catholic orthodoxy in order to make way for the conclusion that the priestly ordination of women is even possible. But once concluded that it is possible to ordain women, it then makes the incredible leap that not ordaining women is an act of injustice that must be rectified.

Leading to the conclusion that women should be ordained as priests, the document begins by directly attacking the Church's most fundamental teachings and structures. In what is perhaps the boldest and most striking assertion, the AUSCP actually proposes doing away with the Church's institutional pillars in favor of a more intuitive approach. In the Declaration on the Status of Women, the AUSCP claims that, the Church abandoned an “open system” of theology due to the rise of Constantine in the 4th century and became “fixated” on “notions of law, order and orthodoxy” and that this fixation continues today. This fixation on orthodoxy “impairs the institutional Church's ability to interact and adapt to shifts in modern biology, evolution and quantum physics.” (p.6)

The AUSCP takes this a step further:

This theological framework has produced ecclesial structures that maintain outmoded philosophical notions of nature, gender, and personhood. Rules, fixed order, dogmatic formulas, unyielding laws, patriarchy, authority, and obedience have rendered the Church resistant to the radical interconnectivity that marks all levels of nature. The Church is bound to die out unless the system undergoes radical transformation. Thus, the institutional Church needs to consider the evolving insights of science and the universe. Or, as Elizabeth Johnson, CSJ wrote, “the church therefore needs to look to the world to discover God's designs for the present time.” [emphasis added]

This call by the AUSCP to change “outdated theology” because it is “out of step with scientific findings” and a “world that is evolving” was expressly condemned in the Canons of the First Vatican Council:

If anyone says that it is possible that at some time, given the advancement of knowledge, a sense may be assigned to the dogmas propounded by the Church which is different from that which the Church has understood and understands: let him be anathema. (Can. 4:3)

Let it be clear, by formally establishing a proposition that perfectly aligns with the Church's formal condemnation of Modernism as a defined heresy — complete with anathema sit — the AUSCP as an organization has placed itself, its members and its supporters in the realm of material heresy. If they do not publicly and without reservation correct this, the material heresy could become formal.

By challenging established Catholic magisterial doctrine as being outdated and stating that it needs to evolve due to “science” the AUSCP is proclaiming a condemned Modernist heretical proposition as true and is worthy of condemnation, not ecclesiastical support!

Page 16 of the white paper calls into question the Church's dogmatic understanding of Sacramental Theology. Due to “Aristotelian” thinking the Church believes that only a male can be a priest. It states:

Since the Council of Trent (1545-1563), Church teaching has used an Aristotelian physical and instrumental model for sacramental causality. In this model, God is the principal agent and source of grace. The ordained minister is an instrument, one moved by God and through whom the sacramental graces flow. This flowing of grace is independent of the moral state of the minister (i.e. whether or not the minister is in the state of grace). Because any instrument must be appropriate to its role, the male gender of the priest is seen to be essential so that he can “image” Jesus Christ. Such thinking leads to the Church's stance that only a male can be a priest.

Page 17 states that Franciscan, liberation and feminist theologies open the way to reconsidering the entire “understanding of both sacraments and grace.” In other words, the Church's teaching on how Sacraments work is wrong, and we need to understand it in a whole new way. This, according to the AUSCP, gives us the opening to change Church teaching on the ordination of women to the priesthood. The document states: “Such Franciscan models of sacramental causality provide us with an opening to reconsider the current Church discipline that restricts sacramental roles primarily to ordained celibate male ministers.”

The AUSCP states as two implications of this new understanding of the sacraments:

With these statements the AUSCP is officially challenging the Church's teaching on the ordination of women.

Of course, Pope St. John Paul II definitively closed the door on the ordination of women to the priesthood in the strongest possible magisterial language in his Apostolic Letter Ordinatio Sacerdotalis. He stated:

Wherefore, in order that all doubt may be removed regarding a matter of great importance, a matter which pertains to the Church's divine constitution itself, in virtue of my ministry of confirming the brethren (cf. Lk 22:32) I declare that the Church has no authority whatsoever to confer priestly ordination on women and that this judgment is to be definitively held by all the Church's faithful. [Emphasis added]

The AUSCP is acting in direct disobedience to Holy Mother Church by calling for the ordination of women as well as casting derision and sowing confusion by attacking her understanding of the sacraments. Again, this is worthy of condemnation, not ecclesiastical support!

By participating in the ongoing AUSCP 2019 Assembly, both Archbishop Carlson and Cardinal Cupich are giving a de facto stamp of approval to the AUSCP and its errors. Their support gives credence to heresy, sows confusion among the clergy and is an open invitation for the wolves to feed upon the faithful. A faithful shepherd would defend his flock from these vile predators, not invite them with open arms into the pasture.

We call on both Archbishop Carlson and Cardinal Cupich to end their support of this heretical organization immediately and to return to their God-given roles as true pastors.