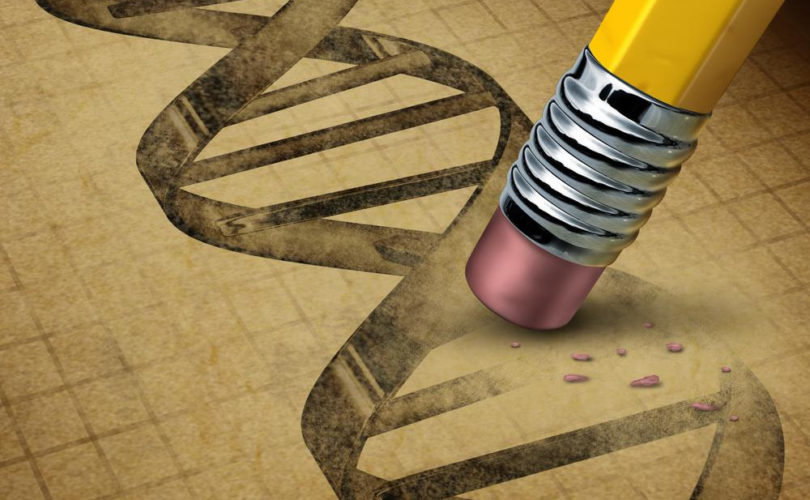 January 15, 2016 (LifeSiteNews) – Yesterday an embryologist in UK asked permission to take the life of thirty children by editing their genes at the embryonic stage. Her goal is to advance knowledge of human development in order to treat infertility. Last month a landmark conference in Washington, D.C., the International Summit on Human Gene Editing, advocated deadly experimental use of children at an embryonic level of development for purposes largely related to curing certain genetic anomalies. What is Human Gene Editing and why did so many scientists at the conference call for an immediate worldwide moratorium?

Formerly referred to as “germline intervention,” Human Gene Editing (HGE) is the creation of a genetically modified human. HGE changes made to a human child at an embryonic level will be passed through normal sexual reproduction to all future offspring. This emerging technology has profound implications for the future of the human race.

Advocates hope to bring generational cures to genetic diseases such as Sickle Cell Anemia and Tay-Sachs Disease which can be specifically targeted for HGE at an early embryonic level. Critics are arguing that the technology is too new and the inherent risks to all of human-kind are too great. Due to the uncharted concerns and very present unintended consequences regarding HGE, many scientists in the summit are calling for a moratorium on all human gene editing. Philip Campbell of the science journal Nature explains why they have called for a moratorium and have rejected papers on the subject:

So we've had human germline editing papers sent to us. These are confidential so I won't say more about them but several papers have been received by several journals and all have been rejected by us either because of technical inadequacies or because of noncompliance with local regulation . . . OR BOTH [emphasis mine].

Poor science and breaking the law are just a couple of the reasons why we should be concerned when discussing proliferation and scientific acceptance of this emerging technology. Here are a few facts to consider:

Human Gene Editing has been condemned by the United Nations and outlawed in over 29 countries (China, North Korea and the United States are not among them). Due to its eugenic history, Germany has enacted some of the strictest criminal penalties for human embryo experimentation.  The Nuremberg medical trials of last century ruled that the deadly human experiments performed by the Nazis during the Holocaust on concentration camp inmates constituted “human experimentation without informed consent” and were considered war crimes. Seven Nazi doctors were found guilty and hung. To prevent the medical research community from repeating these crimes the Nuremburg Code was adopted by most western nations (United States excluded) and became the founding tenant of modern bioethics. If the embryo is a person then HGE would be a violation of informed consent.

Undeterred by international condemnation, China, in April 2015, described their use of a newly developed CRISPR–Cas9 technology to edit the genomes of human embryos. Led by Junjiu Huang at Sun Yat-sen University in Guangzhou, this team of scientists published the first and only paper to date of this controversial form of human experimentation. This new genetic modification technology is called CRISPR, short for “clustered regularly interspaced short palindromic repeats.” CRISPR is incredibly fast, relatively simple and very cheap. A recent biotech startup named Amino has brought desktop bioengineering to everyone for a little under $700.00. For less than the cost of a leading smartphone you can bioengineer your own glow in the dark bacteria by splicing genes in your garage. Their marketing material boasts that “Amino is a small and simple-to-use hardware system that enables anyone to grow and take care of living cells. We are the world’s first publicly available bioengineering platform that can be used at home, in labs or in schools.” They go on to describe the following product line: “These hand-assembled polished rich Mahogany Amino Ones are shipped with the Amino Glow App, a DNA program and the set of chemicals needed to transform the regular bacteria into a glowing organism and keep it growing and glowing! A living Nightlight!”

Or Nightmare, depending on whose hand holds the test tube. These do-it-yourself (DIY) bioengineering kits have been criticized as opening the door to “bio-hackers” who may use the technology for malevolent intent. From DIY DNA kits to community laboratories where CRISPR is available to untrained amateurs, the possibility for domestic bio-terrorism becomes a probability. “One of the biggest fears surrounding CRISPR is that it could be used to create a genetic modification designed to spread through a population of organisms at an unnaturally fast rate,” says Heidi Ledford writing for the science journal Nature. The FBI routinely builds relationships within the bio-hacker community so that any realtime threat can be assessed and hopefully neutralized.

As the price of this “cut and paste” gene sequencing has reached hobbyist levels the temptation to alter children at an embryonic level has proliferated. Testing material is easily acquired. An excess of over 500,000 human embryos have been created through the IVF process. Clients routinely abandon their cryogenically preserved offspring rather than continue to pay for the upkeep of their frozen embryos. It is increasingly common that they altruistically donate their left-overs to science. With the easy availability of human test subjects whom the National Institutes of Health have declared non-persons, it is just a matter of time until a rogue scientist using CRISPR technology repeats what was done in China last April and produces a GMO child.

Once the genie is out of the bottle there will be no putting it back. Perhaps we should heed science fiction writer Bruce Sterling, ““Maybe we're about to radically change the operating system of the human condition. If so, then this would be a really good time to make backups of our civilization.”

Daniel Becker is president of Personhood Alliance, lecturer, and author of the book Personhood: A Pragmatic Guide to Prolife Victory in the 21st Century.