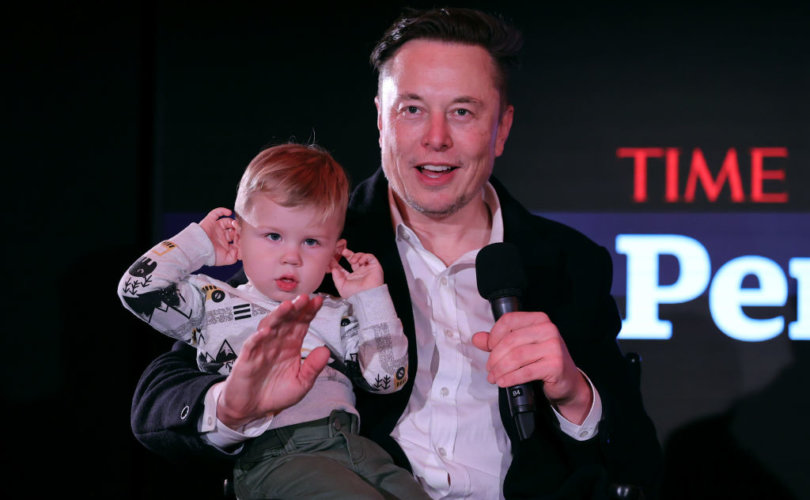 Elon Musk and son X Æ A-12 on stage at TIME Person of the Year on December 13, 2021 in New York City.Theo Wargo/Getty Images for TIME

(LifeSiteNews) — The world waits with bated breath to see if Elon Musk is crowned the king of Twitter today.

Last week, many conservatives cheered the news that the eccentric billionaire and “free speech” advocate had unveiled a $46.5 billion offer to buy the outstanding shares of Twitter, making him the sole owner in the largest attempted take private of its kind in history.

Mr. Musk’s financing package, like so much of what he does, is very non-traditional.  With $33.5 billion (of the $46.5 billion) coming from his own fortune, the offer is decidedly less “leveraged” than a traditional leveraged buyout (LBO).  Acquirors in this type of transaction typically seek to borrow as much as possible, minimizing their required cash (equity) to close the transaction. Beginning with the LBO craze of the 80’s and 90’s, investors who have engaged in these types of transactions have continually re-learned the hard lessons of using too much debt when recessions strike and markets turn.  Notwithstanding, the “typical” debt-to-equity ratio of an LBO is 2:1, whereas Elon’s money is certainly where is mouth is, with just a 1:2 debt-to-equity ratio as his latest offer.

With a current market capitalization (total market value of all outstanding shares) of around $36.6 billion, Mr. Musk’s overall acquisition offer to shareholders represents a 27% premium to current market value – not a bad deal for a company whose net income has been negative for 10 of the last 12 years, and whose stock has never paid a single dividend.  Twitter is expected to report earnings next week, but some analysts are predicting further headwinds for the company, with profitability and its user base seeming to wane.  Were I a shareholder in a deteriorating asset, I’d consider a 27% premium-to-market-value offer very seriously.

There is much hemming and hawing about the proposed buyout, especially among the left.  Ellen Pao, the former CEO of reddit, pounced on Musk’s alleged racism and sexism in her WaPo article aptly titled “Elon Musk’s vision of ‘free speech’ will be bad for Twitter.”  Since acquiring his 9.2% stake in the Company, the social media meltdown has been palpable, with every Ad Hominem accusation imaginable being slung Musk’s way, from both Company insiders and other self-appointed technology experts alike.  Liberals are tying themselves in rhetorical knots trying to explain how Mr. Musk’s “version” of “free speech” is somehow more draconian than the prevailing, omni-present censorship most social media users acknowledge is the norm.

Meanwhile, a cohort of House Republicans led by Congressman Jim Jordon are demanding Twitter’s Board of Directors preserve all records related to the Musk buyout offer, fearing the Board, whose fiduciary duty to the shareholders compels them to consider (if not accept) the offer, may attempt to conceal their true reasons for rejecting it.

As this financial and political drama plays out, even Presidents have weighed in on online platforms; most recently Barrack Hussein Obama, whose 2008 campaign pioneered the use of social media, lamented, “People are dying because of misinformation.” This, he says, technology companies have a duty to address.  On the flip side, a Musk-run Twitter has consequences for former President Trump as well, who has been banned from the platform for years.  A “freed” Twitter may also dash Mr. Trump’s hopes to launch his own social media platform, Truth Social.

The actions of Mr. Musk these last weeks have thrust the issues of censorship and free speech squarely into the international zeitgeist, raising two essential questions.

First, is Elon Musk even a trustworthy champion of free speech?  Make no mistake, the Tesla, SpaceX, Neuralink, and Boring Company founder is an unnatural ally, to put it mildly.  Sure, he occasionally challenges the ruling class narratives by questioning overpopulation, ostensibly opposing forced vaccinations, and even casually referring to arch-villain Bill Gates as a “knucklehead.”  At the same time, Musk is a man seeking to micro-chip all humanity, merging computing with the human brain, beginning as soon as this year.  He was “super fired up about Biden,” the fake Catholic usurper-in-chief who is presiding over the continual slaughter of innocent human life, an issue Musk has wavered back and forth on, despite seeming to support Texas Governor Greg Abbott’s latest abortion ban.

Second, is so-called “freedom of speech” a worthwhile goal?  Does everyone really have a “right” to say anything he wants?  Do people have a right to be wrong?  Do blasphemers have a right to insult God?  Are lies protected speech?  If so, by whom?  Whether one consults Blessed Pius IX’s Syllabus of Errors or Benedict XIV’s Quanta Cura, or even searches a bit earlier, when in 1832 Gregory XVI condemned “the license of free speech” as “absurd,” “erroneous,” and a “pestilence more deadly to the state than any other,” the issue seems clear. Catholics who are quick to lionize Elon Musk for his attempt to “save free speech” on Twitter may want to reassess whether such a goal is really as noble or absolute as the 1st Amendment would make it seem. Musk himself tweeted a crass vulgarity about Bill Gates just yesterday. Ought we really celebrate the new potential owner of Twitter is merely opening the floodgates to further sexually explicit content on one of the world’s largest social media platforms?

The timeless Catholic principal of error non habet ius (“error has no rights”) didn’t end in 1967.  We must continually consult the unanimous magisterial voice of the Church, as articulated through the papacy (especially those pontiffs who denounced liberalism, and later modernism, in the 19th century) if we are to remain grounded amidst this current struggle for control of Twitter.  Let us never be swept away by Republican talking points, especially those whose premises are indeed, anti-Catholic error.  Today’s conservatives are yesterday’s liberals.  Conservatism is, indeed, just liberalism in slow motion.

Mike Parrott, father of six, is a lecturer in corporate finance, host of the Restoring the Faith Media podcast, and former Wall St. investment banker.