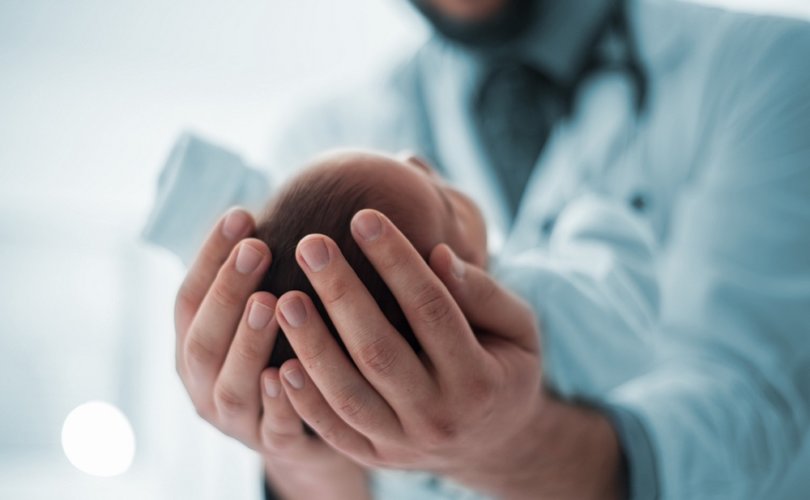 February 21, 2020 (LifeSiteNews) — Dr. Rocco Pascucci was a first-year pediatric resident at a teaching hospital in Monmouth County, New Jersey in the early 1980s. One day, while he was working in the intensive care nursery, a cleaning woman came to him with a message he has never forgotten.

“She told me there was a baby crying on the garbage can in the little treatment room,” he recalled.

He went into the four-by-four room where medications were kept and found a tiny baby wrapped in a hospital blanket. The baby had been left on top of a big metal garbage can, and he was crying.

Not stopping to wonder why the child had been abandoned there, Dr. Pascucci put the baby in a warmer, put him on oxygen, and inserted a line into his umbilical artery, which is how premature babies receive nutrition and how health-care workers check blood gases. The care the infant received was standard for any premature baby.

After the baby was stabilized, “a high-risk OB/GYN came in and yelled at me,” Dr. Pascucci said. “He told me I had just saved an abortion. He got into a huff and walked out.”

As Dr. Pascucci later learned, when the baby had survived the abortion, a second-year resident determined he was under 24 weeks’ gestation and was not viable. Nurses told him it was standard procedure to leave these babies on the garbage can until they died.

It was Dr. Pascucci’s impression that this was not a rare occurrence.

“The cleaning lady knew it,” he said. “The nurses knew it.”

He believes that the boy was older than 24 weeks but small for his age, possibly the result of his mother smoking or using drugs during pregnancy.

“The resident said his eyes were fused, but this baby’s eyes were not fused,” Dr. Pascucci said. “He was looking right at me.”

Dr. Pascucci’s intervention saved not only that boy’s life, but other babies who would survive abortion in that hospital.

“After the OB yelled at me, I went to the head of pediatrics to talk about what happened,” he said. After that, these tiny survivors were given the care they needed.

On Tuesday, the U.S. Senate will vote on a motion to consider — again — the Born-Alive Abortion Survivors Act. This bill would require life-saving care, and transfer to a hospital, for any baby who survives an abortion. Abortionists who failed to comply would face jail time.

Sixty affirmative votes are needed before the bill can be brought to the floor for a vote. Last year, it fell short, with only 53 senators voting for it and 44 voting against. Three Democrats crossed the aisle to vote in favor. Three Republicans missed the vote.

There is no guarantee the bill will pass this critical first test next week, but Dr. Pascucci will be watching from New Jersey, where he has since retired from his practice and serves on the Holmdel Township Committee.

I came into contact with Dr. Pascucci when I was living in Holmdel and concerned about its lack of a fire department. He answered my email right away, and we got into a discussion about my work in the pro-life movement. He told me his incredible story. When I contacted him again and asked him to go public, he didn’t hesitate.

“I’m not super-religious or even a big Republican,” he said. “But these are our brothers and sisters, and we’re killing them. If they are born alive, we should try to save them. It’s simple. It’s humanity.”

Although Dr. Pascucci never again met the boy he found on the garbage can, he did keep up with his case. The boy suffered from no long-term health problems as a result of his unorthodox early delivery and was placed with an adoptive family, all thanks to a compassionate hospital housekeeper and a new pediatrician devoted to saving young lives.

Most bills introduced and debated on Capitol Hill are matters of policy, and usually of complex prudential judgment, where people committed to the same principles can disagree and work out those disagreements by what is ultimately a process of trial and error.

But not this time.

When the decision to be made is whether to protect a baby or not, the policy is the principle. “Life and death” is not a choice of prudential judgment. What the doctor said about what he did also applies to what the senators need to do: “It’s simple. It’s humanity.”

Leslie Palma is director of communications for Priests for Life.