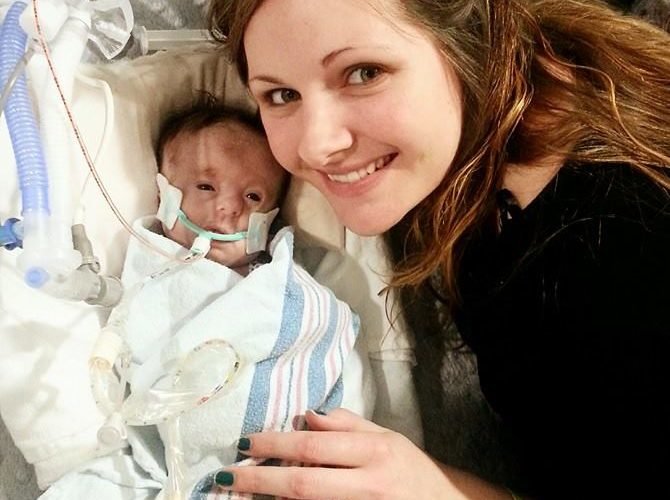 March 10, 2015 (LifeSiteNews.com) — Some of our new friends Naomi and Matthew found out they were pregnant with their 4th child and were quite excited. But Matthew had a feeling that something was not right. They decided to get blood taken for the Quad Screen which screens for Down Syndrome and other chromosomal abnormalities. A few days later, they received a call from one of the nurses. She said the screening came back abnormal and that their baby had a one in seven chance of having Edwards Syndrome, also known as Trisomy 18.

The next step was a high-risk ultrasound.  The ultrasound showed their baby had many brain and heart defects, which all aligned with a Trisomy 18 diagnosis. The high-risk doctor wanted to do an amniocentesis, but since there is a risk for miscarriage they politely declined. He strongly urged them several times to terminate the pregnancy, since Trisomy 18 is considered “incompatible with life” and is seen by many doctors as a fatal diagnosis.

My wife Jesi and I have a little six-year-old girl, Faith, with Trisomy 18 and got connected with Naomi and Matthew during the pregnancy. We reach out to lots of parents to offer support and help because our own journey has been a struggle to get care for our daughter, so we want to warn parents about the pitfalls ahead of them which we did with Matthew and Naomi. We warned them to be cautious with all doctors until the doctors demonstrate that they will truly help their child, because we have seen so much deception by doctors who want to let our children die. Many doctors do not believe that we should have even let them live.

Their baby was 19 weeks gestation at this time, which is the legal age to abort. Naomi wrote, “We saw our little one via ultrasound just minutes prior. We saw fingers, toes, legs, arms… We saw a BABY, not something easily disputable. We are pro-life advocates and we were able to speak to that doctor about our values. We told him that no matter what the diagnosis, we were going to give this baby the best chance at life. We value every life, no matter how many chromosomes he/she might have.”

They had a 4D ultrasound done to see what sex their baby was and found out the child was a girl! They decided to name her Eliana which in Hebrew means, “My God has answered.” Several weeks later, they took a closer look at Eliana's heart and the doctor found multiple defects, including a few holes in her heart. He also said the umbilical cord blood flow was abnormal and wanted them to follow up with their doctor the following week.

That next week, Naomi went back to the high-risk doctor for another ultrasound and a cord blood flow test. He informed her that the cord blood flow was very bad. Naomi told us the doctor said “If I want to hold a live baby, she needed to be delivered within days. I went home, grabbed my bags and my husband, and we headed straight to the hospital. They gave me 2 rounds of steroids to help her lungs mature. She was delivered by a ‘gentle cesarean’ and weighed 2lbs 6oz and measured 14 inches long. She did not breathe at first and needed a little support from a CPAP, but other than that she was great!”

Eliana was alive, but with many obstacles in her way, including the holes in her heart and several other heart complications. The holes in the heart can cause heart failure, which creates too much pressure on the lungs and causes the lungs to fill up with fluid. Eliana’s doctors were looking into solutions including heart surgery, but Eliana was too little for surgery. Jesi and I were both surprised to see that Eliana appeared to be getting good help because most parents of T18 children have to fight for care. Her doctors had told Naomi and Matthew that Eliana would have to grow to 9 lbs before they could do the heart surgery, but this statement did not sit well with me because our own daughter was expected to have heart surgery as well yet at a much smaller size. I checked with our cardiologist who said Eliana was too little, but only needed to get to about 5 lbs before surgery could be done.

Eliana continued to live and grow even though doctors did not think she would survive and said there was nothing else to be done. In fact, she was showing signs of heart failure and things began to look bleak. Matthew and Naomi wanted to look for second opinions at a number of hospitals around the country. Their neonatologist came to see them since they were requesting multiple second opinions. The doctor was irritated with them which took them by surprise. The doctor said “We have gone above and beyond what we should have even done for Eliana.” … And there it is, he just revealed his heart. They were “helping” Eliana because they thought that she was going to die, but now that she was living much longer than expected, the doctors began to push Matthew and Naomi to let go of Eliana. Suddenly, their advice was to remove Eliana from the breathing assistance that she was receiving and let her suffocate to death.

Naomi and Matthew were determined to help their daughter and found a doctor in St. Louis willing to do heart surgery so they began making preparations to leave. Despite the adamant demand by their neonatologist to let Eliana die, a cardiologist at their current hospital found out about Eliana’s situation and offered to do the surgery suggested by the St. Louis doctor. The plan would be to use a catheter to reach Eliana’s heart and make the hole between the upper chambers of her heart larger to lower the pressure going to her lungs. Then they would do open heart surgery and place a band around her artery to also help remove pressure.

Surgery day came and we waited anxiously to hear how things were going. The doctors did not believe Eliana would survive the surgery. Many doctors tell parents that T18 children cannot survive heart and other surgeries well, but in reality, 90% of T18 children survive heart surgery. Eliana’s case is more complex than most of the T18 children with which we have worked and her weight was just under 5 lbs making it even more difficult.

News was back…Eliana had survived, but not just survived. After the cardiologist did the catheter procedure and placed the stint to hold open the hole, they checked the pressure to her lungs. It dropped from a very high 18 to normal pressure of eight, so they did not even have to do the open heart surgery. Eliana is doing extremely well and continuing to grow. You can follow her story on Facebook here.

Recently, one of Eliana’s neonatologists said, “Eliana is an ethics paper.” I beg to differ…the neonatologists actions are the ethics paper. I wish that I could say this unethical neonatology behavior is an anomaly, but sadly this story happens all across this country. In fact when it comes to our T18 children, this is the norm. Where innovation should be leading to new discoveries with our children, many of our medical professionals are using DEATH as a cure.

Brad Smith and his wife Jesi are Save The 1 (www.savethe1.com)  pro-life speakers from Rochester Hills, Michigan.  Learn more about Brad and Jesi at www.keepingourfaith.com.