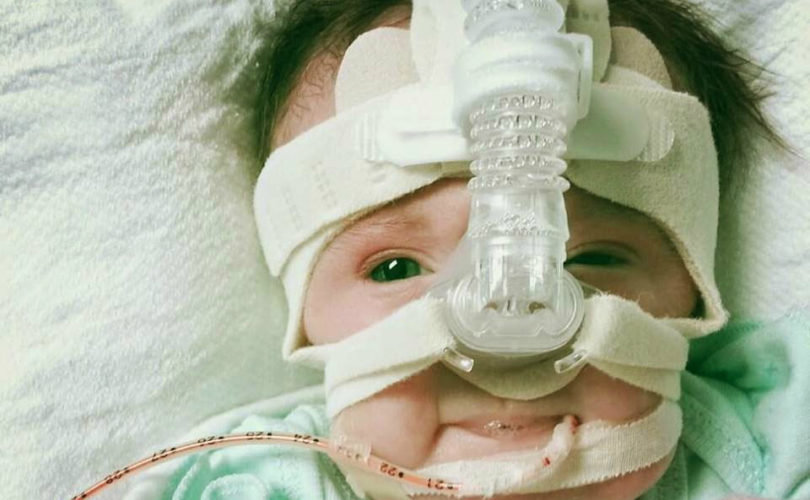 Confused. Upset. Scared. Angry. These were my feelings when the high risk doctor from Riverside Hospital’s Maternal Fetal Medicine told me that my baby was going to die. He told me she had Trisomy 18 and bluntly stated that she was, “incompatible with life.” He asked my husband and I if we wanted to “terminate the pregnancy.” We politely declined.

He asked us again. We told him no once more. For a third time, he strongly stated that she was going to most likely die in my womb and there would be no reason to further the pregnancy. Once again, we declined, but this time we added, “This baby is our child. We just saw little arms, legs, fingers and toes on the ultrasound! Just because she has an extra chromosome and a few abnormalities, doesn’t mean she is not our sweet, precious baby. We are pro-life and you are not going to change our minds.”

Eliana made it to 33 weeks gestation before she had to be delivered due to her cord blood flow being reversed, which could have caused her to be stillborn. She was born December 5th, 2014. She needed help from the CPAP to open up her lungs (just like most preemies). She was transferred to Children’s Hospital due to her little heart having many unforeseen abnormalities. Her cardiologist said, “Eliana’s case is the most complex I’ve had in my entire career.”

Originally, the Heart Center at Children’s Hospital denied her heart surgery, knowing that without it she would die. Her neonatologists told us that they’d give her narcotics, take her off respiratory support, let her pass in peace and allow her to “die with dignity.” Up to that point, she had been low on her oxygen requirement and moderate on her pressure requirement. She just needed a little help — help which the medical community denied her.

I contacted eight different children’s hospitals around the nation. A surgeon out of St. Louis, who is extremely Trisomy-friendly, offered to do the lifesaving surgery! Once I told Eliana’s cardiologist that we were planning to transfer, he kicked things into high gear. He took a surgeon aside and pleaded with him to do the surgery on Eliana. He agreed!

On February 26th, Eliana got the heart surgery she desperately needed! She is doing very well and we are working with her neonatologists to get her home. She still has many, many obstacles to overcome, but the fact is, we gave her the opportunity to fight. We fought for her in the womb when she didn’t have a voice. We fight beside her now.

The pro-life movement is upon us! There is a worldwide movement forming. Many organizations supported the Geneva Declaration on Perinatal Care which was presented in front of the United Nations on March 11th. This declaration will end terminology like “incompatible with life” and promote support for mothers to continue the pregnancy after a fatal diagnosis, such as Trisomy 18. I urge everyone to join in the movement!

Abortion should be illegal because every life, no matter how short, has value! We don’t know how long we will have Eliana. We are very thankful and grateful for every minute we have with her. We believe she is completely compatible with life and most certainly compatible with love!

BIO: Naomi Coy is a wife, mother and pro-life blogger for Save The 1, where this article first appeared.  She has almost 18,000 followers on her Facebook page, Eliana's Journey!

Doctors refused to save this baby with Trisomy 18, but her parents fought tooth and nail. Now she’s thriving!
Trisomy Angel: The boy with a ‘divine purpose’ who taught his family the meaning of love

‘Utterly pro-choice’ comedienne refused to abort son with Trisomy 18: it was ‘the right choice’
My Trisomy 18 son is not alive because of a miracle. He is alive because we chose life for him.