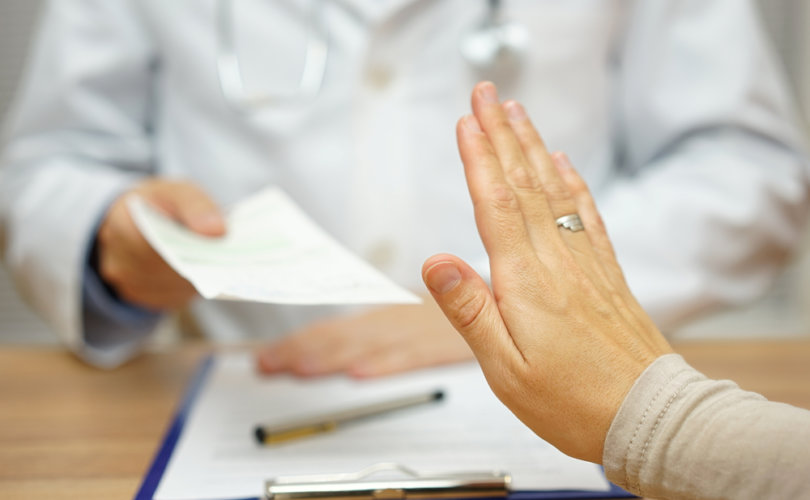 Editor's note: The following story is from a young woman who wishes to remain anonymous. She wanted to tell her story about her experiences of pressures from the medical profession to have an abortion. She hopes this witness can help others to be more prepared and have the courage to stand up for their beliefs if they are faced with difficult decisions.

July 3, 2019 (LifeSiteNews) – At 25 years old everything in my life was perfect. I was recently married to my childhood crush and we were expecting our first child. As soon as our pregnancy was confirmed, there were lots of tests and exams and appointments that are all routine and normal.

Early in the pregnancy, I was asked to consent to additional testing. I didn't really understand it and I didn't really ask about it. I just understood that it would be minimally invasive and that it had something to do with detecting abnormalities. I got a call close to my 20th week gestation at 5:30 in the evening. The tests indicated that my child may have down syndrome. I had an appointment with a genetic councillor at 8:30 the next morning and I would learn more there.

My husband and I attended the meeting and learned that based on the tests, our baby had a 1 in 200 chance of having down syndrome. We could find out for sure with an amniocentesis but we had to decide immediately and go downstairs immediately to get it. The test came with a 1 in 100 risk of miscarriage. We had no time to think or talk to our parents and we did not even think of calling the chaplin.

We were both ready and willing to raise a child with special needs but we were also young and scared. Scared that our child might enter the world with additional challenges and scared of going 20 more weeks not knowing one way or the other. We consented to the test, walked downstairs and it was administered.

I regretted it immediately.

Why would we risk losing our child for such a low probability? Why would we take the test when the results would not affect the outcome of the pregnancy? Why did we have to decide immediately? By the Grace of God, my daughter was ok. She carried to term and she was born healthy and without complication. The days waiting to see if I would miscarry were hard and I was filled with remorse that we took this risk for no good reason. The reason we had to decide immediately is because as we neared the 20-week mark, it would have been more challenging to perform an abortion had we decided we wanted one.

A little over a year later, we were blessed with another pregnancy. We were thrilled and agreed to avoid the testing that led to the fear and confusion the first time around. Life was good and I went to my appointments as usual. At about 23 weeks, we learned that there was an abnormality on an ultrasound. Our son's left ventricle was too large. If things continued, he would be born with half a heart. We were referred to pediatric cardiology and sent for an echocardiogram. This all happened within days of the initial diagnosis.

Our first meeting with our son's cardiologist did not go well. We were told that the initial diagnosis was correct. Our son would die shortly after birth unless they could find him a heart and baby donor hearts are rare. Would we like an abortion? I believe it could have been done that day.

My husband and I had done some research on the subject and had read about a procedure that was done in Boston to save children with hypoplastic left heart syndrome. We asked to be put in touch with that team. The medical staff told us we would need at least $100,000 cash for them to even talk to us. We asked again to be put in touch with that team. It was only then that the medical staff informed us that Sick Kids in Toronto was doing the same procedure but that they did not like the results they were seeing. We asked to be referred.

The next day we got a call from Sick Kids. I was now about 25 weeks gestation. We travelled to Toronto the next day. A day or 2 later, our boy was receiving lifesaving in utero heart surgery at Mount Sinai. He still needed several open heart surgeries in his first year of life but he is now a happy 6-year-old with no restrictions, on no medications and able to do all the things little boys should do. He has his whole heart and it is functioning well. He should live to be an old man. Many children, however, do live very meaningful lives with half a heart. There are surgeries they do at Sick Kids to make that possible. I was not made aware of that option during my initial meeting at the cardiologist either.

No support for my unborn baby

We had a third child with little drama. It was a nice relief.

It was our 4th pregnancy that really challenged us, though. Shortly into the first trimester, I knew that something was very wrong. I got confirmation at 12 weeks. After a series of specialist appointments, I learned that I have MPA vasculitis. My kidneys were shutting down and I needed chemotherapy to stop it. Without treatment, I would die within 5 months. I had 6 months left of the pregnancy. They could not administer chemotherapy to a pregnant person, so we would have to abort our baby. I was older now and not so easily frightened. I said “no” and I meant it.

The health care team was shocked. They said that there was only one course of treatment that could be administered to me while pregnant but that it was not effective. I agreed to that treatment and was referred to a high-risk OB.

My health care team was not happy. They teamed up on me, at times 3 on 1, insisting that I had to do the chemotherapy, that my child would not survive the pregnancy anyway and that the treatment I wanted would not work. I would hear them on the phone talking to my OB trying to get him to convince me to have an abortion.

My OB was Catholic and although he went over my options with me and once again made me aware of the seriousness of my situation, he did not pressure me into having an abortion. He respected my informed choice. The treatment worked. It was a difficult 6 months but I delivered a healthy baby girl. My choice cost me 70% of my kidney function but my baby lives and I have not regretted my decision for a single second.

The treatment stopped working and I agreed to the chemotherapy 5 months later. It didn't work. After jumping through a bunch of hoops and filling out the necessary paperwork, I am receiving another drug that is very expensive and not covered by Ontario's health care plan. I did receive funding for it and we are praying that it will be more effective. I am praying for the privilege to live long enough to raise my children. I only have access to this drug for the flare up. Any maintenance doses I need will have to be paid for out of pocket. My kidneys were shutting down and I had to wait for someone at the top to decide if I am worth investing in. I can get an abortion same day, I can get dialysis, and even an organ transplant, I can have a pill to make it all end so that I don’t suffer but access to the drug I need to live is limited. We live in a country where death is a right and life is a privilege if not by law then certainly by practice.

There was no support for my unborn baby.

Some friends and family thought that I was being irresponsible by choosing to keep my child and delay treatment. They spoke openly about it behind my back. Those are the same people who fuss over my daughter and declare her to be absolutely adorable.

It did not feel like I had a 'choice'

So as you can see, it is not just teenagers and victims of violence that are affected by this issue. People have to choose a side when they are young before they are in a situation where they are terrified and an “out” has been offered to them. God and most of my family and my community has stuck by us throughout it all. Prayer and good council has kept us strong in uncertain times.

Throughout our entire journey, my husband has always been very supportive of me, but the road hasn't been easy for him. If at any time I chose an abortion, it would have been administered immediately and without even consulting him. I used to bring him to appointments for support and he was often treated like the decision had nothing to do with him and he should not be there. He used to do the paperwork for our kids after delivery so that I could rest and recover. But, the paperwork for our youngest 2 were rejected because he submitted it instead of me. When he called the government to inquire about the paperwork, they would not even release any information to him about his own children and would only speak to me.

The thing is that through all of this, it did not feel like I had a choice. I was told what to do and given certainties that were anything but. I had to fight for the lives of my children.

They say that the first step in creating a genocide is to dehumanize the group you want exterminated, I’d say we as a nation have accomplished that.

It means that when a friend comes to me to say that they had a miscarriage, or an ectopic pregnancy or a stillbirth I will mourn their child with them. I believe they lost someone dear to them. It means that if a friend comes to me saying that they had an abortion, I will also mourn their loss; because a life was lost. Whatever the reason, whatever the circumstances, a life was lost. I am not pro-life to place blame or point fingers. I understand what it is to be scared and I can certainly find compassion for those who felt they had no other or no better choice. But I mourn for those lives because they were lives and I am not ashamed to say it.

Life is precious, we should cherish it.