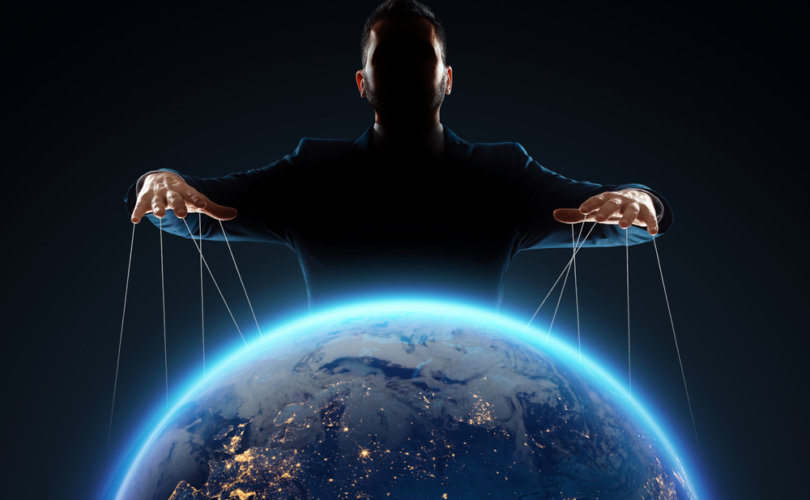 LifeSite Editor’s Note: This article is presented for readers to consider a possible scenario that may occur in the coming months. Recent developments and statements emanating from the World Economic Forum have given indications that the next step on the way to implementing the Great Reset may be imminent – an engineered world economic collapse as a necessary prelude to the imposition of a digital world currency, which Klaus Schwab and the WEF have frequently been discussing and promoting.

(WND News Center) – If you want to understand how the Democrats set their strategies on any issue or objective, just ask yourself, “How would a Hollywood scriptwriter story-board it?”

From the Benghazi botched kidnapping plan, to the Russian collusion and impeachment scams, to the COVID-19 plandemic, to the Ferguson-through-Floyd race-rioting, to the January 6 “White Supremacist Insurrection,” it’s pretty easy to see how events and accompanying propaganda seem to follow pre-set story-boarded narratives. In other words, the progressives’ “tide of history” is always pro-active, not reactive.

True, the story-boards are adjusted in real time for unforeseen developments but always to preserve the pre-set narratives as the highest priority, because for progressives, the narratives are “scripture,” while “reality” is just a culture-created illusion that must be conformed to “scripture.”

Thus, to the leftist elites, DNA and physiology-defined male/female gender is actually fluid and malleable, while subjective, self-perceived “sexual orientation” is fixed and immutable; grotesque ideology-based double standards in the enforcement of the law are applauded, and irrefutable documented truth about the righteousness of various police shootings of dangerous criminals, who happened to be black, is simply deemed irrelevant.

A leftist narrative doesn’t have to be true, or universally convincing, but only sufficiently plausible to persuade and retain a majority of the public. That some people publicly dissent actually helps their cause because “Us vs. Them” social polarization (which they control) helps to solidify the loyalty of the sheeple to the narratives, in the same way Blue vs. Red political campaigns work to separate most voters into two hyper-partisan camps.

For example, the elites want the “unvaxxed” minority to be raising their voices in anger and engaging in civil disobedience so that the more ambivalent members of the pro-vax side think that taking the jab is their best way to signal loyalty to the side of virtue and distance themselves from the “nutcase fringe” (explaining why so many people brag about getting jabbed on social media).

Conversely (and perversely) their campaign of BLM and Antifa rioting in 2020 served the same purpose in reverse, prodding the propaganda-entranced “majority” to signal their “anti-racism” virtue by wearing Black Lives Matter T-shirts and babbling about white guilt. (I use the terms “majority” and “minority” advisedly here because the leftist definition of “majority” always includes as many dead people and identity-theft victims as they need to steal an election, and their definition of “minority” is any-sized group of dissenters.)

Leftist strategic planning is easy to recognize once you imagine it in story-board form. The elites were always going to declare victory over COVID at the most politically strategic moment, and that moment had to be in 2022 to help them in the midterm elections.

Plus, they’ve always expected Joe Biden wouldn’t last to 2024, so they wouldn’t waste the political capital of a victory over COVID pandemic to bolster him in 2021. Instead they’ve done the opposite: doubling-down on the plandemic and setting up Biden as the scapegoat for all of their failures.

I think they plan to dump or sideline him within the next 90 days after ratcheting up the pain and misery index most likely in the form of a “Great Collapse.”

The idea is to make the “before picture” so bad that the “after picture” of a “Great Reset” has greater positive impact on the public. In movies they call this “before picture” the “pit of despair,” and it’s always followed by a stunning victorious recovery that marks the final climax of the film.

I predict that a “stunning victorious recovery” from the plandemic is scheduled for April or May to capitalize on the theme of spring renewal, followed by a river of “infrastructure” funding flowing into the economy (and the pockets of key Democratic and RINO ballot-harvest specialists) through the summer and fall.

What is the evidence for this narrative pivot?

1) The CDC quietly announced back in September that it would stop using the “PCR” test for diagnosing COVID cases on Dec. 31, 2021. The inventor of PCR technology, Dr. Kary Mullis, made it clear that by using certain protocols for the PCR test, scientists can come up with results they want, saying with PCR, “if you do it well, you can find almost anything in anybody.”

Thus, the PCR test was always a scam for the purpose of (vastly) inflating COVID numbers with false positives. But even as the CDC honchos announced they were dropping the PCR test, they kept it in play until Jan 1. Why? To ensure the highest possible 2021 case-count for a more impressive contrast with vastly lower numbers in 2022.

2) Then, on Jan. 8, the new governor of New York, Kathy Hochul (having replaced the nursing home mass murderer Andrew Cuomo), issued a report on current (dead of winter – peak flu season) COVID hospitalizations. New York has always been ground zero for plandemic statistics and propaganda, but for the first time it distinguished (in the data itself, not in the explanation of the data) those patients admitted “for COVID” (49%) from those admitted “with COVID” (51%).

So it’s pretty easy to predict that their 2022 statistics are going to report only people admitted “for COVID,” guaranteeing a better than 50% drop in hospitalization numbers based on that factor alone. With the PCR test gone, most or all the false positives will also be gone – deflating the COVID count further.

3) Suddenly in the new year there are media figures, pundits and politicians either admitting error or suddenly coming out as harsh critics of the public health officials to get ahead of the narrative pivot from crisis to recovery. Early examples are cited in this Zerohedge article. Look for a lot more of this.

4) Bolstering my prediction of a Great Collapse is fresh news on global “supply chain” problems.

Lastly, here is my prediction of how the media will spin all the 2020-21 tyranny to protect the tyrants: “An understandable fear of this terrible disease combined with a genuine concern about protecting the public caused some leaders and pundits to over-react a bit, BUT in the end it all worked out for the best because together we have finally achieved victory over COVID-19. So lets not live in the past or place blame on those who may have been a little overprotective in their actions, but let’s look to the future and come together to build back better.”

I believe this has already been story-boarded.