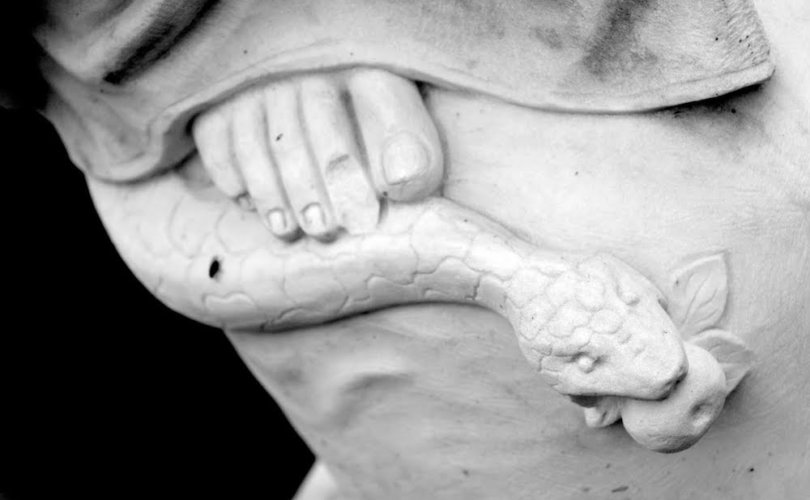 September 28, 2016 (NCRegister) — Satan is no idiot. He has successfully convinced most Catholics that moral issues are political issues. And in so doing he has successfully shut down a huge amount of moral exhortation and reflection. This is especially true in a political season such as this, when the distinctions between the candidates on critical moral issues could not be clearer or sharper.

Among the moral issues that have been most politicized are non-negotiable issues for any Catholic: abortion, euthanasia, embryonic stem cell research, and same sex “marriage.”  These are non-negotiable issues because there is no room for nuance or degree of support. You are either for them or against them. There is no middle ground. They are outright forbidden by Church teaching and no Catholic may agree with or support abortion, euthanasia, embryonic stem cell research or same-sex “marriage” in any degree whatsoever. This goes for every Catholic from the highest political officials to the lowliest and most unknown Catholic in the pew. This precedes politics, party loyalties, political leanings or any such thing.

But did I mention Satan is no idiot? Indeed, he has convinced many that Catholics who clearly articulate Catholic moral teaching on these non-negotiable issues are merely “talking about politics; and how dare they!” And cowed by this satanic trick and lie many clergy and other Catholics sadly cave and run for cover in speaking to these issues at all, not just in political seasons. Other dissenting Catholics buy Satan’s lie because it gives them cover and helps to silence foes.

To again be clear, abortion, euthanasia, embryonic stem cell research, and same-sex “marriage” are moral issues, and the Church must teach against them no matter where the political lines fall.

The Catholic position on these matters currently coincides with one political party’s platform over another. But this not the intention or fault of the Catholic Church. These are matters that most Americans once agreed on and are now matters that have divided out along political lines.

The Catholic Church has not moved one inch. Rather, it is a confused culture that has changed and politicians and parties have moved and maneuvered for reasons of their own. But to say that abortion is a grave moral evil is no more political today than it was in 1950. And just because politicians and dissenting Catholics say it is political does not make it so.

I, and I pray every other faithful Catholic, will vigorously and confidently refute the charge of “being political” when we teach on these non-negotiable truths. I pray we will refute such charges as did St. Paul when he said, We do not use deception, nor do we distort the word of God. On the contrary, by setting forth the truth plainly we commend ourselves to everyone's conscience in the sight of God. (2 Cor 4:2). No true Catholic or disciple of Jesus can do anything other than to manifest the truth plainly and draw others to conversion.

An additional problem at the intersection of Catholic moral teaching and politics is that there are a number of other moral issues that, while important, admit of distinctions and varying solutions. They involve matters in which reasonable people will differ. These include matters of economic justice, care for the poor, immigration issues, and so forth. Unlike the non-negotiable issues above that admit of no exceptions or middle ground, these sorts of issues can call forth various policy solutions.

To exhibit care for the poor is a critical moral issue that is very important to God. It is one the moral issues most often mentioned by God, and his prophets reserve some of their most severe scorn for the neglect of the poor.

However, the best way to care for the poor is debatable. Should it be a work of government? If so, at what level, federal, state or local? Or is private and personal care for the poor more in line with the biblical mandate? Further it is hard to find anyone who seriously denies that the poor should be cared for. The issue is how, and by whom, and what methods are best.

Immigration too is a serious moral issue, also very important to God. In over one hundred places in scripture God insists that we must care for the “stranger and alien” in our midst.

Here too though, there are legitimate questions as to border security, and concerns for law and order in immigration lest the nation be overwhelmed. I am particularly upbeat about immigrants and immigration. The Catholic Church is right to insist on biblical norms and challenge this land of ours to greater generosity and compassion toward immigrants in difficult situations. But these are virtues and teachings that are not absolute and admit of some limits.

And much the same could be said of economic policies that admit of different views wherein reason people will differ. The key element to be sought is just system that rewards hard work and does not unjustly exclude or favor.

But all this illustrates a problem at the intersection of Catholic moral teaching and politics. The non-negotiable issues are largely listed on one party’s platform and the negotiable (in terms of their details and applications) are listed on the competing party’s platform.

Here too, this is not the fault of the Catholic Church, or of any faithful Catholic, lay or clerical. Our moral teaching remains ours wherever the political lines fall. And moral teaching does and has always ranked certain moral issues as more critical or clear than others. This is often due to their exceptionless quality (you don’t just sort of have an abortion or support it), and also to the immediate, intentional and unambiguous harm they do to individuals and to the moral law.

On the eve of an election and as a priest I frequently am baited to comment more directly on politics by naming names, and parties. I will not do so. The temporal order belongs to the laity, not the clergy. But as a priest I must convey the moral teachings and insist that Catholics connect the dots when it comes to voting. And my advice is simple: Vote as a Catholic, not as a Republican, Democrat, conservative, or liberal. Vote as a Catholic with a Catholic moral vision.

It is a simple fact, beyond the control of the Church, or of any individual and faithful Catholic, that most politicians of a certain party support the right of others to kill pre-born children. This is a heinous crime and cannot be papered over by jargonistic terminology or overlooked by moral equivocations such as “Well, he is right on the other issues.”  Would the excuse that “he is right on the other issues” hold if the word abortion were replaced by genocide or slavery? Abortion is not an abstraction. It is a horrifying reality whose death toll has reached over 50 million in this country alone.

Proverbs 24 says, Rescue those who are being led off to death; hold back those who are being carried to slaughter. And if you say, “Behold, we did not know this,” does not he who weighs the heart perceive you? Does not he who keeps watch over your soul know it, and will he not repay man according to his work? (Prov 24:11-14) If we do not oppose this moral evil, we are part of the problem and God will judge us.

The same holds for euthanasia, embryonic stem cell research, and same-sex “marriage.” We cannot remain silent, let alone honor and promote those who hold these views. Do not neglect the other moral issues — but these non-negotiables, for the reasons stated and due to their deadly quality and/or the severe moral harm they cause, must be our first concern.

In rare cases, the situation exists where no candidates with a Catholic moral vision on these most critical issues exists, or where difficult decisions related to several non-negotiable issues run into complex cross-currents (e.g. a candidate who is pro-life but also supports euthanasia or same-sex “marriage”). Indeed, there may be certain elections, national or local, where the best a Catholic can do is limit the damage. But the point must always be to do the best we can to advance the Kingdom of God and its values.

I fully expect certain comments to emerge here that dismiss this article and the view it expresses as merely political. I once again vigorously dispute such a claim for the reasons stated. Neither I, nor the Catholic Church, nor any individual Catholic created the political climate of today, wherein one political party rejects the most crucial Catholic moral teachings. We have not changed; the world and its politics has. We will not, we cannot, be silenced by false accusations and a distorted political environment.

Did I mention that Satan is no idiot? He has successfully convinced most Catholics and most Americans that moral issues are political issues. In so doing he has, with our human sinful connivance, managed to divide Catholics and others so that we fight each other rather than moral evil.

I say to every American, that we must come to our senses and stop peddling death through abortion, euthanasia and embryonic stem cell research. The culture of death must end. Stop redefining sexuality and marriage and all other sins against the family and the body such as fornication, adultery, contraception, and homosexual acts. No candidate for office should be thought fit or deserve our vote who supports such deadly and confused practices. It is also true that we must find ways to welcome the immigrant, ensure economic fairness, and care for our poor more effectively. But in these matters there will be legitimate differences as to how best to accomplish such goals.

To all Catholics I say, be Catholic. Vote as a Catholic with a Catholic moral vision. Advance the Kingdom of God.

Reprinted with the author's permission from the National Catholic Register.