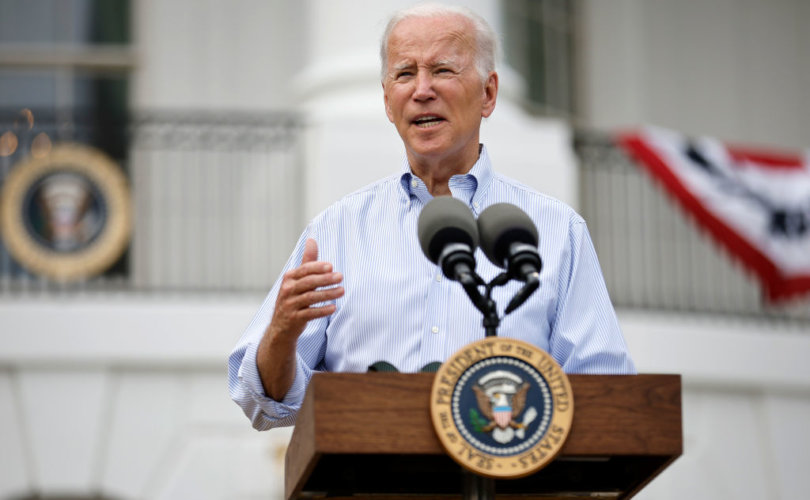 Note from LifeSiteNews president Steve Jalsevac: This article posts a wise warning about the U.S. November elections. It is going to be a major battle to ensure an honest election. We have to all be proactive and assume the worst from the Democrats and RINOs.

(WND News Center) – We’ve been told for a year now, maybe more, that a Republican “wave” election is coming in 2022.

Yes, a great midterm red wave will wash ashore and clear the beach of blue-stained sand. We on the right are so excited at this prospect.

But to all who are so excited, I advise you to temper your enthusiasm. This is far from in the bag. We still have a two-front battle on our hands.

First, we must shore up our side. You, me, everyone on the right must be careful of whom we support. The time for the endorsement of RINOs because “they can win” must come to an end. And ditto to the spineless Republicans who only act conservative during an election year.

We need constitutionalists. We need black-and-white conservatives. Enough with the gray-pastel, reasonable Republicans who plant themselves somewhere between conservative and leftist. We need representatives who are willing to fight, not compromise.

And why? Well, that leads us into our second battlefront.

We’re heading into uncharted territory against an enemy we have not previously encountered.

When I say enemy, I don’t mean opponent. I didn’t misspeak. I mean exactly what I wrote – ENEMY. This enemy is the current Democratic apparatus – the most corrupt administration in our nation’s history, one that has already eclipsed the previous worst administration, that of Woodrow Wilson.

They don’t care about you or me – they hate this nation as it was founded and hate what it has stood for. The rule of law is an annoyance to them, and our founding documents – the Constitution, Bill of Rights and Declaration of Independence – are barnacles that must be scraped off the good ship Globalist Utopia.

But still, other than a few, like (shadow co-president) Brian Deese, most leftists prefer to work behind the scenes, knowing full well that they are safe there, that the “press” will not cover what they’re up to. They may cover it up, but they won’t shine a light on it.

There are, however, some in the independent media that will spotlight this out-of-control administration. One of them is Mollie Hemingway, editor in chief of The Federalist. She is an actual journalist.

It’s Hemingway’s piece from June 23 and seeing her interview with Glenn Beck that give me pause regarding a red wave this November.

According to Ms. Hemingway, we should be concerned. It appears the Biden administration will do almost anything to prevent a Republican victory this year.

Just 45 days after his inauguration, Biden was handed Executive Order 14019 to sign. The order demands that all 600 federal departments and agencies “expand citizens’ opportunities to register to vote and to obtain information about and participate in, the electoral process.”

And second – the federal government has almost zero roll in elections. It’s each individual state’s job to run the election how they see fit. So once again, this administration is acting unconstitutionally.

Per the Constitution, the Executive branch has exactly zero roll in elections, and the Congress has very little beyond, “the Time of chusing the Electors, and the Day on which they shall give their votes. …” That’s about it!

However, that doesn’t matter to this bunch of radicals. These agencies apparently submitted the plans to Susan Rice (the other shadow co-president) for her personal approval.

All of these plans are a well-guarded secret, and congressional demands, FOIA requests and lawsuits have yet to be able to pry them from Rice’s hands. Transparency is not a concern with this administration.

However, there have been a relative few departments that have announced their plans.

The Department of Education will take federal work training funds for get-out-the-leftist-vote campaigns. Lost your job? Need to be retrained? Too bad.

And the Department of Agriculture will use money they’ll take from child nutrition programs for their get-out-the-vote drives. Hungry kid? Can’t afford lunch? Sucks to be you.

These are just a few, but I think it’s safe to say that every department and agency will likely drop what they are supposed to be doing for Americans and instead concentrate on what’s really important – getting Democrats elected.

Short of a banana republic or communist dictatorship, have we ever seen a more corrupt administration? I’m thinking not.

So don’t sleep on this next election. It ISN’T in the bag!