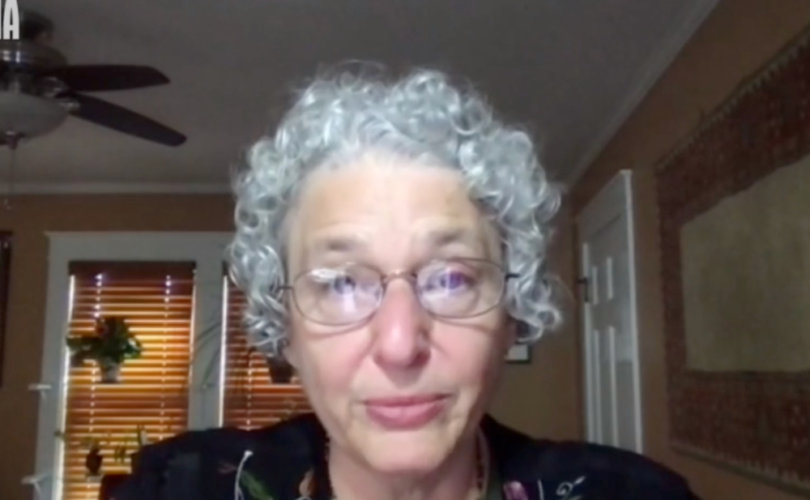 (Children’s Health Defense) – The Maine Board of Licensure in Medicine on October 25 resumed its hearing on the suspension of Dr. Meryl Nass, focusing during this second session on accusations of “sloppy” record-keeping.

The board suspended Nass, a scientific advisory board member of Children’s Health Defense (CHD), on January 12 without a hearing, on accusations of “unprofessional” and “disruptive” behavior, spreading “misinformation” and prescribing hydroxychloroquine and a “deworming medication” (ivermectin) to patients.

The accusations of “misinformation” against Nass – an outspoken critic of government COVID-19 policies and restrictions – were withdrawn September 26, just prior to her first hearing, held on October 11.

With no patient complaints against Nass, the board is now resting its prosecution on the prescribing of hydroxychloroquine, ivermectin, and on the alleged record-keeping issues, which Nass said are well within the standard of care.

In interviews with The Defender, Nass and one of her attorneys, Gene Libby, discussed the October 25 hearing, the progress of her case up to this point, and her next steps.

‘I’m not even sure exactly what the charges are’

According to Libby, “the hearing on October 25 went very well. Dr. Nass made a very convincing presentation on the use of ivermectin and hydroxychloroquine to treat patients.”

“[Nass] established that the FDA and the CDC had conducted a deliberate campaign to suppress availability of those drugs so people would turn to vaccines instead of the alternative treatments those medicines provide,” Libby added.

“We established that there is no rule or law against off-label use of those medications,” said Libby, “which have been proven safe and effective for decades.”

Libby also referred to testimony provided by a witness, Dr. Thomas Courtney of the Maine Medical Center, on behalf of the board. According to Libby, “Dr. Courtney testified about the FDA’s removal of the Emergency Use Authorization for hydroxychloroquine.”

This revocation, however, has “no legal impact on Dr. Nass’s ability to prescribe hydroxychloroquine to her patients,” said Libby.

Describing the board hearings as a “kind of Kafkaesque trial,” Nass told The Defender “I’m not even sure exactly what the charges are because they removed about half the charges and many of the grounds.”

Nass explained that when the charges of “misinformation” against her were still active, “They never said specifically what was misinformation, what was the true information, and what did I say that was incorrect? They’ve never been willing to put that on paper.”

Now the board is acting in a similar manner regarding its accusations that her record-keeping was “sloppy.” Nass said:

They’re never willing to say, what are my records missing? What’s wrong with my records? What is the standard by which these records can legally be judged? They haven’t specified any of that.

So, you know, in my view, it’s a kangaroo court.

For Nass, these are signs that the board’s case against her is weak and its members are grasping at straws in an effort to justify their arbitrary suspension of her license for the past nine months.

“I think they’re trying to find something within the shards of this case that could potentially justify the fact that they immediately suspended my license,” Nass said, “since I did not meet any of the listed criteria that Maine law requires to enable the board to immediately suspend my license.”

These “shards” appear to be centered around her allegedly sloppy record-keeping. Nass told The Defender:

And so we’re still trying to figure out exactly what they think they have beyond the fact that they say my records were sloppy, because they haven’t said that the records are missing anything.

They don’t want to argue their original claim, which was that I was prescribing them off-label without a specific approval or authorization by the FDA [U.S. Food and Drug Administration] because the board members learned subsequently that it was perfectly legal to do so, that you did not need a specific authorization or approval by the FDA.

Nass said the real punishment appears to be the process itself:

So they used… the greatest punishment they had at their disposal against me for essentially doing nothing that actually broke any laws, rules, or regulations. And as best I can tell, the board staff dreamed this prosecution up before the board members had a meeting about me.

They drew up a list of charges against me, which were basically just quotes from interviews that I had given without ever specifying what I said was wrong in these quotes, but just listed these quotes as if anyone could just look at them and see how ridiculous they were, although they all turned out to be accurate.

This is significant, Nass said, because her January 2022 suspension was premised upon these original charges that have since been dropped. Yet, her suspension remains in effect.

“Our attitude is, the original complaints may have been withdrawn, but those are the reasons I was suspended,” she said. “And the board can’t just walk away from them because they made a mistake.”

Between October and December 2021, four complaints were submitted to the board against Nass. Two came from strangers regarding “misinformation” they saw on the internet, one came from a physician regarding prescribing a “deworming medication” (ivermectin) and one was from a midwife regarding her prescribing hydroxychloroquine.

All you needed was the fact that the drug already had a license indicating that it was reasonably safe to use and that doctors are able to prescribe any licensed drugs off-label, and 20 percent to 40 percent of prescriptions written in the United States every day are for off-label uses.

Nevertheless, it was on the basis of these accusations that the board ordered Nass’ license immediately suspended in January 2022. Nass told The Defender she questioned the legal prowess of the board members and its legal advisers.

The board members, they’re not legal eagles. They don’t seem to have a sense of how what they’re doing is supposed to be grounded in the law. And the three lawyers on the board staff don’t seem to be advising them very well.

I feel as if this case is giving the board members a crash course in Maine’s medical regulation laws and the fact that there is no carte blanche for the board to ignore the law nor to create new law.

Board still trying to make Nass undergo a neuropsychological evaluation

At the time of her suspension, the board also ordered a neuropsychological evaluation, implying that Nass was mentally impaired or a substance abuser and incompetent to practice medicine.

This was merely an attempt by the board to justify its decision to immediately suspend her, Nass said.

Nevertheless, according to Nass, the board, on October 25, continued its efforts to get her to submit to a neuropsychological evaluation. She told The Defender:

They… voted at the beginning of day two of the hearing to continue the immediate suspension and to continue demanding a neuropsychological exam, presumably in the hopes that their own doctor would be able to come up with some diagnosis for them that would justify their illegal actions from the start in suspending me.

When you immediately suspend someone, all the documentary evidence in the case is no longer confidential. The board’s executive director, Dennis Smith, then shared the records with the media and sent a black mark to the National Practitioner Databank, which means, basically, I can never get a state license or be hired as a doctor again. That black mark can never be fully expunged. So, without any attempt to claim I had broken a single rule, regulation, or law, the Maine Medical Board applied the harshest punishment it had to me.

Clearly, the board expected me to roll over, because the cost of defending oneself against a board is hundreds of thousands of dollars. The board and staff had made the cynical calculation that at age 70 I would not spend that much to challenge them. In fact, the board demanded a financial statement and four years of tax returns! But I am not legally obliged to provide them a wallet biopsy and did not comply.

Nass’ legal counsel moved to have all the charges against her dismissed and to compel the board to apologize for their unfounded case against her.

However, for now at least, the hearing process against Nass continues. Although two meetings have already taken place – on October 11 and October 25 – Nass said, “We think it will take about five days in total,” with the third hearing date not scheduled until January 31, 2023, after the cancellation of the November hearing date.

Libby told The Defender the board meets only once per month and “has not prioritized the case as it should” so that Nass’s license can quickly be reinstated.

During the third hearing, the board will hear witness testimony from both sides. Libby told The Defender that Dr. Thomas Courtney, the board’s October 25 witness, will be cross-examined at that time, along with another board witness, Dr. Jeremy Faust of Brigham & Women’s Hospital in Boston.

The board has two ‘expert’ witnesses. One is a local infectious disease doctor and one is an ER doctor.

And both of them, so far, have been happy to allege that I’m a terrible doctor and should have my license immediately suspended and never practice again.

Nass said that, in turn, five witnesses and three of her COVID-19 patients will be brought in to testify on her behalf. She said:

Drs. Robert Malone, Paul Marik, Harvey Risch, and Steven Katsis will talk about the use of these drugs, the issues of misinformation regarding the vaccine – if they let us.

They will also talk about record-keeping standards. And Steven [Katsis], who is the vice chair of the Oklahoma Medical Board, will testify that this is a witch hunt and that the purpose of the board is to protect patients, not to carry out political agendas.

Nass, however, is not confident the board will reach an objective or impartial decision in her case. Nass said:

These members of the board are the jury, basically. So these people who already voted unanimously to… immediately suspend my license because I was such a terrible danger to the people of Maine, they’re the ones who are going to vote again to say whether they made a mistake the first time.

So they, at this point in time, show no evidence that they want to change their mind. Even their prosecutor, the assistant attorney general, seemed to be unfamiliar with the laws, rules, and regulations.

According to Nass, information that she and her legal team received following a Freedom of Information Act request indicated there may have been pressure on the board from high-ranking Maine political officials to move forward with the case against her after Nass and other doctors briefed Republican members of the legislature about the illegal suppression of ivermectin and hydroxychloroquine by state officials.

These figures include “members of the legislature… the speaker of the House and other prominent Democrats, including the governor’s staff ” said Nass, who added that “one of the Democratic legislators dug up ‘dirt’ on some of us and circulated it to try to discredit what we had said [to state legislators].”

Nass told The Defender she and her team may take legal action individually against the board members, in their personal capacities.

“So, I think we have established everything we wanted to establish in the record, and I look forward to a future fair trial.”

She added, “Except next time, I’ll be the plaintiff, and the board members and staff will be the defendants.”

Nass’ attorneys described the October 11 hearing as “an abuse of regulatory process.”

“The Board’s attempts to censor physicians like Nass have no role in medicine or science; they present a grave danger to the health and human rights of all Americans,” said Mary Holland, CHD president and general counsel.

You can read two of the board’s recent notices withdrawing various complaints (second and third notices), Nass’ opening statement to the board, and the defense counsel’s timeline of events that led to her suspension.