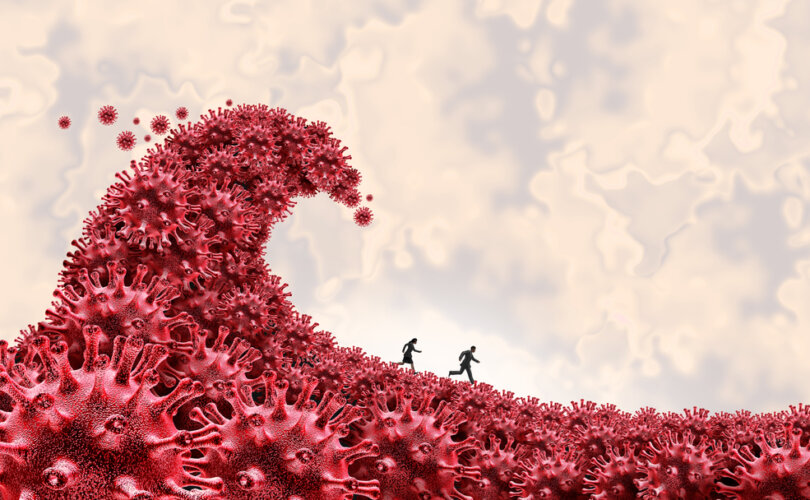 (Courageous Discourse) – Last night at dinner, Dr. McCullough told me about a drug designed to regenerate bone marrow after it has been damaged by nuclear radiation. During the clinical trials, monkeys were exposed to severe radiation and then injected with the agent, that did, in fact, help to regenerate their bone marrow. The manufacturer developed the drug in collaboration with the Department of Defense.

In the event of a nuclear war, the plan was to distribute the agent to the population outside of the blast radii – i.e., those far enough away from the detonation of Russia’s approximately 1,500 deployed strategic nuclear weapons. The warhead size of these missiles ranges from around 500 kilotons to its Sarmat-2 (Satan) intercontinental ballistic missile, equipped with ten warheads ranging from 18–25 megatons (million tons of TNT). For comparison, the nuclear bombs dropped on Hiroshima and Nagasaki were approximate 15 kilotons (thousand tons of TNT).

The dinner conversation turned to nuclear war because I’d just finished watching Joe Rogan’s interview with Tulsi Gabbard in which he played a New York Public Service Announcement (PSA), informing the public what to do in the event of a nuclear attack. Gabbard and Rogan review this announcement starting at 5:35 on the tape.

This PSA strikes me as the most insane artifact ever produced by the mind of man. As I watched it, I wondered if the American people have (for some strange reason) lost their grasp of the probable outcome of a nuclear war.

Last night I had a nightmare in which my mother and I were driving in the countryside, somewhere north of Dallas, seeking a “distribution center” at which we could receive injections of the agent for regenerating our bone marrow. Both of us were dying from radiation sickness. In my dream I knew it was an Apocalyptic Fool’s Errand, and that we’d have been far better off dying in one of the blasts.

Almost all of our critical infrastructure – and the manpower to repair it – had been destroyed. There was no readily available clean water or food supply. The entirety of both the power and fuel grids had been taken out and we were burning our last tank of gas. Most of our police personnel had been killed, and dangerous, desperate people were already roaming about, seeking prey like us.

At this point, I think it’s pretty clear to everyone that the U.S. government’s proxy war in Ukraine has placed the American people at a significantly elevated risk of nuclear attack – perhaps even higher than it was during the Cuban Missile Crisis. What astonishes and baffles me is that – judging by my own social interactions – the same people who were utterly terrified of COVID-19 seem strangely cavalier about the prospect of nuclear war.

An old friend in Vienna – one who vigorously defended his country’s draconian lockdown and mandatory vaccine policies – told me he was “ready to lose everything” for the territorial integrity of Ukraine. I started to ask him if his three children had any say in the matter, but then thought better of it. Another friend at a recent cocktail party – one who’d insisted that his 16-year-old (star soccer player) son receive COVID-19 injections – spoke of exchanging tactical (battlefield) nukes with Russia with astonishing sang-froid.

My older brother was a film student, and when we were teenagers he frequently talked about the films of Stanley Kubrick. His favorites were “Paths of Glory” (about the First World War) and “Dr. Strangelove,” about a nuclear war that ensues when U.S. Air Force General Jack Ripper decides that “total nuclear commitment” is preferable to the risk of allowing the Russians “to infiltrate our precious bodily essences” with fluoridation of the public water supply.

The first time I watched “Dr. Strangelove,” I thought it was pure black comedy. In recent years I’ve come to appreciate that Kubrick was saying something profound and deadly serious about our human species. Under certain circumstances, we embark on a destructive path, and as we gather momentum, we find ourselves unable to throw on the brakes. In such a state, the voice of reason becomes mute, and we hasten to our destruction.

We now know that during the Cuban Missile Crisis, young President John F. Kennedy and his brother Robert kept remarkably cool heads at a time when our military establishment was ready to start slinging tactical nukes. Ultimately, they struck a back door deal with Khrushchev to remove the Soviet missiles from Cuba in exchange for the U.S. removing ours from Turkey. Something like this deal is apparently what Henry Kissinger had in mind when he recently stated, “Some dialogue, maybe on an unofficial level, maybe in an exploratory way is very important, further emphasizing that ‘in the nuclear environment’ such an outcome is preferable to a ‘battlefield decision.’”

His remarks immediately triggered a storm of criticism within our “Permanent Washington Establishment” and its media lackeys, who characterized his recommendation as “immoral realpolitik.” Students of Cold War history (what few of us remain) note that the entire point of possessing nuclear weapons is to force the enemy to compromise and negotiate, because no one can win a nuclear exchange.

Apparently the people now running our country (whoever they are) believe they possess a clearer understanding of such matters. Their recent performances in Afghanistan, Iraq, Libya, and Syria give me little confidence or hope.

Reprinted with permission from Courageous Discourse.