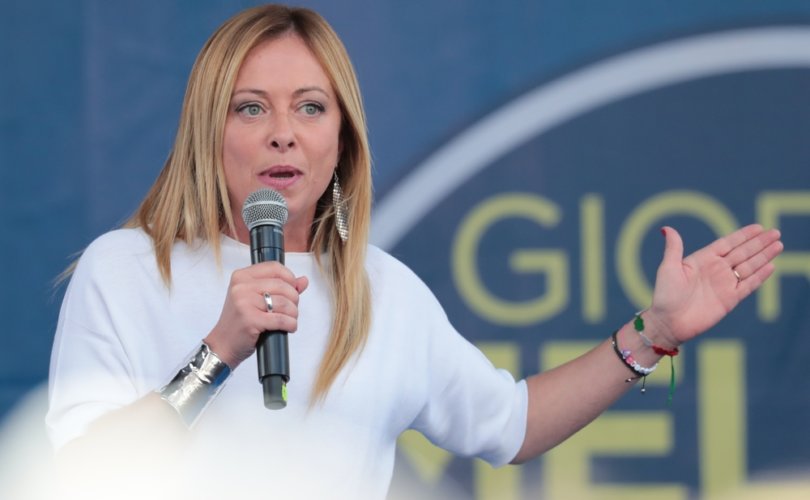 (Robert Malone) – The video below is of a fantastic speech that was given by new (incoming) Italian prime minister Giorgia Meloni to the World Congress of Families in 2019.

In my opinion, the importance of this speech is that it really puts the lie to the mainstream media storyline that Meloni and her Brothers of Italy (Fratelli d’Italia) are fascists. The words I am speaking in the video are an English translation of her words, and although I endorse many aspects of her platform, the views being presented are not necessarily mine. In particular, I agree with many of the points which she made (particularly about personal responsibility as well as the importance of family and children), but not all.

Once again, as we have seen in so many other situations, the corporate media has pushed a reactive narrative regarding Meloni and Brothers of Italy which is quite twisted, and does not represent the actual reality of their political position. This recent hyperventilation from The Atlantic is typical, titled “The Return of Fascism in Italy.”

In the speech highlighted here, Meloni is demonstrating the oratorial skill of a seasoned Italian politician (which she absolutely is). The backstory to this truth is that she is operating within a very constrained “Overton window” of political speech, in which she is unable to deviate from the established reality of Italy now having become a sort of vassal state (economically speaking) to the EU overlords in Brussels.

In many ways, her positions are very consistent with the many Catholics who are not aligned with the current Pope. As many have noted, her only political freedom to differentiate herself and her party from other Italian political parties involves the cultural positions which she takes.

Italy is completely financially dependent on Brussels now, which in large part demonstrates the consequences of a nation state loosing control of its own currency.

A more realistic and nuanced, less stereotyped analysis of the political reality within which Giorgia Meloni and the Brothers of Italy operate can be found in this article by Thomas Fazi, published in the UK-based online journal “UnHerd” entitled Giorgia Meloni is no radical: Italian voters know she won’t change anything. Bottom line: if there is Fascism going on here, it is based in Brussels with the EU leadership, not in Rome with Meloni and the Brothers of Italy.

Meloni’s pro-establishment approach to economic policy isn’t just due to a lack of imagination on her behalf, though she’s always held rather mainstream views on the matter. It’s first and foremost due to the fact that she’s fully aware that Italy, by virtue of its adherence to the single currency, is no longer a sovereign country, and that therefore she needs the support of the EU establishment to stay in power. She has, in effect, learned the lesson of the 2018 “populist” Five Star-Lega government, when the European authorities resorted to a wide array of tools — including financial and political pressure — to crush any attempts to deviate from the status quo.

During a recent talk at Princeton University, EU Commission president, Ursula von der Leyen, spelt out this concept. When asked if she was concerned about the upcoming election in Italy, she replied: “If things go in ‘a difficult direction,’ we have tools [to deal with the situation].” In doing so, she revealed just how the EU’s ruling elites view member states: not as sovereign countries but as protectorates.

Meloni understands this. A good number of Italians, however, also understand this, and share the financial market’s assessment: Italian democracy has become so constrained it no longer matters who wins the elections. For far away from the screeching headlines, the most striking aspect of the election was, in fact, the poor turnout — 64%, the lowest in Italy’s history. This means a third of Italians sat them out; they have given up on democracy. This number is only bound to grow — a devastating indictment of the manner in which the EU has hollowed out Italian democracy.

There is a strong warning here to all of us, embedded within this unfortunate current Italian reality, concerning the consequences of migrating to a centralized bank digital currency (CBDC).

Just as Italy has lost its political autonomy and operational flexibility to the EU and Brussels as a consequence of exchanging Lire for Euros, any autonomous nation state which buys into the proposed CBDC system managed by the Bank for International Settlements (BIS) will be ceding its sovereignty to the BIS and the individuals, interests, agendas and organizations which the BIS represents. If you care about freedom and sovereignty, just say no to CBDC. Learn from the box which the Italians find themselves within.

If you take the time to listen to Italians and others that are tuned into the ground truth, there are many different perspectives regarding Meloni and the Brothers of Italy, but (unlike the global corporate media) I have not heard any who really understand the situation claiming that this is actually a Fascist organization. I suggest that this moniker represents yet another case of corporate media re-defining the meaning of words to support a political agenda. Once again, I harken back to the definition of Fascism which (correctly or incorrectly) has been attributed to Benito Mussolini: “Fascism should more appropriately be called Corporatism, because it is a merger of state and corporate power.”

Steve Bannon has worked with Giorgia Meloni for over five years, and this is his point of view on her:

a leader of enormous vitality and grit — abandoned by her father she forged through a brutal Italian political jungle to now lead her country as first female PM.

A close friend of mine who lives in Rome (which is Meloni’s base) and is very embedded in current Italian politics has a different, more jaded point of view which is more aligned with Thomas Fazi’s reporting in UnHerd:

Meloni has been in the political game for so long – she’s voted for all mandates And for green pass and mandates but as elections approached she erased all of her tweets/posts and started promoting “free choice” – she is not trusted. She was part of the ASPEN INSTITUTE” [funded by the Bill and Melinda Gates Foundation and George Soros Open Society Institute.]

The video and voice over provided above is from a speech which Meloni provided to The 13th World Congress of Families (Congresso Mondiale delle Famiglie), which was held in Verona from the 29-31st March 2019. The congress promotes conservative Christian family values. This event was enormously controversial in Italy, and attracted 20,000 protesters to the city. The protesters said the Congress was homophobic and wanted to restrict women’s freedom, keep them at home doing the ironing, take Italy back to the middle ages. These criticisms were addressed at length by Meloni in the speech.