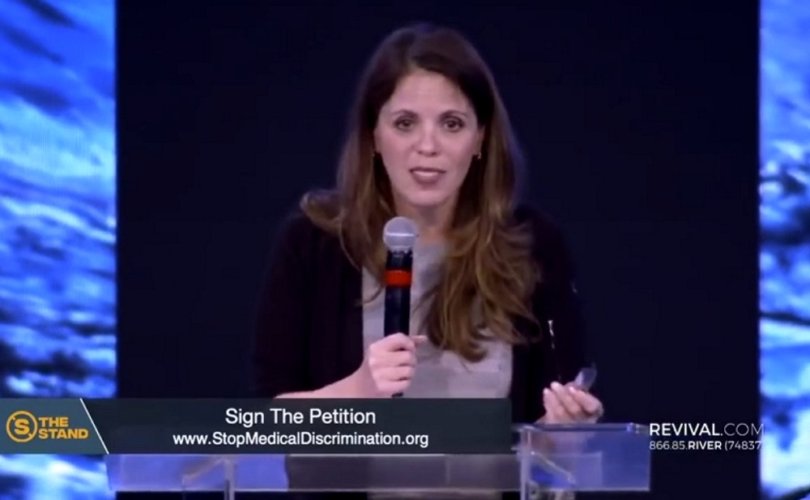 Note from LifeSiteNews president Steve Jalsevac: LifeSite is shocked at the unrestrained bias, the totally inappropriate and even false comments of the judge who presided over Dr. Gold’s sentencing, after she merely, peacefully exercised her First Amendment rights on Jan. 6. Rather than harangue Dr. Gold with his abusive comments Judge Christopher R. Cooper should have instead at least taken a neutral position on this case or even called into question the severity of charges laid against this outstanding American citizen and medical and legal professional and also asked the FBI to justify the extraordinary and unnecessarily threatening manner in which it arrested Dr. Gold at her residence.

Dr. Gold was charged with Title 18 U.S.C. §1752(a)(1), which is a misdemeanor charge of “Entering and Remaining in a Restricted building or Grounds.” Information about Dr. Gold’s previously scheduled speaking engagement at a rally on Capitol grounds with a government approved permit, and her entirely peaceful attempts to deliver that speech amidst a crowd that was badgered and then ushered into the Capitol building through doors opened from the inside by Capitol Police, is detailed here.

She was also charged with several other counts, all of which were factually false. She accepted a plea deal to this single misdemeanor in March. Please watch Capitol Punishment to learn the true story of January 6.

At the sentencing hearing, Dr. Gold’s attorneys emphasized her non-violent, reasonable behavior, and lack of any criminal record, and requested she provide community medical service instead of serving a prison term. They also argued the extensive psychological trauma she endured as over a dozen law enforcement agents armed with assault rifles broke her door and arrested her inside her home, and the two days she spent in jail, should preclude her from further, unwarranted punishment.

However, the judge disregarded this and proceeded to falsely state that five people died on January 6(a commonly perpetuated media lie), that her presence at the Capitol had no relevance to the exercise of and advocacy for the First Amendment, that her charges and all associated attacks and harms against her do not constitute any form of political persecution, and that he was personally offended that millions of American citizens freely chose to financially support her political positions in defending medical choice and freedom of speech—and then used all of these false and inappropriate accusations to justify a disturbingly vindictive sentence.

READ: Dr. Simone Gold remains committed to medical freedom despite being a victim of ‘selective prosecution’

In addition to the trauma she endured surrounding the January 6 event and her subsequent violent arrest, Dr. Gold continues to be tormented to this day. Before January 6, she was fired from her job as an emergency room physician in California simply because she saved patients’ lives during the COVID scare by prescribing them safe, FDA-approved medicines. She later exposed mandatory, non-FDA approved, experimental mRNA injections as an unconstitutional government overreach—especially in light of the fact that older, scientifically proven medicines are more effective and less dangerous. She rightfully spoke openly about this.

However, the Medical Board of California is now attempting to punish her by revoking her medical license entirely due to her 1st Amendment-protected free speech. The head of the California Medical Board, Kristina Lawson, went so far as to submit a histrionic letter about Dr. Gold in order to prejudice the judge and negatively impact her sentencing. While he stated Ms. Lawson’s letter would not be used in his determinations on sentencing, the judge made no attempt to hide his bias.

Strangely, Judge Cooper also seemed unusually fixated on monies raised by Dr. Gold for AFLDS, which is a 501(c)(3) non-profit organization that seeks to educate the public on constitutional rights and provides access to uncensored medical facts, news, and third-party telemedicine services. AFLDS is legitimately financed by voluntary member donations.

Judge Cooper went so far as to falsely accuse Dr. Gold of using her arrest as an excuse to obtain personal funds, stating, “I find it unseemly that your organization is raising hundreds of thousands of dollars for its operations, including your salary.” It should be noted Dr. Gold voluntarily paid for her legal expenses entirely out of her own pocket, as attested by her attorney, Dickson J. Young.

Ironically, Judge Cooper self-righteously (albeit incorrectly) chastised Dr. Gold for raising money for her personal legal defense. At the same time, he blatantly disregarded the fact that Dr. Gold’s 60-day incarceration in a federal prison will cost the taxpayers! If Dr. Gold had been allowed to serve her sentence through public service by providing free medical care to sick and financially challenged people, she would have served her sentence (and the public) at no cost to the taxpayers.

Dr. Gold is not an extremist or criminal as the mainstream media disingenuously portrays her. She’s the target of a prosecutorial witch-hunt; prey to American mid-century McCarthyism. Dr. Gold has maliciously been tagged a “threat” by homeland security and placed on a no-fly list, and then later placed on an extremely invasive security screening watchlist which makes her charitable work travels nearly impossible. After everything she had endured in California, Dr. Gold relocated to Florida—only to find the FBI falsely reported her trespass misdemeanor as a charge of treason.

— Article continues below Petition —
PETITION CONGRESS: Stop the grooming & sexualization of children in schools
Show Petition Text
6466 have signed the petition.
Let's get to 7500!
Thank you for signing this petition!
Add your signature:
Show Petition Text

In essence, Dr. Gold has become an American political prisoner. She has been threatened and harassed by the government and medical boards for taking a stand against tyranny and educating the public about the illusions of “safe and effective” COVID-19 injection propaganda, which the media shamefully shills.

AFLDS considers Dr. Gold’s sentence to be wildly inappropriate and totally disproportionate to the charge brought against her—a charge resulting from a chaotic incident clearly facilitated by the government, grossly misportrayed by the media, and weaponized by both in ain a concerted attack against their political resistance. Any further attempts made to silence Dr. Gold or AFLDS will not be tolerated.

The 1st Amendment protects our right to free speech. AFLDS will continue its unwavering support of Dr. Gold and will continue to empower We The People with uncensored information that will enable them to resist unconstitutional mandates which are only the beginning of the government’s plan to take total control of its citizens and their children, whom they have now begun to target in earnest.

Despite the unrelenting and biased reports in the mainstream media smearing Dr. Gold, the American people are awakening to the false COVID-19 narrative ramrodded by corrupted corporate channels. AFLDS will not only continue to survive but expand as more and more Americans wake up to the insidious lies propagated by government and media outlets.

When someone with the medical expertise and academic pedigree of Dr. Gold speaks the truth and is attacked in such a vengeful and extreme manner, we must all stop and ask ourselves what is it that the government needs to hide so much that they will publicly ruin a physician, mother, and law-abiding citizen’s life in order to silence her?

If they can attack someone like Dr. Gold, to what extent will the government resort to silencing other Americans who exercises their constitutional right to lawfully resist tyranny? Notwithstanding Dr. Gold’s illegitimate sentencing, Americans should take heed and actively continue to resist unconstitutional mandates, especially if we are to remain a free and open society.

America’s Frontline Doctors is the nation’s premier civil liberties organization. Our mission is to provide We The People with independent information from the world’s top experts in medicine and law so you can be empowered with facts to protect your rights, take care of your health, and secure your future. Learn more at