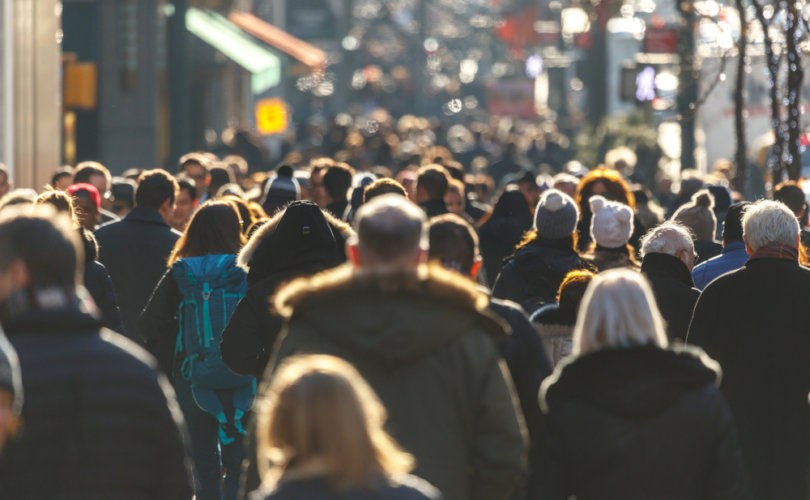 Oct. 1, 2013 (PRI) – We are contacted all the time by people asking for how they can refute the arguments of those who believe that the world is overpopulated. So we have decided to create a short primer called “How to Debunk the Myth of Overpopulation in Three Easy Steps.”

Before we start, however, let’s define overpopulation. Overpopulation describes a situation where the number of people exhausts the resources in a closed environment such that it can no longer support that population.

Let’s imagine that our PRI offices were to suddenly become a closed environment, with nothing allowed in our out. Obviously, I and my colleagues would exhaust the available resources very quickly: The water cooler would be drained dry, the refrigerator would be emptied out, and the oxygen would be all used up.

Obviously, my office has too many people for its natural resources, but I haven’t started trying to eliminate my co-workers to ensure my own survival.  I haven’t launched a sterilization campaign against my younger colleagues or encouraged my older colleagues to jump out of the windows.  Why?

Well, of course I am constrained by Catholic moral teaching.  But aside from that, I know that my office is not a closed environment. Neither are most instances cited by overpopulation zealots, such as crowded cities or poor countries.  None of these are closed environments.

Other instances of phony overpopulation occur when humans create artificially closed environments. If someone locked me in my office, most people wouldn’t blame my resulting demise on “the overpopulation of the office” but on the cruel person who locked me in. Similarly, if government policies prevent food from being transported to where it is needed, or distributed to those who are hungry, “overpopulation” is not to blame.  It’s the policy, stupid.

In addition, overpopulation is defined as a problem created by the numbers of people, not their behaviors.  If every person demanded his or her own continent or island, the world would seem “overpopulated” very quickly.

Let’s keep these things in mind as we consider the argument that the earth, as a closed environment, is overpopulated. Is Spaceship Earth (as they like to call it), running out of resources? Let’s evaluate:

1) “Food: there isn’t enough!” Since the time of Thomas Malthus, who lived in the early 1800s, doomsayers have gloomily predicted that mankind would outbreed its food supply, resulting in catastrophic famines.  Yet the world currently produces enough food to feed 10 billion people, and there are only 7 billion of us. That is, with 7 billion human minds at work, we produce enough food for 10 billion human bodies.[1] Imagine how much food we can produce with 10 billion minds!

“But there are still hungry people in the world!” Yes, hunger remains a problem in some parts of the world, but it is not caused by the number of people. Commenting on the recent Somali famine, Oxfam, an international humanitarian organization, stated, “Famines are not natural phenomena, they are catastrophic political failures.”

“Well, we got lucky with the Green Revolution, and food production shot up, but we can’t count on something like that to occur again!” Why not? There is no reason to think that we are running out of human ingenuity.  If anything, a larger population means more opportunities for the kind of scientific collaboration and increased specialization that results in such scientific leaps forward.

“Ok, but humans now eat higher up the food chain that we used to.  We can’t keep that up and still have enough for everyone!”  Sure, people in the developed nations eat more meat, which require much more energy input per calorie eaten than if we ate grains and plant proteins.  But that doesn’t mean that we will run out of food. We are eating higher energy foods because they are relatively cheaper than they used to be—and prices don’t fall when goods are scarce. The falling price of high energy foods indicates that they are becoming more plentiful, not less so.  According to the World Education Service, “world agriculture produces 17% more calories per person today than it did 30 years ago…This is enough to provide everyone in the world with at least 2,720 kilocalories (kcal) per person per day.”

2) “We are running out of water!” The earth is awash in water.  Oceans cover 70 percent of the planet’s surface to an average depth of 6,000 feet.  That’s why the earth looks blue from space.  You cannot use up or destroy water; you can only change its state (from liquid to solid or gas) or contaminate it so that it is undrinkable.

“That’s a great theory, but if I’m thirsty, theory doesn’t mean much to me. There is not enough fresh water for everyone!”  There is! Since 1900, freshwater withdrawals (i.e. production of usable water) have increased much faster than the human population has increased. Freshwater withdrawals have increased seven-fold since 1900 while the world population has increased only four-fold.[2] This suggests our ability to access usable water increases faster than population growth.

“Tell that to the people living in the Sahel!”  You’re correct, lack of water is a serious humanitarian issue. But it is not an overpopulation issue. Water, although plentiful, can be difficult to move to those who need it, hence local water scarcity. As Karen Bakker (2003) states: “Water is one of the heaviest substances mobilized by human beings in their daily search for subsistence….Water is expensive to transport relative to value per unit volume, requiring large-scale capital investments in infrastructure networks which act as an effective barrier.”  In other words, we need more dams, canals, and pipelines, not more abortion, contraception and sterilizations.

Most of this growth will come from developing countries—their life expectancies are expected to shoot up in the next 50 years, contributing to their population growth. Africa’s growth is not something to worry about.

Europe’s decline, however, is something to worry about. A UN report titled “World Population to 2300” paints a picture of Europe’s future if European fertility rates don’t rise above current levels: “The European Union, which has recently expanded to encompass 452-455 million people (according to 2000-2005 figures) would fall by 2300 to only 59 million. About half the countries of Europe would lose 95 per cent or more of their population, and such countries as the Russian Federation and Italy would have only 1 per cent of their population left.”  In other words, the French, German, Italians and British will virtually cease to exist.  Arrivederci, Roma!

– Human knowledge can be passed on through the written and spoken word in ways that evolutionary or biological advantages can’t be.

– Demographers estimate that at least 20 billion people lived on earth between the years 8000 B.C. and 0 A.D. (That’s right, the idea that half of all people who have ever lived are alive currently is a myth!)[4]

– Every man, woman, and child on earth could each have 5 acres of land.[6]

– Every man, woman, and child on earth could each have a half acre of arable land.[*7]

– If we wanted to squeeze close, everyone in the world could stand shoulder-to-shoulder on the island of Zanzibar.[8]

– About 48% of all people live in a country with below-replacement fertility.[9]

– By 2050, Nigeria is projected to have a larger population than the United States.[11]

[3] “WORLD POPULATION TO 2300.” The Department of Economic and Social Affairs of the United Nations (2004): <https://www.un.org/esa/population/publications/longrange2/WorldPop2300final.pdf>

[9]“World Population Prospects the 2012 Revision.” The Department of Economic and Social Affairs of the United Nations (2013):<https://www.unfpa.org/webdav/site/global/shared/documents/news/2013/KEY%20FINDINGS%20WPP2012_FINAL-2.pdf>.