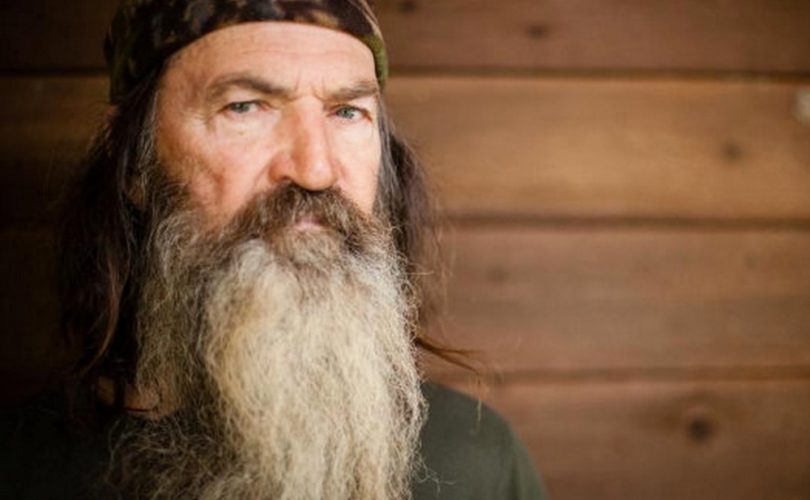 Last week, the winner of the 2015 Citizens United/CPAC Andrew Breitbart Defender of the First Amendment Award was “Duck Commander” Phil Robertson, paterfamilias of the Duck Dynasty Robertson family. In doing so, they were giving Phil the CPAC stage for a speech, knowing that he would speak his unvarnished thoughts. One doubts they expected his topic.

After bringing out his heavily-duct-taped Bible and telling politicians to keep theirs with them, Phil went on the offensive – against sexually transmitted diseases (STDs). He quoted the federal Centers for Disease Control, which estimates that more than 100 million Americans now have a sexually transmitted infection.

Phil’s solution? One older than Christianity, as old as common sense itself. “If you’re disease-free, if she’s disease-free, you marry. You keep your sex right there. You won’t get sick from a sexually-transmitted disease!”

Logic and mathematics would seem to agree. According to Robertson, his goal was to show love to the listeners. But several left-wing websites didn’t see it that way.

“He certainly used his speech to hate very well. I guess that's the criteria. Who can say the sickest, most vile things about center-left Americans wins!” according to John Amato of Crooks & Liars.

The Huffington Post took offense at his attributing the rise in STDs to the beatniks and hippies.

To their credit, MSNBC acknowledged Phil’s numbers, saying, “For the record, Robertson’s [sic] has his numbers correct. A CDC report from February of 2013 estimated more than 110 [million] cases of sexually transmitted infections in America with about 20 billion [sic, MSNBC’s number] new infections each year at a cost of ‘nearly $16 billion in direct medical costs.’”

The network site then blasted him for comparing ISIS to the Nazis, Communists, and Imperial Japanese.

Robertson clearly didn’t care what MSNBC thought, though. “You want a Godly, Biblical, medically safe option? One man, one woman, married, for life,” he said.

“What do you call the 110 million people who have sexually transmitted illnesses?” he continued. “It’s the revenge of the hippies! Sex, drugs, and rock ‘n’ roll have come back to haunt us in a bad way!”

But the big question is – is Phil right or wrong? According to the CDC’s website, “Almost every sexually active person will acquire HPV [Human Papillomavirus] at some point in their lives.”

“Sexually active” would seem to indicate activity with new or multiple partners, rather than this Duck Doctor Phil’s Prescription.

But still – “Almost every…person.” That’s quite a few – the website also says, “about 79 million Americans are currently infected with HPV. About 14 million people become newly infected each year.” While it is the most prevalent venereal disease, HPV is only one of many.

Generally, HPV’s symptoms are more a painful nuisance than life-threatening – genital warts, often only appearing years after the initial infection. But there are also life-threatening illnesses such as cervical cancer, which HPV causes.

Much more frightening, however, is the specter of HIV/AIDS. According to the CDC, there are about 1.2 million people currently living with HIV, and as many as 50,000 new cases a year, with 63 to 66 percent of those being “MSM,” or “Men who have Sex with Men.” Sadly, the lion’s share of new HIV infections is found in the 13-24 age group; despite being 16 percent of the nation’s population, they account for 26 percent of all new infections, with 72 percent of those being young MSM. While HIV is treatable, there is still no cure.

Although HIV, as well as the current increase in syphilis and hepatitis, are primarily targeting homosexual males, heterosexuals with multiple partners are by no means off the hook. As well as HPV, herpes, drug-resistant gonorrhea and chlamydia are on the rise, as well. The year 2013 saw 1.4 million cases of chlamydia and 820,000 new cases of gonorrhea, and the CDC estimates that one person in every six in the U.S. between the ages of 14 and 49 has herpes.

Criticize Phil all you like, folks – he doesn’t mind. He’s only saying this because he cares.

“And if you hate me because I told you that,” he said, “I told you, my love for you is not contingent on how you feel about me. I love you anyway. I don’t want you to see you die early or get sick. I’m trying to help you, for cryin’ out loud! America, if I didn’t care about you, why would I bring this up?”

From this CPAC attendee’s perspective, Phil’s speech was not only important from a physical health perspective, it also, along with that duct-taped Bible of his, reminds us of the words of Charles Spurgeon: “A Bible that’s falling apart usually belongs to someone who isn’t.”

Greg Rohrbough, J.D., has been director of government relations for the Meredith Advocacy Group since 2006.