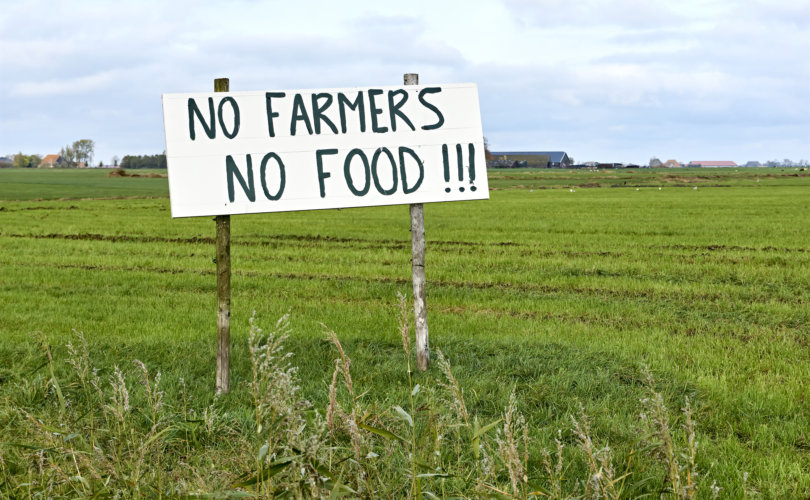 (Conservative Treehouse) – Despite the U.S. media not giving any time, attention, or discussion to the rise of farmer protests in Europe, everyone should pay attention because the same climate change goals being enforced in the European Union (EU) are coming to North America.

The global food manipulators within the World Economic Forum (WEF) have established the farming policy that aligns with their climate change goals. As noted in this Sky News discussion, this is the “Great Reset.”

It’s not just The Netherlands Prime Minister Mark Rutte pushing the agenda, in 2020 Canadian Prime Minister Justin Trudeau gave an identical outline, with an identical timeline, for the exact same process. The collective WEF political leaders are all singing from the same hymnal.

In this discussion and interview segment, the spokesperson for The Netherlands’ Agricultural and Horticultural Organization, Wytse Sonnema, outlines why there is such a broad sense of “frustration, anger, even despair” among farmers amid proposals for nitrogen reduction target plans.

This will be coming to North America soon:

In very simple terms, the politicians cannot reduce the farming process for industrial food production without reducing the farming yield; it is just common sense.

You do not need to be a farmer to understand that nitrogen/phosphorus-based industrial fertilizer has been the reason why farm yields have generated massive amounts of food on a global basis. The U.S., U.K., and places like The Netherlands have massively increased their ability to generate food for export, in large part due to the success of improved fertilizer and crop saving modern pesticides.

It is a simple matter of math that if North American and European farmers are forced by climate policy to reduce their food production, there will be a shortage of food. There will be a significant gap between the food needed and the new climate driven limits on commercial food production.

This intentional curtailing of food production, that creates the purposeful shortage of food, is where Bill Gates, the WEF, and the synthetic meat and bugs for food advocates enter the picture. It appears the plan is to replace the missing global calories by changing the food supply: changing what, and how, people eat.

Lab grown (synthetic) meat, nut/soy milk to replace dairy, and bugs being used as replacements for protein sources are three approaches advocated by the climate change advocates that you are likely familiar with.  However, as we saw in the pandemic response to food consumption, there is going to be a massive problem as the WEF attempts to shift food delivery within their Great Reset.

Think of the U.S. like a massive global farm and, in this context, the parallels between the U.S. and The Netherlands are quite remarkable. Specifically, because of advancements in farming over the past two decades the United States food production has increased massively. The same is true for North America as a whole, with Mexico and Canada included. Industrial farming advancements have made it possible to export billions of tons of food every year from our farms in North America to the rest of the world.

The Dutch farmers are like the U.S. farmers in their high productivity. In fact, The Netherlands is the second biggest agriculture and food exporter in the world. Even with a small population of 17 million people, The Netherlands has consistently been among the top contenders in the food export market. The reason is simple, they are good at it.

Dutch farmers, like American farmers, are excellent at producing food. The Netherlands is one of the largest countries in the world when it comes to the export of agricultural goods such as meat, dairy, eggs, vegetables, and fruit. Unfortunately, this is why the climate change activists in the WEF have targeted them.

The Dutch farmers do not have as good a political shield as the U.S. farmer have through lobbyists. The reason the Dutch farmers have more vulnerability on a political front is because there are far more independent farmers who operate without the influence of large multinational agricultural corporations.

In the U.S., farming is Big Corporate Agriculture. Those massive “for profit” multinational corporations have massive lobbying power in congress. If Biden wants to drop U.S. food production, for now he is going to run up against the interests of Big Ag, who make money from exports and control of U.S. farm harvests. In The Netherlands, the farmers are more independent, making them more vulnerable to the political influences.

It’s a weird dynamic, but U.S. farmers are both exploited by, and somewhat protected by, the Big Ag mafia. The Dutch farmers have remained stubbornly independent in their operations with less multinational influence. Unfortunately, right now that makes them less represented in the politics of the EU.

The Dutch farmers are fighting back against the climate change politicians in the only way they can: a grassroots uprising.  This is the battle right now in the EU, and the Dutch are being joined by their brothers and sisters in Germany, Poland, and Italy.

This is not just a battle within The Netherlands and the EU to save farmers, this is a battle over the future of food in the world.

The western politicians, those who assemble under the banner of the WEF, want a world where “climate change” policy drives the dictates of all human activity. Essentially, a government policy position that allows politicians to control the behavior of humans under the guise of climate mitigation. Ultimately it is the control aspect of this dynamic that is more important than the climate aspect.

The stakes in this Dutch farming protest are much bigger than just Dutch farmers. If the farmers lose this war, we are all one step closer to eating bugs and fake meat.