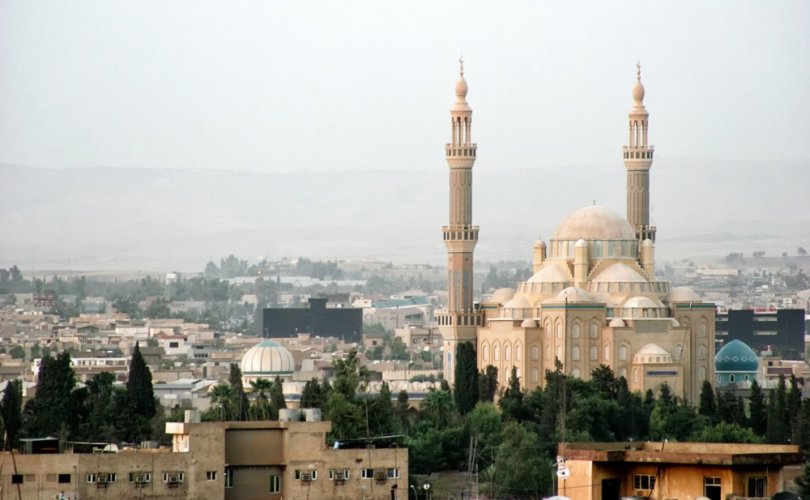 January 2, 2020 (The Catholic Thing) — A few days ago, I went to my trusted Lebanese-American mechanic for an oil change. The Christians of the East have always had a penchant for discussing theology, politics, and race — and as far as theology is concerned, the Easterners have all the theology they could want to discuss and contest. My routine car service, therefore, usually turns into interesting discussions on theology, Church history, and — most recently — the state of persecuted Christians in the East.

I guess this is one of the benefits of my being a Church historian. It happens that my mechanic was fresh back from Lebanon, which he had visited for his mother's funeral. He had a lot to tell me about the persecution and harassment Lebanese Christians are suffering at the hands of the Muslim majority and about recent protests — Hezbollah is currently the major political force in the country.

He and his family are Christians by birth, so they are officially allowed to worship freely. This is not always the case in practice, especially since the number of Christians in Lebanon is progressively diminishing and referring to Christians as a discrete minority has become the norm. According to statistics, in 1970, Lebanon was 62 percent Christian. By 2010, the Christian population in Lebanon was drastically reduced to about 36 percent. Maronite Catholics make up the largest Christian group, excluding the recent addition of Syrian refugees. Islam and Muslims have become the country's major religion and religious group, respectively.

Well, the conversation continued, and one of the main points my mechanic made was how the people of the West, and especially the Holy See and the Holy Father, have forgotten about the plight of the Christians in Lebanon and their fight for survival. Instead, the Vatican has been far more interested in climate change and other political issues than the extermination of Christians in the Middle East. He kept repeating: “We [Christians] are being erased,” and the West has been turning away.

Long after I left his shop, I couldn't get over this conversation. The Church in the West has been going through sexual scandal, financial corruption, the Pachamama controversy, financial raids at the Vatican, political intrigue, controversy over the viri probati, and the ordination of women to the diaconate. Meanwhile, the situation in the Middle East has deteriorated to such a point that Christian brothers and sisters from the lands that gave birth to Christianity might be extinct in the next few years.

As the celebration of the controversial Misa por la tierra sin males (Mass for an Earth without Evils) was going on, and the Pachamama was being displayed at Saint Mary in Traspontina Carmelite Church, an important event was happening in the Basilica of St. Bartholomew on the Tiber Island in Rome — though few have heard about it.

The event did not get the same attention the Pachamama and Amazon Synod received in the media. The pontifical foundation Aid to the Church in Need issued a new report, “Persecuted and Forgotten?,” focusing on Christian persecution between 2017 and 2019. As that report amply demonstrates, Christians are the most hunted and persecuted religious community in the world.

In July 2019, Islamists killed four Christians in Burkina Faso, and threatened to murder others, too, if they refused to convert. In India, “police in Uttar Pradesh's Jaunpur district charged 271 Christians with 'spreading lies about Hinduism' and using drugs to induce people to convert.”

Cardinal Leonardo Sandri, Prefect of the Congregation for the Oriental Churches, who presented the report, urged people to have the courage to call “the evil by its name” — the evil that rages in the hearts and destroys houses churches, feeding hatred and revenge.

Story after story rings alarm bells: Christians are being chased away from their lands; Christianity is being uprooted. In Iraq, for example, “the Christian population continued to decline. Christians had numbered 1.5 million before 2003 and yet by summer 2019, Christians in Iraq were 'well below' 150,000 and perhaps even below 120,000. This means that, within a generation, Iraq's Christian population has shrunk by more than 90 percent.”

Why are Christians persecuted and why are they forgotten? Obviously, Christians are persecuted for the very fact of being Christians and for following the prototype of martyrdom — the Son of God on the Cross. The world, which did not recognize God, persecuted Him. The same can be said of the world today: the secular, Godless and gutless, post-Christian world turns a blind eye to their plight and persecution.

Like my mechanic, many wish that the Church leaders would pay less attention to Pachamama and long-term climate change and more attention to an immediate threat: persecuted Christians who are on the brink of extinction. The Church could spend a great deal more of its energy on giving voice to the voiceless. The evil of Christian persecution and Christianity's forced disappearance from the Faith's ancient homeland should be called by its name, even if it is politically incorrect.

Defending defenseless Christians might not be fashionable, even in the Church these days, and may even lead to tensions with other faiths and various regimes. But it is the evil that is most neglected and, therefore, most cries out for action at this moment, not only by Christians but by the whole world.