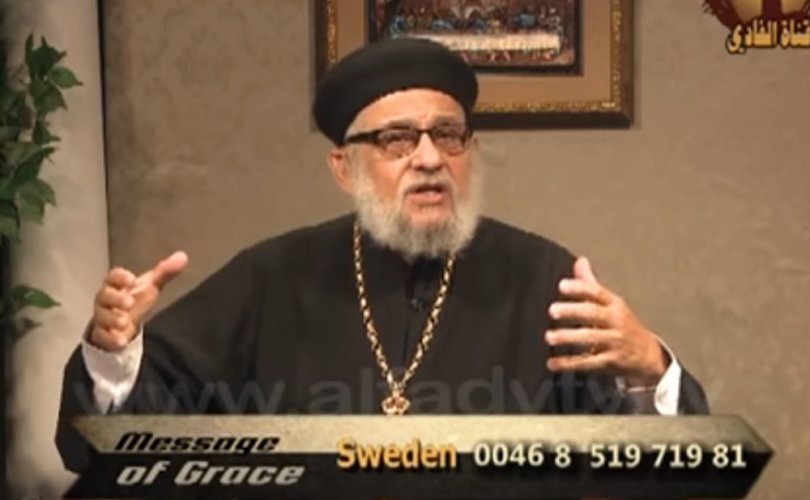 CAIRO, EGYPT, February 1, 2018 (LifeSiteNews) – One Egyptian Coptic Orthodox priest, called the “Scourge of Islam,” has risked his life to refute Islam and contrast it with the Christian Gospel.

Cleric Ahmad al-Qatani estimated at least six million Muslims every year forsook “Allah” for Christ, and blamed Fr. Botros for many of those conversions.

Fr. Botros evangelized on satellite TV – where Islamic leaders could not silence him – by simply and straightforwardly noting inconsistencies in the Koran and other Islamic texts, exposing the inhumanity of official teachings of the Ulema, and pointing out any one of the indisputably shameful doings of man’s “perfect example” Mohammed recorded in the authoritative Hadith:

Not surprisingly, numerous fatwas (death warrants) were issued against him. Al-Qaeda has allegedly offered sixty million dollars for Fr. Botros, dead or alive.

RELATED: A wonderful talk on how to celebrate Christmas by a former Muslim Imam

His apologetics-based talk shows were not only broadcast live, but with phone lines open for anyone.  Arab world Muslims called in droves, but none of his adversaries were able to withstand or contradict a single word of his wisdom (Luke 21:15).  He welcomed such debates, but only over the telephone, for his own safety.

Botros finished one show by comparing the life of Mohammed with the earthly ministry of Jesus.  Mohammed’s example led to war and terrorism, he argued, while Jesus’ led to peace and mercy.

“Jesus came to save souls,” Botros concluded.  “Mohammed came to sacrifice the souls of others in order to create a worldly empire for himself.”

Multiple people in Egypt tried to have Botros arrested for “high treason.” They sought to have his citizenship revoked for “instability and disturbing the public security” of Egypt.

Significantly, the Egyptian Coptic priest broadcast, spoke, and read from the Koran in Arabic, not only to speak in the language of the people but to debate the Koran straight out of its only officially accepted language.

RELATED: The Joy (and Cost) of the Gospel for young former Muslim, Nabeel Qureshi

Since the 1960s, the Egyptian priest sought out Muslims with whom to share the Good News.  In just over twenty years, Botros personally baptized over five hundred converts.  In 2000, he began to use the internet as a tool for evangelism.

From 2003 to 2010, his “Life TV” carried by the BBC Arabic news portal reached tens of million of Muslims every week.  His mass proselytizing led al-Jazeera to curse the channel for its global “unprecedented evangelical raid” of Islam.

At the height of the show’s popularity in 2010, Joyce Meyer, a financial partner for Life TV’s parent Hayah Channel, inexplicably informed BBC Arabic that it “decided to stop broadcasting Zakaria Botros’s talk show, and this is the last month of its broadcast.”

Undaunted, in 2011 the Orthodox Egyptian priest started his own satellite station, “Redeemer TV.”

During President Obama’s tenure, Botros (who by that time had dual Egyptian-U.S. citizenship) recorded a public message correcting the president’s “shocking” and “saddening” “lack of knowledge” in criticizing Christianity at the National Prayer Breakfast.

Again in 2015, the Coptic priest corrected Obama’s portrayal of Islam as peaceful.  Warning of the religion’s intrinsic terrorism, Botros rhetorically asked, “Mr. President, could you or the Congress allow the Nazis and Nazism to be exercised freely in the United States?”

Using Islam to undercut its own arguments

While the U.S. and her allies fight ISIS with bombs and drone strikes, Father Botros fights through persuasion.  The essential difference between him and well-meaning Westerners is Westerners limit themselves to secular arguments which only make sense to themselves (Islam is “anti-progressive,” “intolerant,” and “misogynist”), but Father Botros cuts to the core driver of terrorism: the Islamic faith itself.

“Father Zakaria…takes it right to the heart of the matter,” Botros biographer and Islam expert Raymond Ibrahim observes.  “He sincerely addressed his Muslim viewers: ‘Would God truly want you to kill your neighbor, to enslave him? Would the Almighty truly want believers to buy and sell other human beings like animals? Think people! Use your minds!  Listen to your hearts —for your souls are at stake!’“

Secularists fight Islam as if its faults were only political.  Botros speaks to the foundations of Islam’s geo-political agenda:  its faith in a false idol.  He seeks to practically demonstrate the love of Jesus over the oppression of ‘Allah,’ pulling the weed out at its root, rather than trying to simply cut the top of the dandelion.

But his interest is not in stopping Islamic world-conquest, or even terrorism.  His concern is purer than that.

“His primary interest is the salvation of souls,” Ibrahim states.  His mission “is to attack Islam, not to attack Muslims,” he says, “to save them because they are deceived.”  At a Sacramento event in 2014, he explained, “I love Muslims as much as I hate Islam.”

And with that pure a motive, he consistently defeated the world’s greatest military enemy.

He began and ended his programs by reminding viewers that he loves them, and only wants to help them see light and hope and love.

“Botros’s motive is…to draw Muslims away from the dead legalism of Sharia to…Christ,” Ibrahim explains.  “To disempower radical Islam, something (God-centered) and spiritually satisfying —not secularism, democracy, capitalism, materialism, feminism, etc.— must be offered in its place.”

Christians, not Christianity, cause Muslims to convert

A 16-year study from 30 countries revealed that the behavior of Christians is the top reason Muslims convert.

Former Muslims listed the moral integrity and the consistently joyful lifestyle of Christians they knew as the number one reason for converting to the Lord Jesus.

Other converts also noted how Christians have loving marriages or genuinely care about others or live simply, without attachment to mammon.  Some also experienced a miraculous healing through the prayers of their Christian neighbors.

While Christianity has no religious kinship with Islam, there is some common ground, including the recognition that life begins at conception.  LifeSiteNews co-founder Steve Jalsevac notes prolifers work with Muslims on a global scale to fight the United Nations’ pro-abortion agenda.

“Many Muslims may end up being our great allies against the secularist New World Order tyrants,” Jalsevac frankly pointed out.  “We should not write off all or even most Muslims, regardless of what is in the Koran and Hadith. Muslims are people and many of them seek peace and a fulfilling family life.”

“Many also sincerely seek God but they have been given a false God,” Jalsevac continued.  “The call to all of us is to live a faithful Christian life and then to actively evangelize Muslims – who are proving to be very receptive to such evangelization.”

Nevertheless, Jalsevac advised we must never acquiesce to the politically correct lie that Islam is peaceful.

“Militant Jihadists must be fought with much greater vigor and we need to stop all the politically correct special protections being given to them in the West,” he said.

As for the alleged sixty million dollar bounty on his head, Father is unafraid.  He figures that if al-Qaeda gets its bloody wish, he would gain more than his greatest hope.

“I’d be very happy if Al Qaeda or radical Muslims kill me,” he told a California television station. “If someone takes one shot at me, he takes me to that place [heaven].  I should say ‘Thank you. I arrived. I arrived.’”

Don’t be fooled: Muslims don’t have the same family values as Christians

When Islam Abandoned Reason: A Conversation with Robert R. Reilly

The Joy (and Cost) of the Gospel for young former Muslim, Nabeel Qureshi