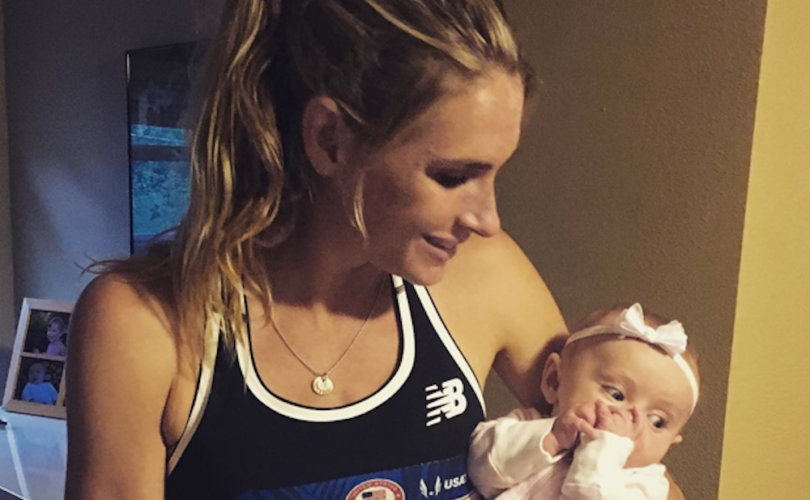 August 17, 2016 (Newsbusters) — Women’s magazines are notoriously pro-choice. Therefore, when the tweet below appeared in my feed this morning, I thought I knew what to expect.

Abortion seemed liked a logical answer. After all, in 2014, senior editor of Elle Magazine Laurie Abraham penned a piece entitled “Abortion: Not Easy, Not Sorry.” In it, she wrote: “Nearly one in three American women will have an abortion by age 45. Why are we so afraid to talk about it — or to acknowledge that our lives would have been so much less than we hoped for without it? Why are we pressured to feel that we should regret our choice, and that there's something wrong with us if we don't?”

This kind of content had shaped my expectations. In fact, Abraham's article could have been a perfect segue for the tale of an empowered woman who aborted the baby that got in the way of her Olympic dreams. Warily, I clicked on the link.

But what I got was a lovely surprise. The article detailed the inspirational story of Sarah Brown, an elite runner who discovered, while at the peak of her Olympic trials training, that she was pregnant — but she never even considered abortion.

“I was at top of my game and then, all the sudden, it was like I fell off a cliff. I felt so fatigued in my races, like I felt like I was running through sand. I couldn't figure out what was wrong. By the time I found out I was pregnant, it was a lot of mixed emotions.” But she was excited too. “This is my first child and my husband and I did plan on having kids at some point, it just happened a bit earlier than we were expecting!” she told Elle’s Kristina Rodulfo.

In an interview with Alison Wade of Runner’s World, Brown revealed that she wanted to keep her child from the moment she heard the news. “It was one of those things where I wasn’t ready to have a kid, but also, as soon as I found out I was pregnant, I wasn’t ready for the thought of losing that kid. As terrifying as it was to become a mom, I knew that that was what I wanted,” she said.

In the ultimate display of true feminist choice, “she set her sights on both achieving her career goals and having her child,” Rodulfo wrote. The decision was a family affair. Brown’s husband and coach, Darren, was literally with her every step of the way. He often trained alongside Sarah, donning a weight vest to truly empathize. “I don’t know if I could have done a lot of the things I did if [my coach wasn’t my husband],” Sarah told Rodulfo, “just from a standpoint of him seeing me every day, working very closely with me, knowing how I’m feeling.”

What gave Brown these strong convictions and determination? Her bio on Athlete Biz gives a clue: “Sarah believes that her running talent is a gift from God and needs to be used for something more than her own personal gains.”

This summer, she had an opportunity to put her beliefs into practice. Although Brown was slated to place at the Rio Olympics, she never made it past the trials. But her inspirational reaction to the disappointment revealed her strong faith.

“Today wasn't the fairy tale ending you dream about. But then again, this journey never really was about an ending, it's a beginning,” she posted on Instagram. “A new chapter as a family of three. Thanks for all the support ❤ & you can bet you will continue to see this mama run #runmamarun”