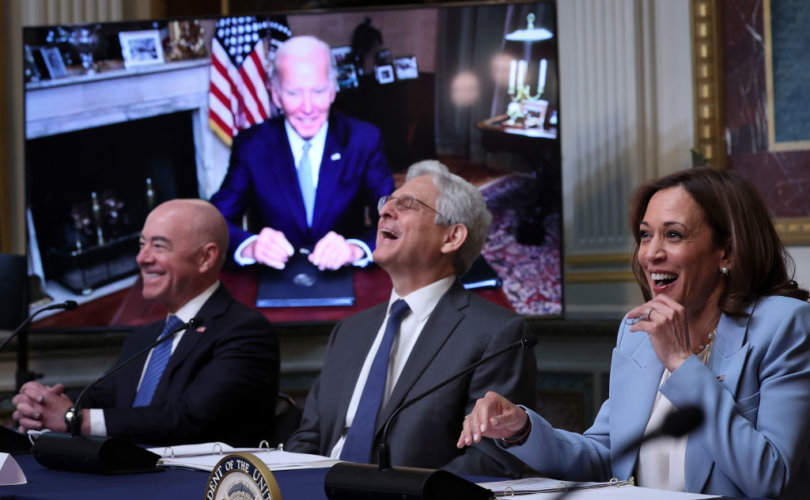 (American Thinker) – The entire panoply of the Chinese Coronavirus ‘pandemic’ countermeasures, from lockdowns to vaccine mandates, has been a once in a century fiasco and among the biggest blunders in American history. This chapter is also the catalyst that emboldened an already despotic ruling class and the American left:

Over the centuries, in virtually all societies, people known to be infected by various diseases were confined and isolated to mitigate the spread and protect the rest of society. Never has a nation essentially shut down its economy, closed schools and confined the entire populace. Nor has the United States ever enforced de facto national mandates for unproven and potentially dangerous vaccines. And, never in the nation’s history has a pandemic been politicized in order to defeat a certain candidate and benefit one political party.

Centuries of best practices and ethical standards were discarded by many in the medical profession and scientific institutions. The federal medical bureaucracies abandoned virtually all oversight of the pharmaceutical companies, and became in effect their marketing departments, promoting and mandating COVID vaccines without adequate safety standards and long-term testing. What was obvious blatant propaganda was presented and accepted by the American citizenry as unquestioned truth. The entirety of the corporate and social media willingly morphed into mouthpieces and censors for the government.

Why did the vast majority of the American citizens meekly succumb to the unprecedented usurpation of their rights and unquestioningly believe the so-called “experts?” Why did so many turn into a group-thinking herd mindlessly marching to the music played by the government? Why did so many scientists, educators, doctors, and journalists abandon their integrity and compassion as well as scientific and intellectual curiosity?

Over the past half-century, the all-consuming pursuit of unfettered personal and physical satisfaction has eventuated in abject disdain toward, and the abandonment of, the basic rules of human behavior and morality as espoused by Judeo-Christian teachings. The moral fiber of a country, and the religious basis upon which the United States and European nations developed, is being replaced by a misguided and unquestioning faith in man and his institutions (i.e., government, educational establishments, global corporations, and “experts”).

As a result, an ever-increasing percentage of the citizenry has been conditioned to unquestioningly look to the government and its attendant institutions and experts to cure all societal and health related ills. The unprincipled ruling class and its allies, the radical American left and mainstream media, have for decades promoted this mindset as it abets their lust for permanent power. However, this obligates those in power to cure all ills, even a global ‘pandemic.’ Thus, it follows that the State will inevitably claim that in order to do so it must take control of our lives against our will even if we are healthy.

The most effective tool in manipulating an increasingly agnostic and secular populace is to provoke fear and panic. Which is easily done with a sizable percentage of the American population that has become hyper risk-averse and permanently on the verge of a nervous breakdown. Herd mentality and mass hysteria are effortlessly fomented as far too many, rather than question the “experts,” are willing to believe anything the omnipotent government bureaucrats and politicians say and to mindlessly follow their edicts.

The well-publicized and choreographed draconian lockdowns undertaken by the Chinese Communists promoting the inane concept of eliminating the virus, combined with 1) the mimicking of China by the first lockdown in the West (Italy in February of 2020) and 2) the dire grossly exaggerated and unscientific fatality estimates by various institutions who recommended world-wide lockdowns, gave the ruling elites the pretext to sow fear and panic by portraying the virus in Hollywoodesque apocalyptic terms.

Yet, it was known among medical professionals that COVID was far less deadly and was in fact on the decline in Italy even before other western countries’ full lockdowns began. It was also known that the virus had an exponentially lower infection fatality rate than projected and that the vast majority of infections and fatalities were among the health-compromised elderly and not the general population.

The unscrupulous ruling class and the American left, following the lead of their soulmates in China, seized upon lockdowns not as solution to the COVID ‘pandemic’ but as a means of entrenching themselves and defeating Donald Trump. Their demand for COVID lockdowns assumed that a majority of the malleable citizenry, who view the government as virtually omnipotent, could be easily herded and manipulated. Even they were astonished how easily the overall populace succumbed to their unscientific and unreasonable demands.

This trait among the public-at-large further emboldened the elites and the left to unabashedly and overtly manipulate and unconstitutionally change voting laws in numerous states, resulting in a massively fraud-ridden election that eventuated in the swearing in of an unqualified, incompetent, and compliant Joe Biden. They were confident that the courts and a majority of the citizenry would not vehemently object and would in fact meekly tolerate the results of the election and accept a dementia-ridden Joe Biden as president. They were right, again.

Once the bulk of the American citizenry had been stampeded into mass hysteria, a solution to the Coronavirus had to found. The various Coronavirus vaccines were designated as that solution once Joe Biden was elected. Prior to that, the corporate media and many in the medical profession warned about the dangers of unproven vaccines being approved too fast. Nonetheless, these vaccines, devoid of adequate safety standards and long-term testing, were quickly approved after the election was over. Further, Biden told the nation, “You’re not going to get COVID if you have these vaccines.”

A population steeped in panic and unquestioned trust in government quickly lined up for the shots. Further flexing their hold on a vast majority of the citizenry, the ruling class unabashedly resorted to vaccine mandates. They read the people correctly again. As to date 262 million Americans or 79% of the population have reportedly received at least one dose of the vaccines and 223 million or 67% are considered fully vaccinated.

The reality is that those who have been fully vaccinated and/or boosted are succumbing to COVID infections at astonishing rates. Further there has been an unheard of and extraordinarily high number of deaths and serious side-effects in less than 18 months of COVID shots as compared to the total number of deaths and serious side-effects documented in over thirty years of all other vaccines combined.

Yet, despite the economic and societal turmoil caused by the lockdowns, the fraudulent election in 2020, the gross malfeasance with the COVID vaccines, and the ongoing national chaos precipitated by the election of Joe Biden, far too many Americans, having turned their back on God, still place virtually all their trust and hope in their new God: government, various institutions, and so-called “experts.”

It is little wonder that the iniquitous ruling class and the American left are emboldened to promote unfettered abortions and de facto infanticide, to unabashedly persecute their political adversaries, to openly torment President Trump and raid his home in order to keep him from running in 2024, to force a catastrophic “green new deal” on the nation, to undermine the monetary system and economy, to embolden their spiritual ally China, and to manipulate elections at will. They are confident, as America’s new ‘god,’ that they are invincible, infallible and will be in power in perpetuity, as the majority of the populace will always look to them for salvation.

The human race has always been susceptible to its base nature, which has been the downfall of civilizations since the dawn of man. If the bulk of the American citizenry do not begin to return to a belief in a Supreme Being and endeavor to live by the tenets of Judeo-Christian teachings, as well as turn out in massive numbers to vote in November of 2022 and elect either Donald Trump or Ron DeSantis in 2024, then this nation as founded will have gone past the point of no return.