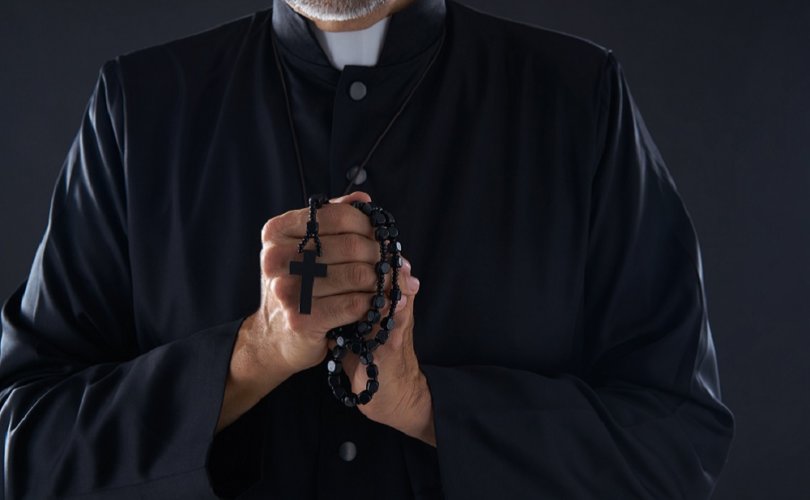 August 20, 2019 (Crisis) — It's coming up on 20 years since my uncle, Msgr. Thomas Wells, was murdered in his Maryland rectory during a somber late summer night. Deputy state attorney Kay Winfree called the scene spine-chilling: as gruesome as anything she'd ever encountered.

His body was marked by deep stab wounds around his head and neck, accompanied by many dozens of slashes to various other parts of his body, like stigmata from hell. His murderer, Robert Paul Lucas, followed the well-worn path of a cold-blooded killer, hiding his outdated brown-and-beige van amid a metallic forest of other dilapidated vehicles tucked away off a country road.

An alcohol- and cocaine-fueled homeless tree trimmer carried out Satan's handiwork. But that's only part of the story of the murder of one of the most beloved priests in the history of the Archdiocese of Washington.

The groundwork was laid by bad Catholic priests.

An unshakable conviction, shared by dozens of priests and thousands of lay faithful in the Maryland/DC corridor, is that Msgr. Wells's life and 29-year priesthood ended as a direct result of the active homosexuality practiced by priests who once lived in that rectory.

In the aftermath of Tommy's murder (from here on out I'll refer to my uncle as “Tommy,” as our family called him with affection) we learned that the now-bulldozed Mother Seton rectory in Germantown, Maryland had been the site of years of appalling sacrilege and sin. It emerged that two priests, Rev. Paul E. Lavin and Rev. Aaron J. Cote, who had served at Mother Seton, had been credibly accused as sexual predators of teenage boys. Lavin has been stripped of his clerical faculties and Cote, accused of sexual molestation in at least four states and Peru, died in 2012. A third Mother Seton priest, who seems to have vanished from the state of Maryland, is widely known to have been sexually active with other men prior to my uncle's arrival.

My uncle's first official act as pastor at Mother Seton was to rip out the rectory hot tub. A close friend and confidant of Tommy's, a secret service agent and police officer involved with the investigatory work of the murder, knew my uncle was twice requested by James Cardinal Hickey of Washington, DC to uproot homosexual rings at Mother Seton and at his previous parish. This confidant shared with me what many around these parts already knew: priests living in the Mother Seton rectory were widely known to have thrown “hot tub parties” for other priests.

“Msgr. Wells was the hand-picked priest to get rid of the rot. He was to report to the Cardinal on what he'd discovered,” the secret service agent told me. “I have no doubt about it — that night, his murderer was looking for a 'trick.' Msgr. Wells was murdered because of the homosexual activity that had taken place in that rectory.”

So, why bring up this sewer of memory now?

Well, for one, I loved my uncle. I spent much of my life in his orbit, vacationing with him in Ireland, Montana, the Berkshires, and numerous other places. For many years after his murder, I wrestled with my own conflicted thoughts about the Church and her priests. Within this divine and human institution, what are the contours and limits of a priest's supernatural weight? What is the fullness of his earthly role? In addition to asking God to help answer these questions in the silence of many Holy Hours over the years, as an old reporter, I began asking these same questions of faithful and intentional priests.

As answers began to filter in, I found myself swept back into the biographies of Vianney, Pio, Neumann, Neri, Kolbe and other priestly giants. Then I witnessed first-hand accounts of sacrificial work from some faithful priests I knew. Men and women of great wisdom and holiness opened up to me, and I started recording and organizing the information they gave me. I was on a high-powered pilgrimage the likes of which I had never before experienced when suddenly the idea of writing a book took root in my mind. But who was I, as a layman, to write a book on how priests should be?

I'll tell you who I am: a faithful Catholic who has had enough of the lurid headlines. I speak in solidarity with many millions of ashamed and disillusioned fellow Catholics reeling from the audacious sin that has been allowed to metastasize within the Church for far too long. Too many wayward churchmen have profaned, insulted, and trampled upon a sacred heritage that generations of hardworking, sincere Catholics built their lives around. We need faithful priests, not the lazy, repressed, social justice types with inauthentic vocations who have packed the seminaries, dominated the headlines, and sullied the reputation of the holy priesthood over the past several decades.

We need intentional priests' counsel, guidance, and holy example, especially in this time of rapidly advancing militant secularism. So I wrote a book, a book about the true Catholic priesthood, a book about my Uncle Tommy, and this week Sophia Institute Press releases The Priests We Need to Save the Church. In the book I dare to tell the clergy why their flock is fleeing and beg them to reconsider their sacrificial role of shepherding their lost and bleeding sheep back to the pen.

We need real men today, bold proclaimers of God's Word who are unafraid to preach the Catholic faith as the blazing furnace of Truth that it is. We need priests who are willing to preach tough homilies, hear daily confessions, commit to daily Holy Hours, and remain magnanimous of heart through long, sometimes thankless 16-hour days. We need priests to offer us their lives now so that the laity will gain a restored sense of fatherhood. Such priests will become the story of our time. They will bring about massive conversions and restore our Church and our culture.

Two nights before my uncle's murder, Tommy sat across from me and my wife Krista on the back deck of that sin-haunted Maryland rectory. It was there that he changed the course of our lives. Soon after he married us several years earlier, Krista and I had discovered that we couldn't have children. We'd wake each morning to the wretchedness of infertility and the suffocating sadness it brought, given our desire to raise a large family.

Krista wanted to pursue having children through the tempting science of in-vitro fertilization. I wanted to adopt. We were at odds and our battles were growing in intensity. Satan was circling our small apartment like a vulture and we were in need of rescue.

In the nick of time, Tommy flipped our lives.

With a few short sentences he brought us to Golgotha, to the foot of the blood-soaked Cross, and for the first time in months, a pinhole of illuminative light shone through. Up to that point we had looked upon our cross of infertility as revolting — a blanket of thorns — but Tommy told us that it was actually a gift. The notion struck us as ridiculous, but the surge of warmth we felt as he spoke those words assured us that they were ordered and true. Our love has blossomed and our lives have never been the same since.

Tommy just had a way about him, a heavenly power. He once picked up a stranger who was an atheist on the side of the road in Kentucky and spoke with him for a few hours as they drove down the road. A few years later, after an intense period of study and prayer, the hitchhiker became president of the Canadian Fellowship of Catholic Scholars. He also became a deacon. “Your uncle led me to all of this,” Doug McManaman told me.

David Russell, a Vietnam Marine Corps frontline soldier-turned-drifter, worked at a gas station down the road from Tommy's first parish, Sacred Heart in Bowie, MD. Tommy and the attendant began to strike up conversations at each fill-up. In the process of discovering the mental scars the war had inflicted on David, Tommy learned that he was a Catholic. Their talks intensified and, within a year, the Marine vet became a daily communicant. One day Tommy asked him if he'd like to assist with youth catechesis, aware that his charred memories and feelings of exile might be buoyed by childhood innocence. The drifter obliged. Sometime later, my uncle asked David if he'd consider the priesthood. Fr. Russell has now been an ordained priest in the Archdiocese of Washington (D.C.) for more than three decades. He preached at Tommy's memorial Mass on the eve of his funeral.

Tommy's power came from the Eucharist. His life and his priesthood were centered on it, and everyone at the Masses he celebrated knew it. Each time he elevated the Host after the Consecration, his visage and manner would be visibly transformed by the awe he felt at being permitted to lift Jesus heavenward.

The explosively joyful quality of his homilies inspired thousands of hearts over the years, but the manner in which he reverenced the Eucharist moved souls. It wasn't cheap opera either; it was an authentic sharing of his soul. This mystical unfolding at Consecration, in fact, triggered the desire in more than a few awestruck young men to pull up stakes and leave steady girlfriends, budding careers, and relaxed lifestyles to turn their lives over to God in the priesthood.

“He was the most joyful man I ever knew,” said Fr. Jim Stack, an old friend. “He was the best priest I ever knew. He just got it. The joy of the truth of Christ lived in him; you couldn't miss it. People wanted what he had.”

Right now, the entire world — wittingly or not — wants, and needs, exactly that.

Published with permission from Crisis.