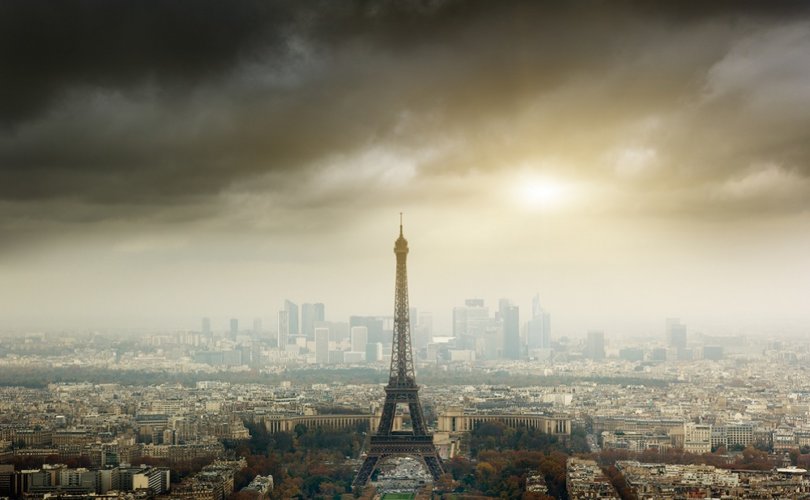 February 18, 2020 (American Thinker) — When Notre Dame Cathedral burned in 2019, it was symbolic of a greater Europe-wide collapse of religious faith that had already taken place. That great cathedral, like most of the others in Europe, had long since passed from being a vibrant community of active worshipers to an architectural showpiece attracting millions of tourists, taking millions of photographs.

The process, which has brought about the death of Judeo-Christian culture in Europe, is now being replicated in America. If America wants to know its grim future, it only has to consult the facts of present-day European society.

From the earliest days of American history, religion played an outsized role. Even during the 1700s, when it was intellectually fashionable for some of our leaders like Thomas Jefferson to scoff at supernaturalism and prefer deism to theism, they still held tightly to the moral and spiritual truths expressed in the Holy Bible. They could do without belief in miracles in general but not the necessary miracle of a creator God who established an unchanging moral order. French philosopher Alexis de Tocqueville, who visited America in the 1800s, took particular note of America's highly religious national character as compared to European society. He knew the horrors into which French society was plunged as a result of extreme anti-religious sentiment.

The history of the world is littered with failed revolutions that promised to remake their societies in a better image. The American Revolution is among the few which have actually succeeded.

The bad news is that we are now no longer on the same path. We have opted for the European model.

The last sixty years of American history reveal that we have been on a new path. It is a path that leads away from freedom and individual responsibility. It is a path that mistakes vice for freedom and socialism for progress. Because Europe began this journey before us, we can now see our future in their present

If we begin with a comparison of religious practice, the surveys of American society show a number between 37% and 22% for Americans who attend weekly services.

The average of these numbers, below 30%, is the lowest in modern American history, but if you are a person of faith in Europe, you would be celebrating this as the sign of a great religious revival. The average church attendance for the countries of Northern Europe is 4%. There are only three countries in Europe where more than 10% of young people attend religious services on a weekly basis.

What must be understood are the characteristics of this new post-Judeo-Christian Europe. What do the sociological data tell us is happening there? Sociologists, psychologists, and historians all agree on one point: the family unit is the basis of all societies. The present European family is in a state of crisis. As much as we lament America's high divorce rate of 53%, Europe's is higher, in some countries reaching 60%. Worse than the high divorce rates are the high out-of-wedlock birth rates and the huge increase in single-parent families. The “Max Planck Society” published the following in 2016:

The significance of marriage slowly started to decline as early as 1970, a process linked to the advance of secularization in many countries[.] … By 1990, the share of unmarried births had already increased fourfold[.] … In many parts of Northern and Western Europe, there are already more births out of wedlock than births within marriage.

The same process is taking place in America. The difference is that America's religious attendance was much higher than Europe's when the process started. We are moving in the same direction as Europe but at a slower pace.

The fact that European societies are still relatively prosperous and orderly in spite of these demographic changes is only a testament to what historian Will Durant called “living in the after- glow of one's faith.” No society will collapse immediately, but already these changes are showing themselves in a variety of dark statistics.

The crisis in the European family is rapidly becoming a mental health crisis.

The most recent large-scale study of Europe, covering 514 million people, found that mental illness had increased to 38%.

Based upon World Health Organization statistics, Europeans commit suicide more than the people of any other region of the world. Russia has the highest rate, followed by other Eastern European nations, all of which were until recent years ruled by communist governments, which viewed religion as taboo. Following these Eastern European nations, the most secular parts of Western and Northern Europe have the next highest rates of suicide. The more traditional culturally conservative parts of Europe have the lowest rates of suicide. Lagging behind Europe, America is making great strides to catch up. The CDC reported in 2018 that America now has the highest rate of suicide in 50 years.

In Europe, this is not just a problem of highly depressed people wanting to end their lives. There is a concerted effort on the part of medical professionals to assist others in doing so. Belgium now carries the label of the “world's euthanasia capital” and even allows suicide by lethal injection for children.

Following the same guiding principle of utility, Europe is now number four on the list of continents that carry out the most abortions. The fact that the primary victim of an abortion is an unborn child without a voice makes the problem easier to ignore. Much harder to ignore is the explosion in human-trafficking taking place in Europe.

The Department of Homeland Security has described the problem of human-trafficking, as a “modern day form of slavery … among the world's fastest growing criminal industries.” BusinessLine reported in 2019 that “children now account for 30 per cent of those being trafficked[.] … Trafficking for sexual exploitation is the most prevalent form in European countries[.]”

Three of the top ten areas for sex tourism are located in Europe, and all the others are located in poor, less developed regions of the world. In America, the same thing is happening. Feminists, pro–homosexual rights advocates and cultural celebrities are using terms like “pansexual,” “gender fluidity,” and “One Love” to begin the major re-education of American society. Harvard professor Sarah Richardson, a supporter of this task, has described the necessary change in this way:

Young people will lead us in directions that we have never imagined[.] … [M]ore and more young people are transcending gender norms[.] … [A] more sophisticated view of gender seems to be everywhere we look … [i]s expanding our ideas of identify and love.

Well, the Europeans have both imagined and are realizing that this “Brave New World” and the “New Morality” look a lot like the “Old Immorality.” The imagined utopian welfare state of Europe is now being realized for what it is: a dystopian society where the soul of mankind dies, and selfish appetites reign. In America, we are faithfully retracing the European steps, which include the death of faith, the death of the family, and the de-humanization of mankind.

William D. Howard is a freelance writer who had a long career as an educator. He holds degrees in philosophy and history and has traveled widely in over 40 countries.