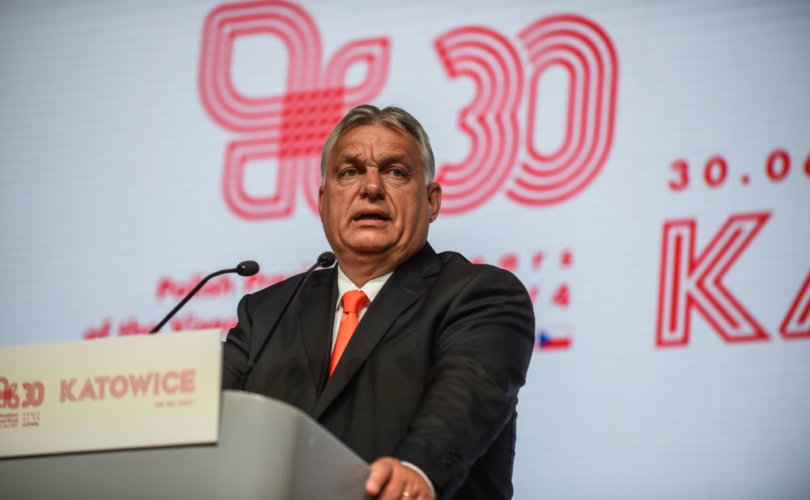 (LifeSiteNews) — With the EU announcing the eighth round of sanctions on Russia, attention may have slipped from the fact that it is also sanctioning its own states. Both Poland and Hungary have been disciplined by the EU under the serious charge of undermining democratic values, with the EU threatening to cut Hungary’s budget by 7.5 billion euros in November.

To understand what these “values” are, and the penalties for failing to celebrate them, go back to September 2015, when the European Parliament first discussed taking Article Seven proceedings against Hungary and then Poland. The process seeks to identify whether there has been a ‘“a clear risk of a serious breach’ of the EU’s common values” in these countries. Initially a concern over these “common values,” the charges are now that Hungary and Poland no longer support the rule of law.

Article seven provides for placing economic sanctions on member states and suspending their voting rights. It is intended to isolate them economically and silence them diplomatically. Article Seven, whose history can be read here, is effectively a means of cancelling countries from the former Soviet bloc whose socially conservative values do not agree with those of the West.

The European Parliament then moved against Hungary in September 2018, becoming the first EU institution to initiate Article Seven proceedings against the country. MEPs argued that Budapest, under Prime Minister Viktor Orbán, had damaged the country’s judicial independence, engaged in corruption, restricted freedom of expression, and infringed on minority and migrant rights, among other concerns.

The process moved on in 2019, when the European Commission began a lengthy legal process in the EU’s top court against Hungary.

Why did it do this? The issue then was Hungary’s law that “criminalises helping refugees and migrants” as well as “the higher education law that forced the Central European University (CEU) funded by George Soros out of the country.”

As for Poland, it has still to see its frozen EU funding released from the new seven-year European budget, including post-pandemic recovery funds. It has recently reiterated demands for 1.3 trillion euros in World War 2 reparations from Germany and has described of Ursula Von Der Leyen’s warning she has “the tools to rein in” Italy’s new populist government as ‘scandalous and anti-democratic.”

Both Hungary and Poland have taken extensive steps to reform their administrations in the light of suggested corruption, which added a new dimension to the cancellation of their countries based on their respective steadfast defense of the family, of Christianity, and opposition to the promotion of the LGBTQ+ agenda. Hungary’s crimes began with their successful attempts to secure the country’s borders in 2015 against a wave of migration encouraged by Angela Merkel and the EU.

The implementation of these reforms remains the sole issue as to whether the EU will decide in November to sanction Hungary. With Poland’s funding still deadlocked, another dimension was added to the frustration of Hungary’s attempts to run a system of policies designed to benefit its native population with a strong platform of pro-family policies. The EU is now beginning to find fault with their judicial independence.

These punitive measures, the moving of the goalposts, and the seven-year history of momentum show the steadfast determination of the EU to use the very tools mentioned by Von Der Leyen to “rein in” nations who refuse the rainbow agenda.

Second, criticism of Soros’ activities has been met with the usual charges of anti-Semitism, when in fact Soros has been criticized for nothing more than what he has been found to be doing. This is unacceptable to the EU, who will never forgive or forget the remarks of Zoltán Kovács, Hungarian state secretary for international communication and relations, who tweeted “The Soros orchestra is about ready to take the stage” outside the EU council chamber in 2019, before an EU summit on the proceedings against Hungary.

Rather than these baseless allegations, the case against Hungary is simple. Its leader and leading party completely reject the failed and catastrophic “values” of the West, which has resulted in the formerly free world’s capture by insane gender ideology and an open borders policy that has, according to Orban, destroyed it. In a speech in July, he remarked:

These countries are no longer nations; they are nothing more than a conglomeration of peoples. I could also say that it is no longer the Western world, but the post-Western world.

Such talk is anathema to the EU, which both denounces criticism of Soros’ influence as unevidenced racist slander, while at the same time publishes strong criticism from his own Open Society Institute in Europe:

“EU states have an obligation to act together to halt the hollowing out of public institutions and attacks on the rule of law in Poland, Hungary and any other member state that threatens core European values,” said Natacha Kazatchkine, head of internal EU policy at Open Society European Policy Institute.

The goal of this legal and financial harassment is clear: to take action to defend traditional and Christian values is to be “no longer a democracy.” Further, “Several MEPs are also worried that Orbán’s template might be contagious throughout Europe for other far-right governments,” — a repeat of the familiar canard of extremism leveled at any state – or person – espousing views completely normal before the capture of our institutions by the various agendas that now rule them for their own ends.

Perhaps Hungarian Justice Minister, Judit Varga said it best in her June 2019 remarks on the EU’s legal and financial toolbox: “Hungary in the spirit of loyal cooperation stands ready for dialogue” on issues related to the rule of law, the minister wrote. “The politically-motivated witch hunts, however, we continue to reject.”

The actions against Hungary and Poland — with rumblings of similar “tools” to be employed in the disciplining of Italy – are a clear indication of the limits of and ruling values of the European Union. It is difficult to avoid the perception that democracy is in retreat in the West, and that our freedom is increasingly limited, on the state as on the personal level, as the freedom to agree or be punished.

Frank Wright lives in Hampshire, UK, with his family. You can read more of his reality reviews at https://frankwright.substack.com/