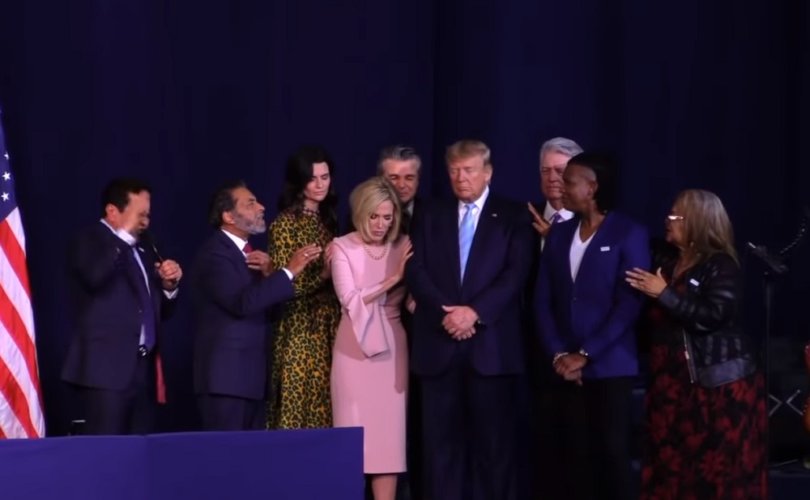 January 7, 2019 (FRC Action) — “I may not be perfect,” President Trump admitted, “but I get things done.” And for many voters, including evangelicals, that's what matters. In fact, for the thousands of supporters packed into Miami's Ministerio Internacional El Rey Jesús last Friday, it was probably the best explanation yet for the strong bond between Christians and this White House. Unlike the media, who can't seem to understand the appeal of this president to his most enthusiastic base, evangelicals would say it's simple: promises made, promises kept. And they have three years of examples to prove it.

To the outside world, it's a mystery. To conservatives, there's nothing baffling about it. Donald Trump won the election by offering a contrast to the Left's anti-faith, anti-family agenda. But he's won respect by acting on it. And the flocks of faithful pouring into his rallies appreciate that. “There are plenty of evangelical Americans who maybe didn't support President Trump in [2016] because they didn't believe he was a true ally,” one campaign official pointed out. But those same people, he went on, “are now taking a second look at him because of his record.”

It's that record, the one President Trump touted for the better part of 75 minutes, that the throngs of people jammed into the Florida megachurch stood and cheered. When he tweeted, in classic Trump fashion, that no president had ever done more for Christians than his administration, it was true. From the unborn to judges, international religious freedom to Israel, this White House has earned the support it's getting.

Christians, the president repeated, “have never had a greater champion — not even close — than you have in the White House right now. Look at the record,” Trump urged. “We've done things that nobody thought was possible. We're not only defending our constitutional rights, we're also defending religion itself, which is under siege.” That's important, he argued, because “America was not built by religion-hating socialists. America was built by churchgoing, God-worshiping, freedom-loving patriots.”

And those patriots, President Trump insisted, are the ones being attacked. “Faith-based schools, charities, hospitals, adoption agencies, pastors were systematically targeted by federal bureaucrats and ordered to stop following their beliefs,” he pointed out. That all changed when his teams at HHS, Justice, and Education got involved rolling back the waves of hostility aimed directly at men and women of faith. “The day I was sworn in, the federal government's war on religion came to an abrupt end,” he said. “My administration will never stop fighting for Americans of faith,” Trump vowed. “We will restore the faith as the true foundation of American life.”

Maybe that, as Pastor Jentezen Franklin prayed, is what believers appreciate most about this administration. “…America didn't need a preacher in the Oval Office,” he said, bowing his head. “It did not need a professional politician in the Oval Office. But it needed a fighter and a champion for freedom. Lord, that is exactly what we have.” And more than that, I thought, as I watched pastors lay their hands on the president, we have a fighter who isn't ashamed of the people he's fighting for. After all, when was the last time you saw a president of the United States from either party surrounded by faith leaders in a completely public and unscripted prayer? It's rare, I assure you.

That comfort level is what's helped to create a real and honest connection with evangelicals. While others, even some Republicans, seem embarrassed by what Christians stand for, Trump's adamance stands out.

“We will not allow faithful Americans to be bullied by the far Left,” he insisted to roaring applause. “We're not going to allow it…” There are those, he pointed out, “who say these sacred beliefs are outdated. But we know they are just the opposite. Our traditions and our values are timeless and immortal. [The political Left doesn't] know what they are missing. Our faith is needed now more than ever.”

Those aren't exactly views his 2020 opposition shares. Trump did more than hint at the contrast, reminding the crowd that “every Democrat candidate running for president is trying to punish religious believers and silence our churches and our pastors. Our opponents want to shut out God from the public square so they can impose their extreme anti-religious and socialist agenda on America.” If conservatives stop them, he believes, it will be because the country's faithful got involved.

“In 2016, evangelical Christians went out and helped us in numbers never seen before… I really believe we have God on our side… or there would have been no way that we could have won,” Trump told the crowd. “People say, 'How do you win? You don't have the media. You have so many things against you.' And we win. So there has to be something.”