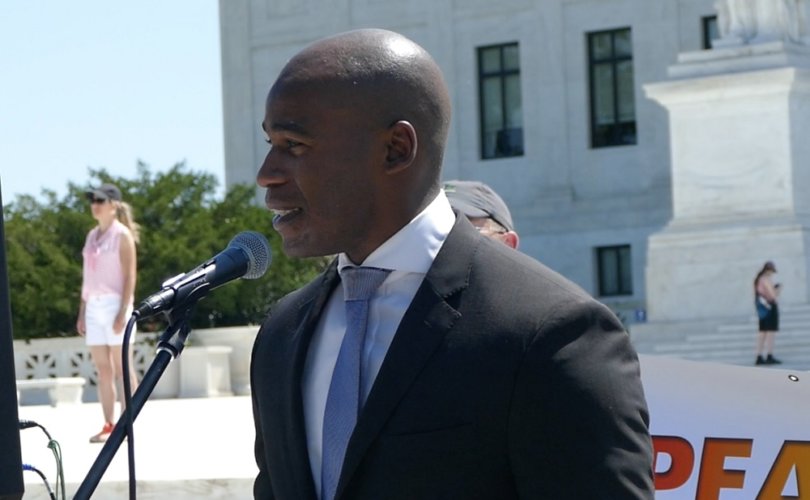 Today, June 26th, will always be marked as a day when this court attempted to rewrite millennia of human history and dismantle the granite cornerstone of society in favor of an experimental construct that was deeply flawed.

The court played lawmaker with Obergefell, a decision which has been used since then to stretch the bounds of what is well-ordered and decent and defendable in society: the family.

It has taken the very definition of marriage and made it ambiguous. And then replaced it with a social construct. And now it seeks through the Equality Act to use the force of the federal government to rewrite basic biological norms and to trade privacy and safety for junk science and jurisprudential perversion.

The only benefit to this deeply flawed decision is that it sounded an alarm to freedom-loving Americans. It put us on alert, it awakened us, it acted as a witness — an external manifestation of where a culture would be if law, if a faction within the culture, wanted nothing more to do with religion. It told us what would happen when the guiding morals of religion were no longer desired and if faith were to no longer to have a protected place in guiding society’s ethics.

If Obergefell was good for anything, it let us know what our culture would be like if religion was removed.

A hearing on the Hill just yesterday, right across the street, demonstrates this point, as legislators seethed at the opportunity to decry the so-called ills wrought out by religion as they challenged the Religious Freedom Restoration Act in a committee hearing — a hearing which, at its core, like the Obergefell decision, was just another attempt to tear down what is well-ordered, what is defendable, and decent in society: the principles of faith.

And as warned by the good justices who dissented in the Obergefell decision, the end goal of the LGBT agenda is to limit our teaching and our advocacy, to limit it to the four walls of our churches, and to render it silent in the privacy of our homes.

That’s what the anti-family agenda seeks to do.

And it will take more than just a shaky, half-baked, shallow opinion to compete with the solid rock and firm foundation of Truth.

But don’t just take my word for it. Listen to the words of Kim Davis, the Kentucky clerk who defied the order from this court and refused to issue same-sex “marriage” licenses on the day the decision was rendered:

I was not about to violate my conscience just because five attorneys who wear robes thought I should.

Whatever the cost, I said there is no way I would issue same-sex licenses. For me, this was a heaven and hell decision. It was black and white, there was no grey at all, no room to straddle the fence.

And while Ms. Davis did feel sorry for inconveniencing some, she did not apologize for the Word of God — a defense of her beliefs that ultimately led her to be thrown in jail.

Our client, Kim Davis’s, story became an archetype as many more around the country are emboldened in the same manner to do what she bravely did that day and what we are doing once again here today: challenging the power of this court to place any law above the Laws of Nature and Nature’s God — and, like her, being prepared to suffer the consequences, wherever and whenever they may come.

Unfortunately, the proponents of the LGBT agenda are also motivated by this garbage decree and they have sought to enshrine in our laws further erosions of religious liberty to promote a culture which places same-sex lifestyle above God’s design for marriage.

In their latest attempt, the so-called Equality Act, is a proposal which hijacks true civil rights and places sexual orientation and gender identity as a protected class as if to make it similar to race.

It’s a proposed law that has already passed in the House of Representatives, and it intends to gut religious liberty protections while it promotes the LGBT agenda, forcing conformity to all their radical culture-changing goals while seeking to crush dissent all along the way.

That the lawlessness that Chief Justice John Roberts warned of in his dissent.

That’s what freedom-loving Americans are up against.

But that, my friends, is the very place where we have chosen to take our stand.

Even if it means that we are called names, we will take a stand.

Even if it means that all manner of evil is spoken against us, we will take a stand.

Even if it means that we are hauled before magistrates and judges and before this very court, we will continue to take a stand, like we are doing today.

We will withstand the boos and the hisses, the scorn and the mocking, because we’ve developed a resilience born through endurance.

Because although the Obergefell decision is merely four years old, Truth is ageless.

And our ultimate goal of restoring Faith, Freedom, and the Family is everlasting.

Jonathan Alexandre is senior counsel for government affairs for Liberty Counsel Action, where he consults with and advises law- and policymakers at the federal, state, and local levels across the nation.