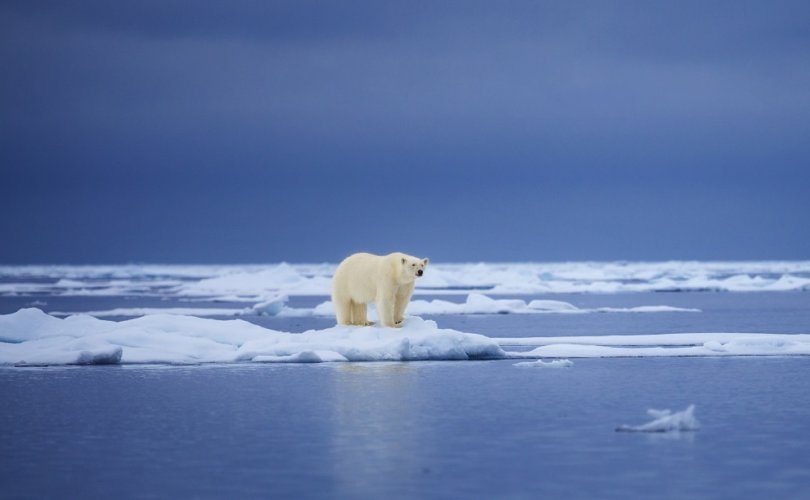 Editor’s note: This article is the second part of a series. Click here to read the first part.

Our investigation continues into how the incessant propaganda campaign on climate change has distorted the public’s perception of reality. The first victim of climate change is nature, or to be exact, what we think about nature. We have been led to believe that nature is static and its equilibrium is destroyed exclusively by human presence and activity. We are under the illusion that no change is the norm, like a frozen image that persists to infinity. But this is not the case. Nature is dynamic, it is constantly changing, there is never a season exactly the same as another, and the climate has always changed. We are being brainwashed by a vision rooted in atheism. Regrettably, the Catholic Church has now joined in the chorus.

The first victim of the incessant propaganda on climate change is nature, or more precisely, what we think about nature. We live in terror of every small sign of change in the weather because collectively we are convinced that nature is static: that it has a definite point of equilibrium which humans — by their presence and activity — have knocked off balance. But climate change, far from being a new phenomenon, the consequence of human iniquity and a harbinger of unimaginable catastrophes, is normality.

Without even taking into account, the five ice ages that characterise the history of the earth well before human beings, just in our era there have been at least four glacial periods (marking significant glacier expansion) interspersed with interglacial periods (lasting 10–12 thousand years). The current era counts as one of these and is approximately 10,700 years old to date. But even interglacial periods are not uniform: just referring to relatively recent history, climate historians recognise periods of warming at the time of the Roman Empire and in the Middle Ages (incidentally named “optimum”), and periods of cooling. The most relevant record noted between the sixteenth and nineteenth centuries, was referred to as the “little ice age.” The mid-nineteenth century saw the beginning of a new warming period (still in action), which in the last 160 years has produced an increase in average temperatures between 0.8 and 1°C.

But even this latest period of warming is not linear: an increase in global temperatures on the ground between 1850 and 1878 (+0.5°C) is followed by a phase of decrease (in 1911, -0.2°C compared to 1850) and then a new increase until 1945 (+0.5°C compared to 1850). This is followed by a new cooling period that lasts until 1976, when the temperature is just 0.1°C higher than that of 1850. Yet, we recall that in the mid-1970s there were continuous alarms about global cooling. Nonetheless, the temperature started to rise again until 1998 (+0.85°C). Since 1998, variations are minimal and despite constant alarms about the hottest months and years ever, the temperatures have substantially remained stable.

Even if no research on climate cycles existed, we should all know that seasons vary from direct experience; that within a specific climatic zone, there are continuous variations and sometimes extreme events. Thinking about how wines are classified by their year of harvest affirms that each season is a story in itself.

Yet today, the continuous campaigns on global warming drive us to pretend that nature is invariable. If the news informs us that this week the temperature is higher than the seasonal average, everyone panics: we will be roasted, we will be submerged by water. But these news reports, intended to create alarm, do not say that the seasonal average is only a calculated statistic which does not correspond to what the temperature should be.

Leaving aside the debate on how much the increase in temperatures is due to natural cycles and how much to human activity — for which there is no definitive proof — the fact remains: we no longer consider that nature is dynamic. We witness public events and major political initiatives against climate change, even though we know that climate change is the norm. Proposals which would have sounded absurd in the recent past and considered worthy of psychiatric treatment today are taken seriously and considered the most important issues facing humanity.

This dramatic distortion of how we perceive reality — clearly the intended outcome of those manoeuvring the “climate” theme — is undoubtedly facilitated by the fact that people are less in contact with nature. In Europe, for example, about 75% of the population live in urban realities, practically divorced from any relationship with nature. Above all the younger generations — born and raised in environments where any type of fruit and vegetable is available all year round and food is already cut and ready to consume at the supermarket — lack direct knowledge of natural cycles and what are the basic laws of nature.

Yet, there is an aspect that remains constant in the relationship between people and the climate which is linked to how people view the world and their destiny. A quote from a sermon by St. Augustine from the fourth century explains this very acutely: “See how things are. We live in bad times. Also, our fathers deplored having to live in bad times and the fathers of our fathers. No one has ever liked the times they have had to live in. But those who age, miss the old days. Every year for the most part we say, when we feel cold: ‘It has never been so cold’. Or we say: ‘It has never been so hot.’ Bad times! But are these times, connected to the movement of the sun,  really that bad?”

In the past scientists — mostly Catholics — studied climate change by observation to try and understand the laws of nature, so that methods to adapt and protect human communities could be improved. We recall for example the abbot and scientist Antonio Stoppani (1824–1891) who, in his most famous work — Il Bel Paese — linked the retreat of the Alpine glaciers to the warming of the second half of the nineteenth century. He wrote a description of the event in his attempt to explain the phenomenon from a scientific point of view. He raised no alarm nor saw cause for concern that the Alpine snows were melting, probably because not long had passed since the Mont Blanc glaciers were so extensive they threatened the habitations in the valleys below.

In 1881, Stoppani gave a highly successful lecture at the Lincei  Academy, “On the current regression of glaciers in the Alps.” At the conclusion, when King Umberto of Savoy, present at the lecture, showed concern for developments, Stoppani told him, “Don’t worry, providence will take care of it.” Rather than fatalism, he showed a profound knowledge of reality. Not without reason today, climate alarmism and the claim to be able to regulate the temperature of the earth as if we hold a thermostat in our hands, coincides with the cancellation of God from history and is substituted with the presumption that man is the master of the cosmos and history. If there is any novelty and real change of particular note, it is that even members of the Church embrace this atheistic view.