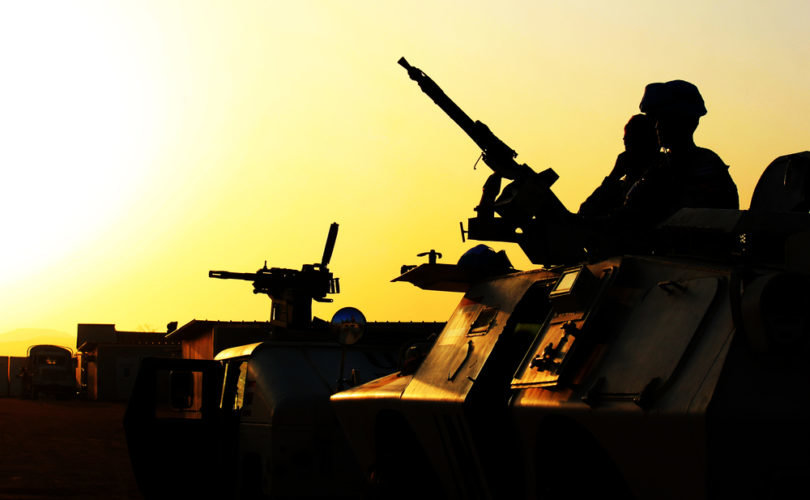 “We pray for an end to senseless violence and dawn of peace and reconciliation among all members of the human family.” – Pope Francis: August 25, 2014

The slaughter of Christians and religious minorities in Syria and Iraq by a group known as the “Islamic State” is horrific news. Images of crucifixions, beheadings, the burials of living women and children, and other gruesome executions of the innocent seem surreal.  Hearing about these atrocities is awakening many to this emerging, though not new, evil. Pope Francis has condemned the violence on more than one occasion, calling the faithful to pray for an end to the violence.

Who would think that censoring these violent images would enable us to better understand the men who chose to commit these evil acts? Should we see perpetrators in a more caring context in order to “humanize” them, and set aside any judgments of what they actually do?

The risk of such false “humanization” is in its denial of the humanity of their victims. Taxpayer-funded PBS stations recently aired After Tiller, a documentary created to “humanize” four of the doctors in the United States who kill viable babies in the womb. After Tiller, its producers tell us, was intended to get beyond the politics of the “complicated” issue of abortion, past the heated language of the debate. It humanizes the doctors as persons who are just trying to “help” women, even as they risk being killed by pro-life Christians.

Although it can be instructive to understand the motivations of people who perpetrate evil, we can never ignore evil in order to “understand” the issue that unites them.

The entire abortion industry is built on hiding not only the images of the boys and girls who are killed, as was done again in After Tiller, but on hiding the physical, emotional and spiritual harm done to women. How women’s health advocates can continue to get away with this astonishes me. There is very little debate (except among the profiteers of abortion) about the correlation between abortion and dramatic increases in mental health problems, and even breast cancer. And how many people have come into the pro-life movement when they finally saw for themselves what actually happens in an abortion, or experienced its effects? It has to be in the tens of thousands.

The disturbing images that we are now seeing of the victims of the Islamic State are finally moving people to action. If we were to see the images of babies killed in late term abortion, we would also see action across political and religious lines.

As the Culture of Death seeps deeper into the fabric of society — specifically the acceptance of anti-life values like contraception, abortion, euthanasia, and non-traditional families — instability and violence increase as a result. Violence against women, elderly, unborn, and the disenfranchised seems unconscionable and surreal, yet we see such atrocities occurring in all regions of the world.

Our response must begin with prayer.

Prayer is a battle against ourselves and against the wiles of the tempter who does all he can to turn man away from prayer, away from union with God. We pray as we live, because we live as we pray. If we do not want to act habitually according to the Spirit of Christ, neither can we pray habitually in his name. The “spiritual battle” of the Christian’s new life is inseparable from the battle of prayer. (CCC 2725)

Along with prayer, we must form ourselves in the truth about the dignity of every human life, and about the nature of evil, asking God for the courage to fight it wherever we are, in whatever state of life.

Pray that those with political power will seek real wisdom in stopping the violence of the Islamic State. Pray that the violence of abortion will also come to light and that hearts and minds will be changed. But let our prayers also move us to action in defending life in our own communities, politically, and in every other way possible.