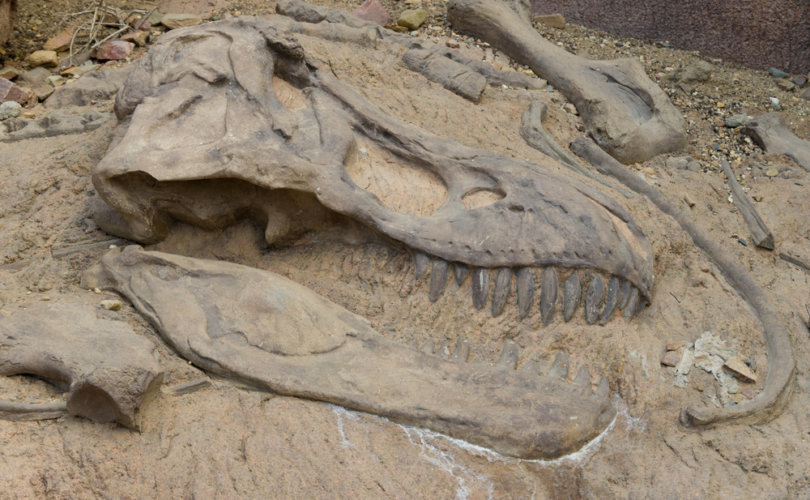 September 14, 2016 (BreakPoint) — There’s an old story about a chemist, a physicist, and an economist stranded on a desert island with nothing to eat but a can of soup. Puzzling over how to open the can, the chemist says, “Let’s heat the can until it swells and bursts from the buildup of gases.” “No, no,” says the physicist, “let’s throw it off that cliff with just enough kinetic energy to split it open on the rocks below.” The economist, after thinking a moment says, “Assume a can opener.”

There’s more than one trade that deals in assumptions. The way Darwinists approach the origin of life is a lot like that economist’s idea for opening the can. The Darwinian mechanism of mutation and natural selection explains everything about life, we’re told—except how it began. “Assume a self-replicating cell containing information in the form of genetic code,” Darwinists are forced to say. Well, fine. But where did that little miracle come from?

A new discovery makes explaining even that first cell tougher still. Fossils unearthed by Australian scientists in Greenland may be the oldest traces of life ever discovered. A team from the University of Wollongong recently published their findings in the journal “Nature,” describing a series of structures called “stromatolites” that emerged from receding ice.

“Stromatolites” may sound like something your doctor would diagnose, but they’re actually biological rocks formed by colonies of microbes that live in shallow water. If you visit the Bahamas today, you can see living stromatolites.

What’s so special about them? Well, they appear in rocks most scientists date to 220 million years older than the oldest fossils, which pushes the supposed date for the origin of life back to 3.7 billion years ago.

This, admits the New York Times, “complicate[s] the story of evolution of early life from chemicals…” No kidding! According to conventional geology, these microbe colonies existed on the heels of a period when Earth was undergoing heavy asteroid bombardment, making it virtually uninhabitable. This early date, adds The Times, “leaves comparatively little time for evolution to have occurred…”

That is an understatement. These life forms came into existence virtually overnight, writes David Klinghoffer at Evolution News and Views. “[g]enetic code, proteins, photosynthesis, the works.”

This appearance of fully-developed life forms so early in the fossil record led Dr. Abigail Allwood of Caltech to remark that “life [must not be] a fussy, reluctant and unlikely thing.” Rather, “(i)t will emerge whenever there’s an opportunity.”

Pardon me? If life occurs so spontaneously and predictably even under the harshest conditions, then it should be popping up all over the place! Yet scientists still cannot come close to producing even a single cell from raw chemicals in the lab.

Dr. Stephen Meyer explains in his book “Signature in the Cell” why this may be Darwinism’s Achilles heel. In order to begin evolution by natural selection, you need a self-replicating unit. But the cell and its DNA blueprint are too complicated by far to have arisen through chance chemical reactions. The odds of even a single protein forming by accident are astronomical. So Meyer and other Intelligent Design theorists conclude that Someone must have designed and created the structures necessary for life.

Meanwhile Darwinists, faced with a fossil record that theoretically pushes the origin of life back further into the past, are forced to assume the metaphorical can opener. They just don’t know how these early cells came into existence, and the more we dig up, the more improbable—rather than likely—life becomes.

For them at least.