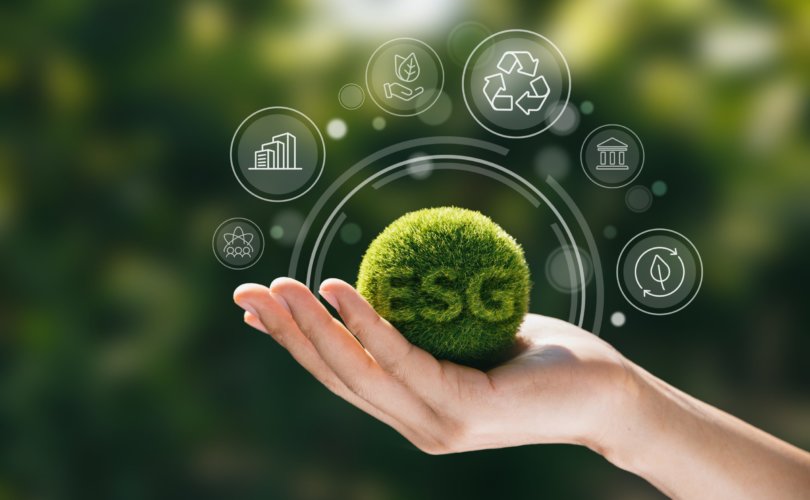 (LifeSiteNews) — A former commercial banking analyst for the Royal Bank of Canada (RBC), among the top ten largest banks globally,  has spoken to LifeSiteNews to explain how Environmental, Social and Governance (ESG) scores are forcing corporations to relentlessly push the “woke” pro-climate change, pro-LGBT left-wing narrative.

In a phone interview with LifeSiteNews, Brian Smith, a former commercial banking analyst for RBC, explained that from his perspective in the financial industry, CEOs of large corporations are essentially being “blackmailed” and “extorted” into adopting a variety of left-wing social and policy positions by the ever-growing ESG score industry.

For those unfamiliar with ESG scores, Smith told LifeSiteNews that the easiest way to understand the ESG system is to take the “Chinese social credit system” model but instead of applying it to individuals, apply it to businesses.

Essentially, groups like the Sustainability Accounting Standards Board (SASB) assign numerical scores to companies based on their environmental friendliness, their social awareness and their internal governance practices.

As an example, if a bank or other company were to be heavily invested in oil and gas, that would be reflected in a poor “E” score in their broader ESG score. In order for such a company to increase their “E” score, it would have to either sell some of its holdings in oil and gas, invest more heavily in so-called “green” energy, or both.

While this may seem like a niche attribute of the contemporary business model, the ESG system actually has massive scope and influence, with companies like Microsoft, Salesforce, Motorola, Adobe, Nike, Mattel, Rogers, Apple and hundreds of others having publicly-viewable ESG scores indicating what is effectively their “wokeness” level.

According to Smith, the ESG system is not just being promoted by firms like the SASB but also being weaponized by a variety of institutions that are using the ESG system for their own political and social ends.

Included in this list of ESG actors are large fund managing firms like the world’s two largest asset managers BlackRock and Vanguard, and even governmental agencies like the U.S. Securities and Exchange Commission (SEC).

In layman’s terms, Smith outlined that CEOs are essentially being told that a failure to increase their ESG scores – by going “green,” spending money on “diversity and inclusion,” and other familiar left-wing metrics – will cause the ESG scores of their companies to fall below the acceptable industry threshold.

Smith told LifeSiteNews that with the way the industry currently operates, large stakeholders and fund managers – BlackRock, Vanguard and State Street as notorious examples – can collectively own such massive portions of these publicly-traded companies, that if they were to collectively sell all their holdings in a company, the company would be at risk of a “liquidity” crisis as the mass exodus of investment would cause the share price to crash.

In effect, according to Smith, CEOs and other executives are being told by these large fund managers that if their ESG scores fall below a certain number, these managers will have no choice but to sell their shares and allow the stock price to plummet, putting the company’s financial future in jeopardy.

Not wanting to lose a “7-figure job” by being ousted by their board members, Smith says that these CEOs are instead opting to bend the knee to these ESG architects in an act of desperate self-preservation.

‘Oh, so you’re not against diversity and inclusion?’

In one jarring example of how this ESG-tyranny practically applies to the day-to-day operations of these “woke” corporations, Smith told LifeSiteNews that while working for RBC during the “height of COVID,” the company invited him and the rest of the staff to an online “drag queen bingo night.”

RBC had told its employees that they could have alcoholic beverages delivered to their homes as well as food, free of charge from the company, if they were to “attend” the event.

Opting out, Smith was “called by somebody in the bank’s diversity department” the next morning and was asked why he was “not at the drag queen bingo hour last night.”

Explaining that he had a more pressing engagement that night, the diversity worker remarked, “’So, you’re not against diversity and inclusion?’” he recalled.

Relaying this story, Smith told LifeSiteNews: “Look what they can do [in the name of ESGs]. They can buy food and alcohol for all their employees and they can chalk it up to, ‘This is money we spent on our social ESG,’ and make everybody happy.”

Smith explained that such an expenditure, which would normally be unwelcome by banking regulators and is certainly contrary to the “fiduciary duty” companies have to their shareholders, is nonetheless pushed in companies because of the so-called benefit it provides the company when it comes to the “S” rating on their ESG score.

Hosting an expensive “drag queen bingo night” allows RBC to report that they spent thousands of dollars “promoting diversity and inclusion in [their] own corporation,” thereby boosting their “S” score and becoming more favorable to large-scale commercial investors.

According to Smith, large corporations are sinking millions of dollars into boosting these contrived ESG scores instead of using money given by investors to increase profits or grow the company.

Smith says this type of system has all but removed the say of “Joe Q. Public” (the individual shareholder) in favor of massive corporate stakeholders, who are able to use their collective wealth to force companies to push their agenda.

ESG scores and the government

It is not just non-governmental actors like BlackRock or the SASB that are pushing the adoption of ESG scores, but governments themselves.

In fact, Smith pointed LifeSiteNews to the SEC’s May 2022 statement on “Environmental, Social, and Governance Disclosures for Investment Advisers and Investment Companies,” in which the financial investigation committee raised concerns over so-called “greenwashing.”

The term “greenwashing,” as can be inferred, is when a company misrepresents their “greenness” as a way to market themselves as more environmentally-conscious than they actually are.

“This concern is real because advisers can mint money by calling their products and services ‘green’ without doing anything special to justify that label. Only days ago, we settled an enforcement proceeding in which we alleged that an adviser said one thing about ESG and did another,” SEC Commissioner Hester M. Peirce wrote in the statement.

READ: Companies are being forced to take a stand on moral issues like abortion even if it’s bad for business

“Yet while enforcement proceedings of this sort illustrate the problem, they also show that we already have a solution: When we see advisers that do not accurately characterize their ESG practices, we can enforce the laws and rules that already apply,” she added.

As explained by the ESG commissioner herself, there are already laws on the books that allow the SEC to investigate and take action against companies who are misrepresenting their “greenness.”

Smith told LifeSiteNews that, in his own experience, he was told that investment in hydroelectric power was not considered to be “green” by the ESG apparatus, explaining that the ESG actors are constantly “moving the goalposts” as they see fit, in order to achieve their desired outcome.

It is not just the American SEC that is involved in the investigation and prosecution of ESG violators, but international agencies as well.

As reported by German news outlet Deutsche Welle in May, “Prosecutors in Frankfurt raided the offices of both Deutsche Bank and its asset management subsidiary DWS on Tuesday as part of an investigation into so-called ‘greenwashing.’”

“Prosecutors say investigators have already found ‘sufficient indications’ that ESG (environmental, social and governance) standards were applied only ‘in a minority of investments,’” DW added.

What does this mean for the future?

While there has already been pushback against ESGs by 19 attorneys general in America, as well as Florida’s Republican Gov. Ron DeSantis, Smith warned LifeSiteNews that if the system continues it will only further erode true capitalism.

As the “goalposts” continue to tighten, Smith says the ESG system is effectively creating a top-down system of corporate control, in which individual shareholders and the public are completely left out of the discussion.

Smith surmises that until investors engage in large-scale class-action lawsuits against these companies – for misusing their investment by wasting money on climate change and social activism as opposed to actual business expenditures – the system will likely only continue to grow in scope and influence.

Summing up the issue, Smith said the ESGs’ top-down, hyper-centralized method of operation is, in essence, the “opposite of the Catholic principle of subsidiarity,” which teaches that “a community of a higher order should not interfere in the internal life and community of a lower order.”