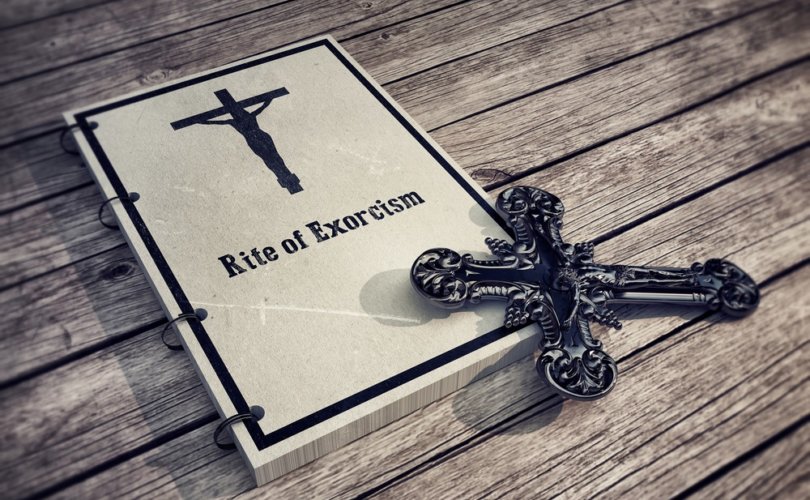 April 28, 2020 (Daily Compass) — “Priests today say Mass too quickly;” “They don’t understand that when they celebrate Mass, She (Mary) is present at the altar and the angels with her.” Paradoxically, this is Satan speaking out about Holy Mass while being exorcised. The compelling account of this exorcism is circulating on YouTube in a recording (Italian) by the exorcist Don Ambrogio Villa; it’s the tale of a homily. Although uploaded a few months ago, it already counts hundreds of thousands of views and has made ‘Villa’ a popular household name.

Don Ambrogio was the local parish priest of a small town in Lombardy, that is until he began to work full-time as an exorcist for the Milanese Diocese in Northern Italy a few years ago. He is one of many priests across the globe, who have responded to the increasing need for exorcists. According to a report from 2018, in just the Vatican’s home Italy, exorcisms have tripled with approximately 500,000 performed every year. Waging a spiritual battle against the devil is not a role for the faint-heartened, explains Don Ambrogio. Even if you are in persona Christi, the devil subjects you to “vulgarity, threats and violence.” Yet, he stresses in the recording, what demons are constrained to reveal in certain moments during an exorcism is an “authentic Catechism” which if heeded could make the difference to lives and souls.

In the end, there is nothing surprising about this; it also happened with Jesus. Christ was the first exorcist and exorcism was an integral part of His public ministry. Jesus’ encounters with the demon-possessed,  His power to cast out demons and their confessions in His presence, are described in several passages in the gospels. In Mark, for example, they are the only witnesses who publicly recognise Jesus as the Messiah. And in Mark, 1:24, a demon addresses Jesus with these words,  “What do you want with us, Jesus of Nazareth? Have you come to destroy us? I know who you are — the Holy One of God”! Demons feared being in the presence of Jesus because they knew he had the power to change their lives by exorcism.

In fact, exorcisms usually change the life of the possessor and possessed but Don Ambrogio recounts that his life too has been radically reformed by the devil’s revelations. What makes this encounter unique, is the devil’s answer when prompted to speak about priests; he evidently has a score to settle: “You (priests) say Mass too quickly, you raise that piece of bread and immediately put it down, you are in a hurry, because you have more important things to do.” Shocking words that lead Don Ambrogio to admit, this is as much about him as anyone else. His first consideration, confirming the devil has a point, is to “no longer say mass as he has been”. Volumes have been written on the subject of the liturgy but evidently, a problem persists. Even Benedict XVI addresses the subject in From the Depths of Our Hearts. The Pope Emeritus writes ‘the daily celebration of the Eucharist, implies a permanent state of service to God’ which ‘indicates the Eucharist as the centre of priestly life’. But according to the devil, that privileged sacramental relationship between the priesthood and Holy Mass is constantly being devalued.

According to Don Ambrogio, it wouldn’t be an unfair exaggeration to say “Mass is no longer valued”. He explains his point: “We all think we are donating something to God by going to Mass, instead, it is Christ’s sacrifice who forgives our sins.” We forget that “the first motive for going to mass is to be saved and forgiven.” What’s more, he stresses, “that little piece of unleavened bread goes in to our stomach and before our gastric juices disintegrate it, 8 to 10 minutes pass…we are a tabernacle for Jesus … Our Creator is in us and before us … and we still forget to give thanks for this sacrifice” before and after mass.

But there is more and the devil addresses priests with a second grievance, this time he discloses something extraordinary. “You don't understand, that when you say Mass, Mary His mother and all the angels are there gathered around the altar.” It’s true, we don’t even consider that “all of heaven is gathered around Christ’s sacrifice” at the altar, continues Don Ambrogio. Yet this isn’t the first time divine presence at the altar during the consecration has been mentioned. For example, the late Bishop Girolamo Grillo of Civitavecchia officially recognised all the apparitions and messages of Civitavecchia including Fabio Gregori’s description of the first time Mary appeared to him. This is Fabio’s testimony: “It was July 2, 1995. I was at afternoon mass. It was about 18:30. Our Lady appeared at the moment the parish priest was about to consecrate the sacred Host. Her feet rested on a cloud, exactly above Father Paulo and her hands held open were pointing downwards. She stayed there in silent adoration until communion.  From her behaviour, it was clear that her Son Jesus, the Saviour, is truly present and alive in the Eucharist.”

Trying to make sense of shrinking congregations and youth who say “Mass doesn’t do anything for me anymore”, don Ambrogio has found his answer. Listening to the devil he says, has “changed my life forever”. If  Mass is celebrated and participated with the reverence it’s properly due “our thirst will be quenched”. When God is not served well and when the holy sacrifice of the mass is devalued, the majesty of God is lost and we are lost too.

Ironically, at a time when the Church seems lost in a perpetual state of confusion, the devil knows what we need: a Holy Mass.

Published with permission from the Daily Compass.