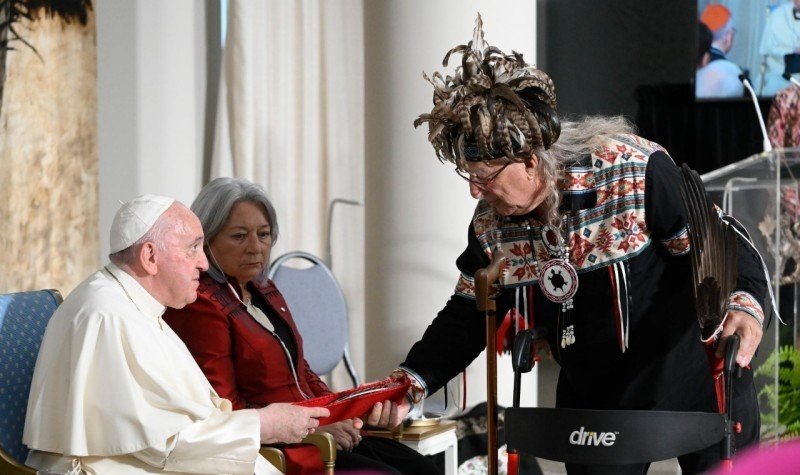 Pope Francis receives a ritual feather from an indigenous elder, Quebec City, Canada, July 27, 2022, on the day he participated in a smudging ceremony.YouTube Screenshot/Vatican News

(Family Life International) – Although elements of paganism have been creeping into various parishes and dioceses for some time, the blatant idolatry on display during the 2019 Amazon Synod really opened the floodgates. Since that time, faithful Catholics in the West have been inundated by indigenous emblems, prayers and rituals in what appears to be an attempt to change the Church’s very identity.

In Australia, that trend is quite evident, and the focus on Aboriginal culture which is being promoted politically and in the corporate world, is being mirrored by the Church. When too much attention is given to another form of spirituality, there is always a risk that the pre-eminence of the Catholic faith will be overlooked. However, that is not the extent of the problems facing an institution that is starting to view pagan ceremonies as interchangeable with its own rituals.

Many, including Family Life International (FLI), have expressed concern about the spiritual consequences of participation in indigenous rituals. Given that a non-Christian ritual, by its very nature, invokes spirits other than that of the One, True God – that is, it invokes demons – it seems implausible that there would be no evidence of spiritual bondage or oppression among its participants.

FLI sought counsel from that group of experts who sees the devastation of spiritual warfare on a daily basis: Church-appointed exorcists. What they revealed confirmed our worst suspicions.

Father John Rizzo, former exorcist of the Diocese of Parramatta, has had years of experience in delivering unfortunate souls from demonic attack. In the two weeks before he spoke to FLI, Fr. Rizzo had been contacted by three families whose children are at two different schools. Each family wanted his assistance because a child was exhibiting disturbing symptoms that the parents believe are linked to indigenous smoking ceremonies.

Children have become irritable after being involved in such situations. Students at some schools are forced to walk through the smoke against their will. Their well-informed Catholic conscience makes them feel uncomfortable! They know that it’s wrong!

The priest said that he has been seeing “…a certain moodiness and a type of fear that is hard to understand.” Thankfully, he has found that minor exorcisms, which can be prayed by any priests, are proving effective in liberating the children.

“I particularly use the exorcism prayers from the traditional rite of Baptism,” he said. “I recite them in Latin first, and translate afterwards into English.”

The mother of one of the children, Jane, (not her real name) opened up to FLI about her family’s experience:

My son was attending a Catholic school, where smoking ceremonies were being performed quite frequently. He had also been exposed to regular smoking ceremonies at the public school that he previously attended. As time went by, my son’s health declined and he began to suffer from anxiety.

For three years, Jane took her son to visit various medical professionals who were unable to diagnose his problem. All they could offer was medication to help with his symptoms – but there was no cure. Things then escalated to the point where, out of fear, the boy was unable to sleep.

My son is naturally quiet, and he was at first unable to explain the reason for his inability to sleep. He eventually told us that about a week before, he had been visited in the night by a shadowy figure which screamed at him and pinned him down to the bed. When my son started to pray, the figure went away.

Although it didn’t return, the boy was terrified that it would come back and asked his mother to pray the Rosary with him in his room before bed. The whole family was losing sleep by this time, as the boy was too afraid to be left alone at night.

When Jane’s son told her about the sleep paralysis, she feared that there was a supernatural cause to her son’s problems and contacted Fr. Rizzo. After lengthy questioning, Fr. Rizzo determined that the boy was suffering from a minor demonic attack. The priest heard the boy’s confession, administered Holy Communion and prayed prayers of deliverance over the boy. He immediately felt better and that night had what he described as his best ever night’s sleep.

Jane said, “He started to wear his scapular more faithfully and there is now complete peace in their home.”

Another exorcist contacted by FLI also expressed his concerns about the rituals. Father Michael Shadbolt, exorcist for the Archdiocese of Melbourne, said that while he hadn’t been approached by anyone needing deliverance after taking part in a smoking ceremony, he is concerned about their potential for harm.

“Many come to me because they are adversely affected after involvement in tarot cards and casting spells, and the smoking ceremonies are akin to this. It is something I worry about,” said Fr. Shadbolt.

These rituals are against the First Commandment and I have doubts about the consequences of calling on ancestral spirits in rituals like the smoking ceremony and the Welcome ceremony. It’s an open question and really needs to be investigated.

Fr. Rizzo also believes the rituals violate the First Commandment, specifically singling out the “Immersion” experiences which are growing in popularity among Catholic schools. According to Fr. Rizzo, “It is idolatry!”

“Immersions” involve taking groups of teachers and/or school children to Aboriginal sacred sites so that the traditional culture and spirituality can be experienced. Their proponents say that the function of Immersions is to “feel the deep spirit of the land” and to “immerse the children’s spirits into the land.”

Immersions are a feature of the controversial “Fire Carriers” programme which runs in more than a hundred Catholic schools around Victoria. “Fire Carriers” was designed to indoctrinate children with Aboriginal history, culture and spirituality to promote “Reconciliation,” but operates to the detriment of their Christian formation. Under the guise of promoting racial harmony, it undermines the Catholic faith while turning children into political and eco-activists.

According to guidelines given on the Sandhurst Diocese’s website, when a school joins the program, it signs a covenant promising to respect the Aboriginal people’s “spiritual connection to Mother Earth through the Dreaming” and children are expected to participate in activities such as “consulting with Aboriginal people to enrich their spirituality,” honoring the “Aboriginal significant days through prayer” and performing “Aboriginal rituals in Mass and prayer.” (For more information on the Fire Carriers, see this video made by the Archdiocese of Melbourne.)

All of these activities pose a grave spiritual danger to the children and teachers participating in them. At the very least, the entire Aboriginal programme cultivates religious indifferentism by presenting indigenous spirituality as equal to, or even superior to, the Catholic faith. But as the concerned priests mentioned here have pointed out, that is only one of the dangers posed by involvement in pagan spirituality.

Priests outside Australia are also seeing spiritual fallout after people have engaged in smoking ceremonies and other pagan rituals. The Society of the Most Sorrowful Mother, based in the U.S., is seeing similar results to Fr. Rizzo. The group offers deliverance, exorcism and other spiritual help in the Archdiocese of Colorado and is also known as the Dolorans Fathers; the well-known exorcist, Father Chad Ripperger, is a member of this group.

In response to a request, a representative of the Society told FLI that they have come across multiple instances of spiritual harm resulting from smoking ceremonies and other rituals used by the indigenous people of the United States as well as from those of other cultures. The identical experiences of exorcists across two continents is not surprising, since the smoking ceremony performs a similar function in many indigenous religions, as well as in witchcraft. Its role is to clear an area of “negative spirits” or “negative energy,” and “good” spirits are frequently invoked in the same ritual.

One commentator describes smoking ceremonies as “formal acts of superstition.” Louis Knuffke writes that “to attempt to spiritually “purify” a person or place outside the order of grace established by Christ and His Church in the sacraments and sacred rites of Catholicism, constitutes not only the sin of superstition” but when performed in a consecrated church, “would also entail grave sacrilege…”

It is scandalous that these rituals are becoming commonplace in Catholic schools and it points to the impoverished formation of both children and adults. Aboriginal spirituality, or indeed, any alternative philosophy becomes attractive in the absence of the true religion which Catholic schools are meant to be teaching.

While some parents may not care, there are many parents who simply don’t realize that their children are being exposed to ongoing syncretism and indoctrination within the Catholic school system. With exorcists now starting to see harmful results in children, perhaps parents will begin to demand more from their schools. We must wonder what it will take for our bishops to at last be convinced that the corrupted inculturation being implemented is a dangerous spiritual experiment that never should have been adopted by the Catholic Church.