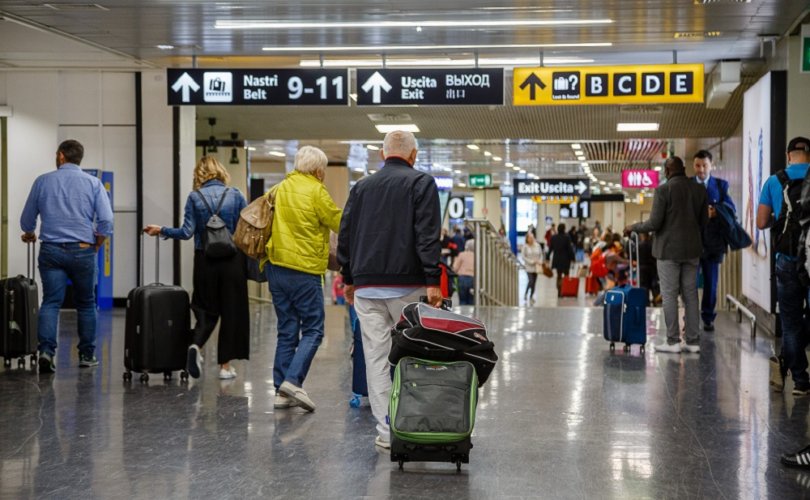 March 23, 2020 (American Thinker) — Watching cable news these days, it is difficult to know which is greater: the rise in Chinese Coronavirus cases worldwide or the panic and sense of doom for those unable to work, travel, or freely associate with others.

The media are in overdrive, under the journalistic principle of “if it bleeds, it leads.” Predictions of an exponential rise in illnesses and hospitalizations are a cable news staple this week, with many reports suggesting that America is just a few weeks behind Italy.

Rather than offering calm, USA Today warned, “Too many coronavirus patients, too few ventilators: Outlook in US could get bad, quickly.”

Referring to Italy, the publication reports, “Italy’s hospitals are choosing who gets lifesaving breathing machines and who does not.” In other words, death panels and rationing.

This is what’s ahead for the U.S., the media claim, even without Bernie Sanders’s “Medicare-For-All” scheme. “US hospitals are on the cusp of too many severely ill patients without enough intensive care unit beds and ventilators to keep those patients breathing,” warns USA Today.

What is left out of the story is why Italy has so many cases of a Chinese virus. If calling the virus “Chinese Coronavirus” or the “Wuhan virus” is deemed racist, despite a long tradition of naming infectious diseases based on their origin, we can call it the “Belt and Road virus.”

A Chinese newspaper headline from last year makes the connection: “Italy aims to develop closer trade ties with China through Belt and Road.” Business ties between Italy and China provided not just a road, but a superhighway for the coronavirus to travel from Wuhan to Milan. How’s that globalism working out?

The world has luxury handbags and clothes with labels from Gucci and Prada, but Italy has Chinese workers manufacturing those items, and now a deadly virus.

Italy has a tight Chinese connection, and not the Bruce Lee movie variety of the same name. From the South China Morning Post, “[t]he Chinese began migrating to Italy about 30 years ago but numbers have swelled in the past decade, bringing the total population to about 300,000.” A travel website shows nine inexpensive flight options between China and Italy.

A Chinese couple from Wuhan took advantage of these travel opportunities in mid-January, visiting Verona, Parma, and Rome before becoming febrile and quarantined in hospital, testing positive for the virus. How many Italians did this couple encounter in restaurants and shops?

The Wuhan virus was well known at the time, yet Italy was unconcerned, with travel and commerce proceeding as usual with China. An Italian virologist observed, “The Italian government lagged at first. It was lazy in the beginning…too much politics in Italy.”

A few weeks later, rather than social distancing, Italian officials recommended social intimacy. The woke Florence mayor encouraged Italians to “hug a Chinese.” How did that work out? How many Italians died of the coronavirus due to political correctness?

Mid-January brought the annual Wuhan Lunar New Year banquet. How many Chinese nationals living in Italy traveled home to Wuhan to visit friends and family, bringing the virus back to Italy when they returned?

Italy is also an old country, at least in terms of percentage of the population older than age 65. Italy ranks number two in the world behind Japan, with 22.4 percent of their citizens age 65 or older, the high-risk population for coronavirus deaths.

While Italy now leads the world in coronavirus deaths, passing the country of origin China a few days ago, “99% of those who died from virus had other illnesses,” according to Bloomberg. In other words, if it hadn’t been Wuhan coronavirus this month, it might have been pneumonia or heart failure next month.

Smoking is another Italian problem. Twenty-eight percent of Italians smoke, lower than China at 48 percent, but higher than the U.S. at 20 percent. Smoking is one more risk factor contributing to the high death rate in Italy.

Instead, the media blame the lack of ICU beds, not political correctness, woke Italian politicians, Italian demographics, or China’s Belt and Road running roughshod through Italy.

Italy has a great health care system, we are told. International living encourages would-be ex-pats, “Italy ranks among the World Health Organization’s top 10 countries for quality health services (by contrast, the U.S. only holds 37th place, despite being the highest spender).”

So why is Italy in such a medical crisis, leading the world in coronavirus deaths? Perhaps the U.S. health care system isn’t that bad, and we have more ventilators than the hair-on-fire media claim.

Health care policy wonks know all about the “Triple Aim” and “bending the cost curve” but are probably are not versed in how many intensive care unit beds we have compared to other countries. These critical care beds include ventilators, which approximate the number of beds.

A 2012 paper in Intensive Care Medicine looked at critical care beds per capita in Europe. Germany led the way with 29 ICU beds per 100,000 population. Italy had less than half that number at 13 beds. Interestingly, farther down was Denmark, Bernie Sanders’s ideal country, with only 7 beds per capita.

With our health care system barely keeping up with Cuba, according to health care policy expert Michael Moore, the U.S. should be pulling up the rear in this metric compared to the rest of Europe. How does the U.S. compare?

While the numbers are clearly insufficient for Italy, they may be adequate for the U.S., depending on the course of the virus over the next few weeks. With President Trump instituting a travel ban from China in late January, criticized severely at the time, the number of infected Chinese bringing the virus to the U.S., compared to Italy, was blunted, and hopefully fewer Americans will require critical care.

Italy and much of the E.U., with no such travel restrictions until recently and much too late, are swamped with cases, overloading their lauded health care systems.

Despite fear-mongering predictions from cable news, I would wager that most 80-year-olds infected with Chinese Coronavirus would rather be in the United States than in Italy, despite the World Health Organization’s opinion on the two health care systems.

While things could change, it is not likely that U.S. doctors will have to rely on death panels to decide which patients receive an ICU bed and which are told to take two aspirin and call the undertaker in the morning.

America may be better equipped to withstand this viral pandemic than the mainstream media want to acknowledge. For example, be wary of media-reported data. Increasing the number of people tested in the U.S. will artificially raise the confirmed cases.

ABC News ran this headline: “NIH director: Up to 70K coronavirus cases could be confirmed in US by end of next week.” Yes, due to more people being tested, including many asymptomatic or recovered individuals testing positive.

But they conveniently bury an important caveat to their headline.

That doesn’t mean necessarily that the outbreak has exploded at an even more rapid rate. It just means we’re now able to find out who’s out there, who is infected, because testing is now going to be much more available across the country.

In the meantime, follow current hygiene precautions, and turn off cable news. Be thankful that a fixer is in the White House rather than some political hack. The storm will pass, and the country will recover and eventually be greater after going through all of this.

Brian C Joondeph, M.D. is a Denver-based physician and freelance writer whose pieces have appeared in American Thinker, the Daily Caller, Rasmussen Reports, and other publications. Follow him on Facebook, LinkedIn, Twitter, and QuodVerum.

This article originally appeared at the American Thinker. It is published here with the author’s permission.