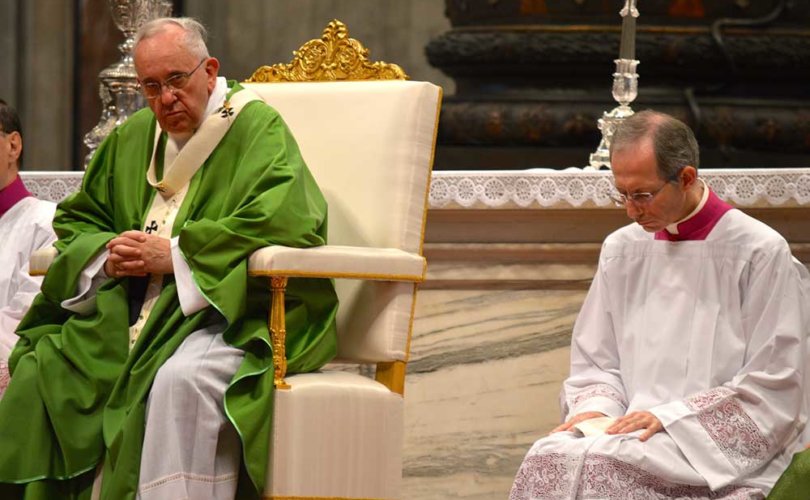 October 3, 2016 (LifeSiteNews) — As a psychiatrist with an expertise in the nature, origins and treatment of excessive anger, it has become clear to me that numerous statements and programs from the Vatican demonstrate the expression of excessive anger at St. John Paul II’s remarkable legacy and prophetic writings.

The new light shed upon Our Lord’s plan for marriage and sexuality, so badly needed in our time, has been very beneficial to Catholic youth, marriages, families, educators as well as the priesthood and the episcopacy over the past 35 years. It has begun to have a noticeable and constructive effect upon marriage preparation and the priestly vocation. Attempts at undermining St. John Paul II’s legacy are, therefore, almost inexplicable.

As we follow the continuous succession of ambiguous statements from the Vatican, it’s troubling to see the obvious anger expressed toward St. John Paul II and his teaching. This anger is not expressed in a clear and direct manner, but rather in an anger of the passive-aggressive type, i.e., anger expressed in a covert or masked way. This anger has been manifested primarily by ignoring his work, much as a spouse expresses anger in marriage by the silent treatment.

The deliberate ignoring of The Role of the Christian Family in the Modern World (Familiaris Consortio) in the recent Synods on the Family and in exhortation following them, Amoris Laetitia, shocked many Catholic marital and family scholars, and mental health professionals, like myself, whose professional work with youth, marriages and families has been enormously helped by St. John Paul II’s historic and groundbreaking apostolic exhortation, accurately described as the Magna Carta on the Catholic family.

The patent anger against the legacy of St. John Paul II, however, has become more obvious and out in the open in a number of recent actions, particularly the seriously flawed Meeting Point online sex education program for youth from the Pontifical Council of the Family that was released at World Youth Day. This program demonstrates planned ambiguity by citing some material from Theology of the Body, while at the same time acting against Familiaris Consortio and the teaching of the Church by removing the vital role of parents in the formation of their children in this area. The program initially posted was also a threat to the psychological and spiritual well-being of youth through its use of pornographic images that were similar to the pornography used by adult sexual predators with adolescents. The initial images that are meant to sexually arouse adolescents are still available for viewing (at LifeSiteNews here) and raise serious questions about the basic integrity of the MP program. Of great concern also is that this program was developed under the leadership of Archbishop Paglia who now has responsibility for the St. John Paul II Institutes worldwide.

Amoris Laetitiae, n. 280 continues the rejection of Church teaching through the support of sex education in schools and the exclusion of the role of parents. The Meeting Point and the AL, n.280, fail to understand both the risk to youth by excluding parents and the teaching of the Church. This omission of the role of parents severely damages trust in the Church. The trust in the Episcopate and priesthood has already been harmed by the crisis in the Church, described by Dr. Paul McHugh, a member of the first review board, as the “massive homosexual predation of adolescent males.”

These radically new approaches to the sexual education of Catholic youth differ totally from the teaching of St. John Paul II.  He wrote:

“Sex education, which is a basic right and duty of parents, must always be carried out under their attentive guidance, whether at home or in educational centers chosen and controlled by them,” Familiaris Consortio, n. 37.

Also, the many messages that undermine Catholic teaching have remained without clarification, such as supporting same-sex and cohabiting unions in the interim report of the 2014 Synod, and now the degrading of Catholic morality by welcoming (in however restricted a fashion) to Communion those who are living in mortal sin in the recent document from the Argentinean Bishops Conference.  Pope Francis claimed this action is supported by chapter eight in Amoris Laetitia. This position, however, directly opposes St. John Paul II’s merciful writing on this sensitive issue in Familiaris Consortio, n. 84, and 2,000 years of Church teaching, which forbid such a practice.

The Church reaffirms her practice, which is based upon Sacred Scripture, of not admitting to Eucharistic Communion divorced persons who have remarried. They are unable to be admitted thereto from the fact that their state and condition of life objectively contradict that union of love between Christ and the Church, which is signified and effected by the Eucharist. Besides this, there is another special pastoral reason: If these people were admitted to the Eucharist, the faithful would be led into error and confusion regarding the Church's teaching about the indissolubility of marriage.

The passive-aggressive anger against St. John Paul II’s legacy is difficult to understand and, indeed, causing extreme anxiety for millions of Catholics worldwide, the faithful in every vocation, who were feeling more hopeful about a renewal of Catholic marriage, family life, youth, Catholic education, the priesthood and the episcopate due to the greater understanding and commitment to the fullness of the Catholic truth on matters of sexual morality described in FC and VS.

In an attempt to understand what is occurring, I have been helped by reviewing Erik Erikson’s important work, Young Man Luther, in which he identifies Luther’s very difficult childhood experiences with an abusive father and a cold mother. Childhood anger with authority figures is not often expressed in youth because of the fears of the one or both parents.

However, as I’ve described in an APA anger textbook, anger in its early stages is associated with the sadness of a hurt, but later with pleasure in its expression.  The anger, meant for Luther’s father, would later be misdirected at the papacy, sexual morality, the Eucharist, and the Sacrament of Marriage – and was undoubtedly a source of pleasure for Luther.

This same psychological dynamic may be occurring now behind the actions against the teachings of the towering spiritual father and saint of the family, St. John Paul II, and the Church.

In the present stormy seas, when the German Bishops Conference is rejecting the teachings of the Church on sexual morality, marriage, and the Eucharist (accompanied by papal silence and support of a Protestant-style decentralization of the papacy), the Church should not turn away from St. John Paul II but rather embrace his teaching more fully in every marriage, family, youth program, parish, school, seminary, diocese and religious community.

Truly excellent work has been done to bring to all levels of the public outstanding applications of St. John Paul’s Theology of the Body (ToB), which have already been well received by Catholic families and youth. Catholics everywhere, as well as the non-Catholics worldwide that follow Catholic teaching with interest, deserve a defense and development of St. John Paul II’s teaching in this and other matters, and must resist current covert attempts at burying it, along with Familiaris Consortio, by those who are angry or resentful of their natural authority.

The time has come to bring to an end the recent confusion caused by deliberate and planned ambiguity.