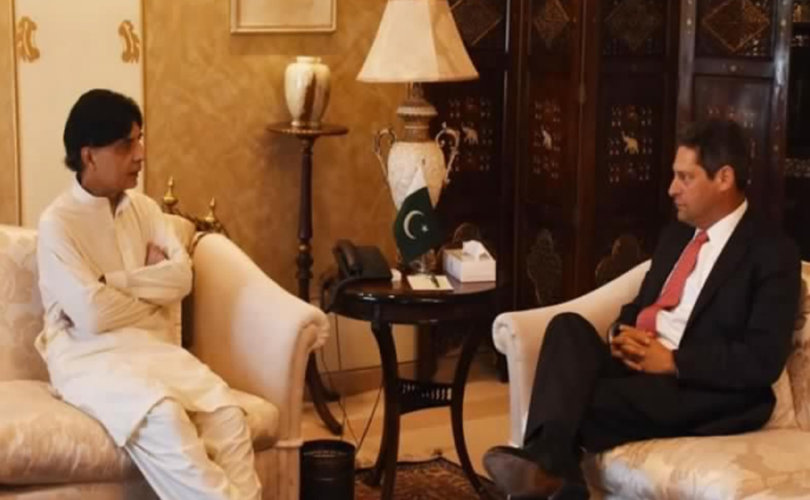 July 19, 2017 (Jihad Watch) – This initiative is already in full swing: in mid-February, traffic to Jihad Watch from Facebook dropped suddenly by 90% and has never recovered. We do not post any “explicit, hateful and provocative material that incites violence and terrorism,” but Facebook is acting as judge, jury and executioner in all this. There is no appeal and no recourse. This is at heart a Sharia endeavor, an Islamic supremacist attempt to compel the West to adopt Sharia blasphemy laws forbidding criticism of Islam, and it’s working well.

How did Joel Kaplan, a Western liberal, feel while sitting there in Islamabad with Chaudhry Nisar Ali Khan, listening to Khan tell him about “the madness unleashed against Islam and holy personalities in the name of freedom of expression”? Does Kaplan know or care about the importance of the freedom of expression to free society? Did he feel any sense of irony in having gone into a business dedicated to communication and now having traveled halfway around the world to assure an official of one of the most illiberal governments on earth that his company would do all it could to restrict communication?

Or was he just thinking about the bottom line, and when his flight out was?

ISLAMABAD: The Facebook management has assured Pakistan that it will remove fake accounts and explicit, hateful and provocative material that incites violence and terrorism.

The commitment was given by Vice President of Facebook Joel Kaplan who called on Interior Minister Chaudhry Nisar Ali Khan on Saturday.

Facebook has reiterated its commitment to keep the platform safe and promote values that are in congruence with its community standards.

Giving details of the meeting, an interior ministry spokesman said that this is for the first time that a senior member of Facebook, dealing with Global Public Policy, has visited Pakistan to discuss a way forward towards addressing the issue of misuse of social media platforms.

The interior minister, the spokesperson said, has been playing a proactive role in engaging the internet service providers and finding solution to the issue of misuse of social media.

This also included convening of a special meeting of the ambassadors of the Muslim countries in March on a single-point agenda to discuss blasphemous content on social media and how to effectively raise voice of the entire Muslim world against the madness unleashed against Islam and holy personalities in the name of freedom of expression.

This was followed by a meeting of the minister with OIC secretary general in April on this issue.

The spokesperson said that while talking to the Facebook vice president, Nisar said that the entire Muslim Ummah was greatly disturbed and has serious concerns over the misuse of social media platforms to propagate blasphemous content.

“Nothing is more sacred to us than our religion and our holy personalities,” the minister observed.

He said that the government of Pakistan firmly believes in freedom of expression but cannot allow anyone to misuse social media for hurting religious sentiments or undertaking unlawful activities….

This article was originally published on Jihad Watch and is republished with permission.

Facebook CEO: We can play the role that churches once filled

Facebook censors videos of ‘violent death’, but not abortion videos

Remembering Grayson, anencephalic baby banned from Facebook whose short life impacted so many