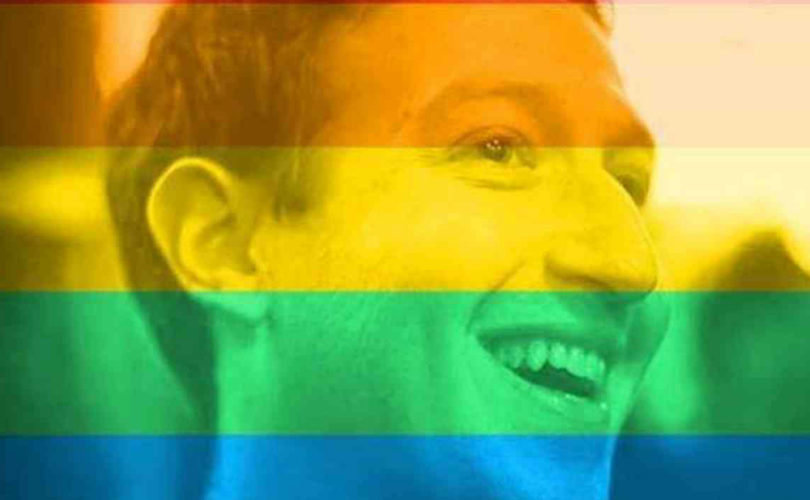 June 30, 2015 (Culture Witness) — Facebook has launched a new “Celebrate Pride” tool which lets users blend their Facebook profile photo with the rainbow flag. The tool came out soon after the U.S. Supreme Court's ruling on same-sex marriage was announced last Friday, and it has become a massive movement. Within hours of the tool's launch, over a million people had changed their profile photo. It now likely reaches into almost everyone's Friend list, including mine.

I was startled at first when I logged into Facebook and saw that a few of my friends had giant rainbows painted across their faces in their profile pics. My first surprise was that some of these people were conservatives, whom I had believed supported the conjugal definition of marriage. I guess I learned something about my friends this weekend.

But Facebook's new tool also got me thinking. What else is this, but a massive conformity campaign? I look at my list of friends and breathe a sigh of relief. Only a few have done it, no big deal. But I click and look at some of their friends. There are people out there with friend lists where rainbows cover almost every face. If that was my friend list, how would I feel?

The pressure to conform is real. Back in New York, I worked in a large law firm where the majority of the lawyers were liberal. What if I were still a lawyer there, and what if I were friends with my colleagues on Facebook (as many are)? How would I feel if I were the only one who did not have a rainbow over my profile shot?

The implication would be obvious. I might as well superimpose a sign saying “The Bigot” over my profile shot. By not placing a rainbow over my profile, I could be sabotaging my career and placing my chances of promotion in jeopardy.

Social networking has enabled us to pressure each other in ways that Communists only dreamed about. Back in the Eastern Bloc, the official “neighbourhood watch” ladies had to go knock on doors and ask: “Do you have a Soviet flag to put in your window? If not, we will provide one for you.”

People weren't actually required to put these flags in their windows. But if they didn't, watch out – it was noted, and you marked yourself. So nearly everyone did it, passively and routinely – it was considered obligatory.

Today, Facebook is enabling people to effectively do the same thing. We can now place a rainbow flag in the window of our “social networking home” for everyone to see. You don't have a rainbow flag? Don't worry – Facebook will provide one for you, here it is.

It is not required or obligatory to put a rainbow flag in your Facebook window. But since you are being offered one by Facebook, you are being forced to make a choice. And if your friends are all doing it, and you are the odd duck out, then you are marking yourself, just as if that Soviet flag were missing from your window.

It is clear that social networking sites like Facebook have the potential to profoundly influence people and our entire society through the power of social psychology. Indeed, some have already accused Facebook of using the “Celebrate Pride” tool to run a giant social experiment. Facebook denies it.

But Facebook doesn't have to be running an official study on this tool; is a psychological experiment nonetheless. The rainbow flag profile is a demonstration of the power of social conformity in action, and it does not bode well for a true democracy. It is clear that Facebook, and other social networking sites, can be misused to become potent tools for any totalitarian ideology.