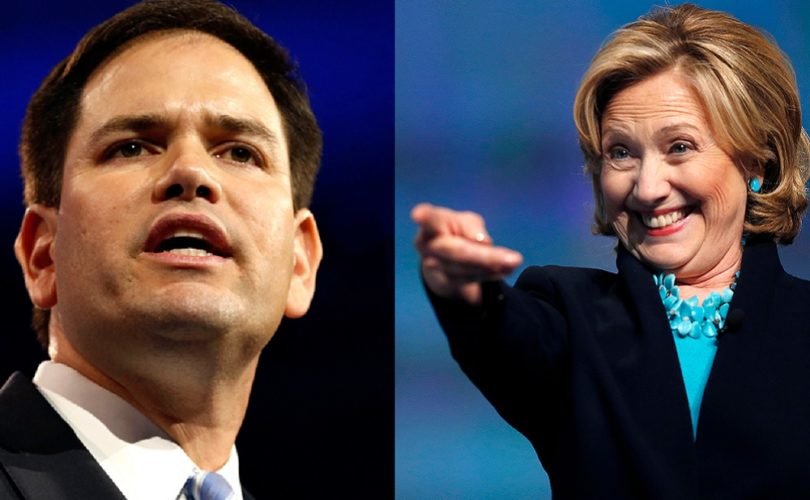 February 18, 2016 (LifeSiteNews) – During the February 6 GOP debate, Sen. Marco Rubio, R-FL, said that Hillary Clinton “believes that all abortions should be legal, even on the due date of that unborn child.”

Despite historical evidence proving this statement to be accurate in both intent and fact, PolitiFact's Linda Qiu wrote that Rubio's claim was “false,” concluding that “Clinton does not believe that all abortion should be legal. Instead, she's said she supports restrictions on late-term abortions except in cases of rape, incest and when the mother's life and health are in danger.”

As the below fact-check shows, however, it is Qiu's claim that is factually inaccurate – along with multiple issues of bias and sloppy use of terminology.

LifeSiteNews sent a variation of the below fact-check to PolitiFact editor Angie Holan, urging her to update the piece and to change the ranking of Rubio's claim from “False” to “True.” Multiple communications yielded no response by press time.

Clinton does support abortion until the day of birth

According to Qiu, “Clinton has said she could support restrictions on abortions in the third trimester (about week 28 of a pregnancy) if the mother's life and health are taken into account. Rubio casts this position as the equivalent of supporting abortions on the due date, but that exaggerates Clinton's position.”

Qiu also stated, “Advocating for exceptions could theoretically encompass a due-date abortion, but Rubio's conclusion that Clinton supports due-date abortions is not backed by evidence and logically unsound.”

However, quotes from Clinton herself – cited by Qiu – prove that Clinton has supported late-term abortions until the day of birth. This is especially true via the quote Qiu found on October 8, 2000:

I have said many times that I can support a ban on late-term abortions, including partial-birth abortions, so long as the health and life of the mother is protected.

It is therefore very logically sound, and backed by evidence, that Clinton has supported in the recent and non-recent past abortions until the day – and, perhaps, the moment – of a child's birth, since that's what the health “exceptions” would allow.

Does Clinton support “all abortions” until the day of birth? Yes, yes she does

Qiu closed her piece by arguing that Clinton doesn't support “all abortions” until the due date, which is what Rubio claimed, because she supports bans on late-term abortions as long as they have exceptions for the life and health of the mother. However, “health of the mother” exceptions are vaguely and broadly defined by the U.S. Supreme Court in Roe and Doe, as spelled out at the below links by Just Facts (with summaries by Just Facts and links to the original language of the court cases), and thus can mean just about anything:

States … cannot prohibit abortions “where it is necessary, in appropriate medical judgment, for the preservation of the life or health of the mother.”[442] The ruling cites examples of what may be considered harmful to a woman's health. These include the “stigma of unwed motherhood,” the work of caring for a child, and the “distress” “associated with the unwanted child.” [443] [444]

The majority ruled that only the doctor who would perform the abortion needs to determine that the abortion was necessary to preserve the health of the mother. Any abortion provider could make this decision based solely on their “best clinical judgment.” [452]

And what can “best clinical judgment” mean? Just Facts (which is a client of this author separate from LifeSiteNews) has a prominent example:

* Dr. Warren Hern is a late-term abortion practitioner, author of “the nation's most widely used textbook on abortion standards and procedures,” a participant in crafting “the first version of the National Abortion Federation Program Standards for Abortion Services,” and “one of the experts in late abortion sought out by the national media….”[453] [454] In May 1997, he stated:

I say every pregnancy carries a risk of death.[455]

I will certify that any pregnancy is a threat to a woman's life and could cause grievous injury to her physical health. [456]

In addition to the Supreme Court, Guttmacher's 2004 survey of why women had abortions found that “[w]omen also cited possible problems affecting the health of the fetus or concerns about their own health (13% and 12%, respectively).” This means that approximately one in eight abortions are related to “possible problems” related to the health of the mother, which was also broadly defined in the study (and never differentiated “life” of the mother from her “health”):

Concerns about personal health included chronic and life-threatening conditions such as depression, advanced maternal age and toxemia. More commonly, however, women cited feeling too ill during the pregnancy to work or take care of their children.

Finally, Qiu quoted Clinton as saying there are “medical reasons, there are health-related reasons” to support late-term abortions. However, in 1997, as reported by The New York Times:

Ron Fitzsimmons, the executive director of the National Coalition of Abortion Providers, said he intentionally misled in previous remarks about the procedure, called intact dilation and evacuation by those who believe it should remain legal and ''partial-birth abortion'' by those who believe it should be outlawed, because he feared that the truth would damage the cause of abortion rights.

But he is now convinced, he said, that the issue of whether the procedure remains legal, like the overall debate about abortion, must be based on the truth.

Just Facts has provided many other examples of prominent voices that back abortion decrying the medical necessity claims for partial-birth abortion, as well as the medical background showing that late-term abortions are not medically necessary.

Importantly, one organization that concluded in the 1990s that partial-birth abortion is not medically necessary was the pro-abortion organization American College of Gynecologists.

Are abortions done on the day of birth? Why, yes they are

In her piece, Qiu cited Professor Daniel Grossman as saying that regarding having an abortion on the due date, “medically, it does not compute.” Qiu gives Grossman's credentials as being “a professor of obstetrics, gynecology and reproductive sciences at the University of California, San Francisco and an advisor at Ibis Reproductive Health.” Nowhere does Qiu cite Ibis's support for abortion, clarified on its website as the following:

Work to increase access to abortion is Ibis's top priority.

Engaging in a little mind-reading and journalistic jiu-jitsu, Qiu says that “Rubio is suggesting” that abortions are done on the day of birth “to save the life of the mother.” We can only assume Qiu made this statement in reference to Clinton's alleged opposition to late-term abortions except for the health and life of the mother.

“Nobody would talk about abortion on the woman's due date. If the mother's life was at risk, the treatment for that is delivery, and the baby survives,” Qiu quotes Grossman. “Medically, it does not compute.”

While it is a relief for Grossman to admit what abortion supporters refused to admit in the 1990s and 2000s – that grisly partial-birth abortions are not medically necessary – Qiu failed to note that abortions have been done on babies that have both briefly and ultimately survived post-abortion, and that partial-birth abortion was a reality until the federal ban was upheld by the Supreme Court in 2007.

There are also many examples of babies who survived abortions and were later killed by abortionists. The most famous example of this treatment was done at the hands of convicted murderer Kermit Gosnell. It is also worth noting that President Obama infamously opposed a bill in the Illinois legislature that would have required saving a child who survived an abortion, and that a Planned Parenthood lobbyist in Florida declined to tell state legislators whether she thought doctors should have to save babies who survive abortions.

All of this to say: abortions have been, are, and probably will be done on the day of birth.

Qiu entitled one of her sections “When abortions can be performed.” She starts off that section by looking at where and when abortions can legally be performed – a complicated issue that ignores the aforementioned Gosnell scenarios and those like it, when abortions are illegally done – and also ignores that the debate between Clinton and Rubio on abortion is about Clinton's support for abortion, not what her interpretation of current law is.

In addition to being factually off base, Qiu regularly used imprecise language. At times, she noted that Rubio declared that Clinton supports “all abortions” until the day of the birth, yet she also wrote this:

Rubio casts this position as the equivalent of supporting abortions on the due date, but that exaggerates Clinton's position.

In fact, Rubio's statement accurately describes Clinton as a supporter of abortions on the due date. And, as noted above, the broad definition of health exceptions makes it clear that Clinton supports abortion anytime, anywhere.

Bias was also clear when Qiu failed to describe Grossman as an abortion supporter who works for a pro-abortion group – and, likewise, when she failed to note Guttmacher as an abortion-supporting organization whose core principles include standing behind abortion. (She called it a “reproductive health nonprofit,” which is misleading to an uneducated reader – “pro-abortion research group” would be most accurate.)

Just Facts has described Guttmacher in a culturally neutral fashion Qiu could have used: “The Guttmacher Institute is a research organization that operates under 'guiding principles' that include support for legalized abortion.”

Qiu seemed to have no issue using negative language when it came to Rubio's pro-life beliefs, which she referred to as “anti-abortion” positions.

Fact-checking the fact-checkers: Did an abortion defunding bill try ‘to redefine rape’?