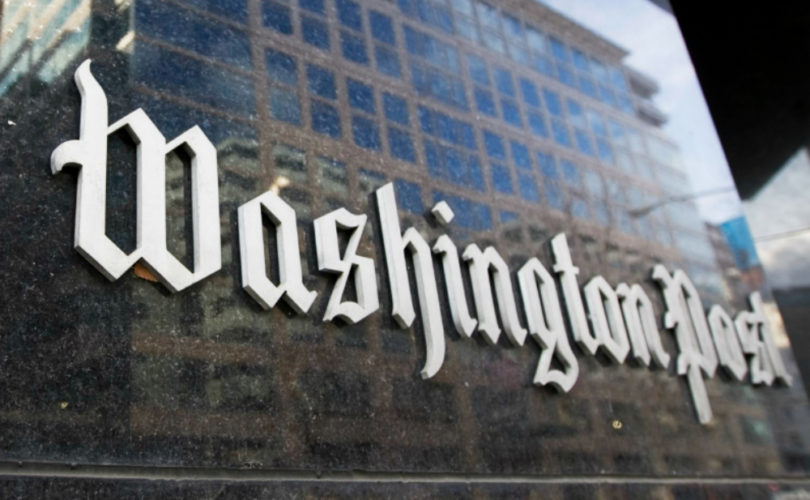 December 23, 2015 (LifeSiteNews) – Pro-abortion bias has once again reared its ugly head at The Washington Post, in a double-standard that undermines the journalistic principles of the paper and the credibility of the rest of the publication's reporters and editors — and is ill-timed, given the media bias controversy over a now-pulled Post editorial cartoon that portrayed Sen. Ted Cruz's, R-TX, children as chained monkeys.

Yesterday, the Post's Niraj Chokshi reported on an Associated Press-Gfk (AP-Gfk) poll that found 58 percent of Americans support abortion being legal “most” or “all” of the time — a seven percent jump from January of this year — compared to 39 percent who believe it should be illegal “most” or “all” of the time, a drop of six percent. Toward the end of his piece, Chokshi noted the poll was conducted shortly after a deranged man engaged in a shoot-out with police at a Colorado Planned Parenthood clinic.

On Nov. 27, an armed gunman stormed a Planned Parenthood clinic in Colorado Springs, killing three and injuring at least nine others. The suspect in the incident, Robert Lewis Dear Jr., used the phrase “no more baby parts” to explain his actions, according to law enforcement.

The poll was conducted days later, from Dec. 3 to Dec. 7, with 1,007 adults interviewed. The margin of sampling error is 3.4 percentage points. Respondents were chosen randomly by phone or by mail and then subsequently interviewed online.

Somehow, Chokshi didn't see fit to report that Dear is almost certainly mentally unstable, with a history of unstable activity. Furthermore, the “no more baby parts” quote was reported anonymously and significantly qualified. From The New York Times:

But one senior law enforcement official, who would speak only anonymously about an ongoing investigation, said that after Mr. Dear was arrested, he had said “no more baby parts” in a rambling interview with the authorities.

The official said that Mr. Dear “said a lot of things” during his interview, making it difficult for the authorities to pinpoint a specific motivation.

Despite being Tweeted about Dear's mental instability, Chockshi has not updated his article.

Chokshi also failed to note that the poll found a plurality of respondents — 37 percent — supported abortion laws being more strict, with 32 percent of people believing the status quo is acceptable, and 27 percent believing laws should be loosened.

Chokshi does deserve credit for a little bit of intellectual honesty, which closed out the article:

The rise in abortion support in the latest AP-Gfk survey may be fleeting. Research has shown that Americans’ attitudes regarding abortion have been relatively consistent over the decades, despite the occasional fluctuation.

Chokshi's mis-reporting would be bad enough on its own. However, it also highlights a double-standard of poll reporting and analysis at the Post that definitively favors promotion of the abortion industry.

Just a week before Chokshi's article was published, one of the Post's fact-checkers, Michelle Ye Lee, hammered a Robert Morris University (RMU) poll for alleged inaccuracy because the poll was conducted online.

While online surveys typically have issues of response bias, RMU professor Philip Harold (disclosure: Harold was briefly a client of mine, to promote the RMU poll; the contract was fulfilled two weeks ago, and has no bearing on this post) told Lee in an e-mail that his poll's response bias was negated by other factors:

Of course online polling began by simply putting polls out there and people deciding whether to complete the survey or not – opting in or opting out.  This is an unscientific straw poll suffering from self-selection bias, which is not representative of anything.  Our poll is not that at all; we make very specific invitations to a randomly selected group of panel members.  So while respondents originally opted to join the panel of millions of Americans, they were randomly selected by invitation to complete a survey designated for them, so it does not qualify as an opt-in survey.  We hire a polling firm to run our polls; they in turn work with the firms who provide the panels.

Despite exchanging numerous e-mails with Harold, Lee concluded that the RMU poll “does not meet The Post’s methodology standards, as it was conducted as an opt-in Internet panel and was not based on a probability sample of U.S. adults. We’ve repeatedly warned readers about such panels, which have led to cautions by the American Association for Public Opinion Research.”

In an e-mail to LifeSiteNews, Harold explained that Lee's attacks on his work contrast sharply with Chokshi's uncritical citation of the AP poll — a poll that Harold noted “absolutely” violated the Post's alleged poll standards.

This bias by Lee and the Post's editors isn't limited to the AP-Gfk poll. The article cited by Harold is just one example of an online poll that was uncritically cited by the news outlet. This article, which used a biased website with a woefully inadequate methodology to claim there has been an average of one mass shooting per day in America in 2015, is another recent example.

Lee is not alone in her error-filled approach to “fact-checking” the abortion issue — her former colleague, Sarah Kliff, had similar issues when comparing studies on contraceptives and abortion — but she and her editors clearly need to figure out what their “standards” are.

Lee's practice of undermining pro-life data is not new. Earlier this year, she “fact-checked” whether unborn children feel pain. Despite exchanging many e-mails with Just Facts president James Agresti (again, a client whose inclusion in this piece is separate from any professional relationship) about a flawed study and the generally flawed premise of her analysis, Lee cited disbelief in fetal pain as equal to the scientifically proven pain felt by unborn children.

She also uncritically cited a study with enormous flaws — which she was aware of — and the American College of Gynecologists, which is well-known for its pro-abortion, pro-Democratic Party bias. And her “update” to her initial fetal pain assessment was based upon information she had received before publishing her original piece — and readers were not made aware of the update.

Later in the year, on August 12, Lee concluded Planned Parenthood's claim that 3 percent of its services are abortion is “misleading.” Six days later, I contacted her and her boss, Glenn Kessler, to let them know that the 3 percent claim is not misleading — it's flat-out wrong, if for no other reason than that, as I e-mailed, “many of the FDA's 'contraceptives' are actually abortifacients” because the FDA does not differentiate between drugs and devices that prevent the creation of life… and those that end it.”

Neither Lee nor Kessler responded to my e-mail, and Lee's piece was never updated.

Finally, last week, Lee claimed in an e-mail to Harold that “the current funding situation for [Planned Parenthood]” is that Planned Parenthood “receive[s] tax $ for healthcare services but not for performing abortions…”

Lee doubled down on this false statement, declaring no abortion funding for Planned Parenthood to “be the status quo.”

However, as acknowledged by Planned Parenthood CEO Cecile Richards in testimony to the House Oversight & Government Reform Committee, “federal funds pay for abortion services at PP or anywhere else…in the very limited circumstances allowed by law.”

That law is the Hyde Amendment, which for nearly 40 years has officially allowed federal funding for abortions only in the case of rape, incest, and life of the mother.

Chokshi, Lee, and others violated the Post's standards of credibility

According to the Post's official Standards and Ethics, “Reporters and editors of The Post are committed to fairness. While arguments about objectivity are endless, the concept of fairness is something that editors and reporters can easily understand and pursue. Fairness results from a few simple practices:

“No story is fair if it omits facts of major importance or significance. Fairness includes completeness.

“No story is fair if it includes essentially irrelevant information at the expense of significant facts. Fairness includes relevance.

“No story is fair if it consciously or unconsciously misleads or even deceives the reader. Fairness includes honesty – leveling with the reader.

“No story is fair if reporters hide their biases or emotions behind such subtly pejorative words as “refused,” “despite,” “quietly,” “admit” and “massive.” Fairness requires straightforwardness ahead of flashiness.”

In his story, Chokshi declined to inform readers of Dear's mental illness and how a plurality of Americans support greater regulations on abortion. Likewise, several of Lee's “fact-checks” have relied heavily on misdirection and omission of evidence contrary to the conclusion she desires the reader to come to.

Beyond the editorial standards listed above, Post editors have allowed polls using similar or the same methodology as the RMU poll to be uncritically cited, yet allowed Lee to malign one with a conclusion she didn't like. And Lee's lack of knowledge on basic facts of abortion funding is concerning in the extreme.